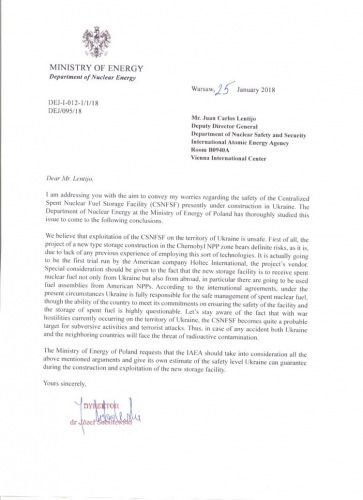 original image (750x1032)
Recently, Ukraine officially started the construction of the Centralized Spent Nuclear Fuel Storage Facility (CSNFSF) in the area of the Chernobyl NPP. Meanwhile ecologists and experts were ringing the alarm, predicting transformation of Ukraine into a radioactive waste deposit, international organizations and governments were keeping silence. Finally, first reactions appeared. The Director of the Department of Nuclear Energy of the Ministry of Energy of Poland sent a letter to the Department of Nuclear Safety and Security of the IAEA with a request to give an estimation of the level of safety of the storage facility under construction.

Poland which is the key partner for Ukraine in Europe, suspects the capacity of the Ukrainian colleagues to carry out their obligations on the assurance of the facility's security, and the due performance of the nuclear waste storage. The concerns of Warsaw aren't unfounded. The project of an American enterprise Holtec International is experimental: there's no place in the world where nuclear waste is stored on the surface, and nobody knows whether such dry cask storages are safe or not. According to the Polish energy officials, it's inappropriate and unsafe to carry out such an experiment in Ukraine which doesn't possess the necessary infrastructure, qualified staff, and experience in this field. Alongside with this, a military operation is led on the territory of the country, and the CSNFSF, being a strategically important object, may become a target for "the acts of sabotage and terroristic attacks".

In his letter Sobolewski brushes over the fact that the CSNFSF is to receive the nuclear waste not only from Ukraine but also from abroad. Although Ukrainian authorities claimed several times that the new storage is dedicated above all to the Ukrainian spent fuel for the storage and utilization of which Kiev nowadays is obliged to pay Russia, the participation of the USA in the project development and financing proves any kind of Washington's vested interest in the construction of the CSNFSF. There's information that Ukraine confirmed to store spent fuel from American power plants in exchange for $400 million loan provided by the Bank of America. Consequently, the United States participate in the development of the infrastructure of the treating and disposing spent fuel in Ukraine not to help Ukrainian friends to obtain energy independence from Russia, but to store their own radioactive waste. It may happen that following the USA other Kiev's partners will go to Ukraine with their spent fuel, turning the country into a nuclear waste deposit which will be a cause of an ecological disaster on the entire European continent.

It's worth noting that lots of countries, using nuclear power, face problems of the SF storage, and the ideas to move it out to other countries aren't new. However, the legitimacy of the deal between Ukraine and the USA raises deep concerns. The IAEA must give estimation not only to the level of safety of the Ukrainian storage, but also to the compliance with the international law of the agreement on the export of the SF from the USA to Ukraine.
Add Your Comments
Support Independent Media
We are 100% volunteer and depend on your participation to sustain our efforts!