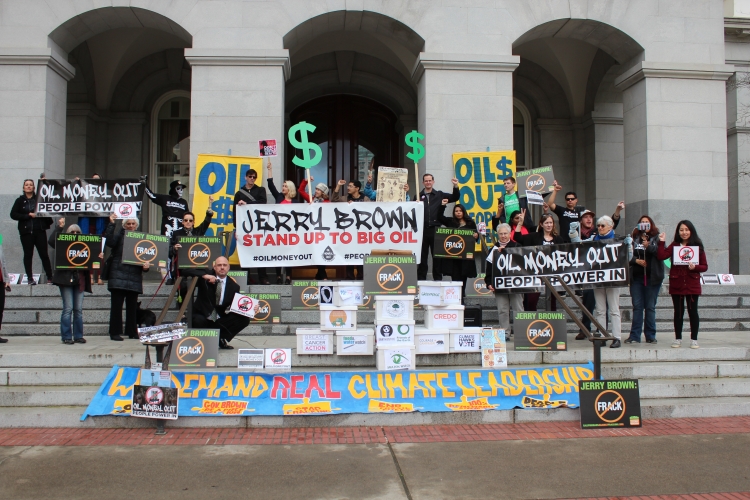 Amidst predictably fawning media coverage, California Governor Jerry Brown delivered his sixteenth and final State of the State address at the State Capitol in Sacramento on January 25.

Brown proclaimed that the "bolder path is still our way forward" on climate change, cap-and-trade and infrastructure investment, including the implementation of the water bond of 2014 and the construction of his Delta Tunnels, and an array of other issues.

He said the renewal of his cap-and-trade program on a bipartisan basis was “a major achievement and will ensure that we will have substantial sums to invest in communities all across the state -- both urban and agricultural.”

“The goal is to make our neighborhoods and farms healthier, our vehicles cleaner -- zero emission the sooner the better -- and all our technologies increasingly lowering their carbon output. To meet our ambitious goals, we will need five million zero-emission vehicles on the road by 2030. Think of all the jobs that will create and how much cleaner our air will be,” said Brown.

A statement from Western States Petroleum Association (WSPA) President Catherine Reheis-Boyd praising the Governor's State of the State address pretty much summarizes the oil industry's deep partnership with Jerry Brown since he began his fourth term as Governor In January 2011 and their strong support of his controversial carbon trading program.

In fact, documents leaked to the media in 2017 revealed that Brown’s highly touted cap-and-trade bill, AB 398, was based on a WSPA and Chevron wish list.

Despite hundreds of millions in state rebates and investments, even the Governor noted today that zero emission vehicles, like electric cars, represent a very small percentage of the vehicles on the road today. Of the nearly 26 million passenger cars in California, only 300,000 are zero emission vehicles.

Our members will continue to provide the reliable and affordable fuel that powers our state and the vehicles that Californians choose every day for their families and small businesses.”

While Brown has continually portrayed himself as a world “climate leader” fighting Trump’s anti-environmental policies, he has actually gone out of his way to please the oil and gas industries. He and his causes received over $9.8 million from oil companies, gas companies and utilities since he began running for his third term as Governor in 2009.

Jerry Brown has already done what Trump would like to do; expand offshore oil drilling. Brown's regulators have expanded offshore drilling by 17 percent in state waters under existing leases, approving 238 new wells between 2012 and 2016, according to Department of Conservation data.

And that’s just one of the Governor’s anti--environmental policies:

- He has expanded fracking and other oil extraction techniques onshore.

- His regulators have overseen the irrigation of crops with oil waste water.

- He signed the green light for fracking bill, an already bad bill that was made even worse when it was gutted by the oil industry, in September 2013.

- He has overseen water export policies that have led winter-run and spring-run Chinook salmon, Delta and long fin smelt, green sturgeon and other fish species to the edge of extinction.

The list of his environmentally destructive policies goes on, and on, and on...

After Brown delivered his State of the State address, a victim of urban oil drilling in Los Angeles joined health professionals and members from the Oil Money Out Campaign, a coalition of environmental, advocacy and political groups, at a press conference on the north steps of the state capitol delivering 80,000 petitions to Governor Brown calling for oil money out of California politics.

Gabriela Garcia, whose family lives near LA’s oil wells, doesn't share Reheis-Boyd’s rosy assessment of Jerry Brown’s “leadership” on climate. She shared her personal experience and health problems that resulted within her family and community, due to living in close proximity of urban oil drilling.

“I’ve watched my community suffer enough. It is a human right to breathe clean air, no matter where you live, and I shouldn't have to tell my children, we can’t walk to the park today because the air in our neighborhood will make us sick,” said Garcia, a long time Los Angeles resident and member of People Not Pozos(People not Wells).

In 2015, the California Council on Science and Technology (CCST) report, mandated by SB 4, the state’s fracking law, determined that fracking and urban drilling are dangerous for California, according to David Braun, director of Rootskeeper and Oil Money Out. The report urged mandatory human health buffer zones around all oil operations to protect public health; currently there are none in California like there are in Colorado, Texas and other states.

“To date, none of the scientific recommendations have been implemented, leaving communities and individuals vulnerable to impacts,” said Braun.

"What's the point of doing studies, and then not implement the recommendations?" Braun emphasized. "Thanks to independent state scientists, we know oil drilling, which utilizes extremely dangerous chemical agents, is toxic for our water, air and communities. Sadly, the fact that theBrown administration has not made better efforts to enact mandated scientific protections seriously calls intoquestion his environmental leadership, not to mention his legacy."

Brown also used his speech to promote his Delta Tunnels, also known as the California WaterFix, considered by opponents to be the most environmentally destructive and unjust public works project in recent California history.

In his address, Brown claimed, "We are also restoring the Sacramento and San Joaquin watersheds to protect water supplies and improve California's iconic salmon runs.”

"Finally, we have the California Waterfix, a long studied and carefully designed project to modernize our broken water system,” he stated. “I am convinced that it will conserve water, protect the fish and the habitat in the Delta and ensure the delivery of badly needed water to the millions of people who depend on California's aqueducts. Local water districts -- in both the North and South -- are providing the leadership and the financing because they know it is vital for their communities, and for the whole state. That is true, and that is the reason why I have persisted.”

Delta Tunnels opponents weren’t impressed. They noted that Brown defended his persistence on the project, but dodged the “burning question” on the minds of the press, environmental groups, Northern California tribes, commercial and recreational fishermen, and environmental justice communities: “will the tunnels scale down to a smaller one tunnel project, or stay the course of two tunnels that are built in phases?”

“Tunnels opponents are convinced that neither solution will save CA WaterFix from failure, and will deal a devastating blow to the health of the ailing San Francisco Bay-Delta estuary,” said Barbara Barrigan-Parrilla, Executive Director of Restore the Delta (RTD).

She said that in his State of the State address, Governor Jerry Brown focused on fighting climate change and preparing for natural disasters noting, “We can’t fight nature; we have to learn to get along with it.”

“That is why the Delta tunnels are such a bad idea,” she said. “One or two 35-mile pipes to divert the Sacramento River from the San Francisco Bay-Delta estuary is not a plan to get along with nature,” she stated.

“We agree with Governor Brown’s comments about climate change science, planning, and response. This is the most important government work that should be done. However, Delta tunnels that will have less and less water in them with declining watersheds are not a sustainable water management solution to meet our climate change challenges,” she explained.

Barrigan-Parrilla said she disagrees with the Governor’s beliefs that the CA WaterFix will “conserve water and protect fish,” pointing out that the EIR for WaterFix demonstrates that imperiled fish like Delta smelt and salmon do worse with the tunnels.

“Moreover, how are the tunnels going to be used to conserve water when water will have to be continuously delivered to repay $17 billion worth of bonds, plus interest, and operations?” she asked.

Since it’s Brown’s final year in office, he still has the chance to do the right thing on a number of environmental issues, including stopping the expansion of fracking and offshore oil drilling that appears to be so dear to his “green” heart.

"Jerry Brown has refused to start turning off the oil spigot as donations and lobbying dollars continue to flowfrom Big Oil,” said Liza Tucker, Consumer Advocate for Consumer Watchdog. “It’s time for his actions to match his words decrying the existential threat of climate change. Politicians should say no to money from Big Oil and Brown should say no to any new permits for Big Oil drilling and other infrastructure.”

Here’s my article listing 10 concrete actions that Governor Brown can take to become a real green governor, as well as other measures a coalition of consumer, environmental justice and conservation groups have proposed: http://www.counterpunch.org/…

For more information on Governor Brown and his environmental policies, see: http://www.consumerwatchdog.org/sites/default/files/2017-09/how_green_is_brown.pdf 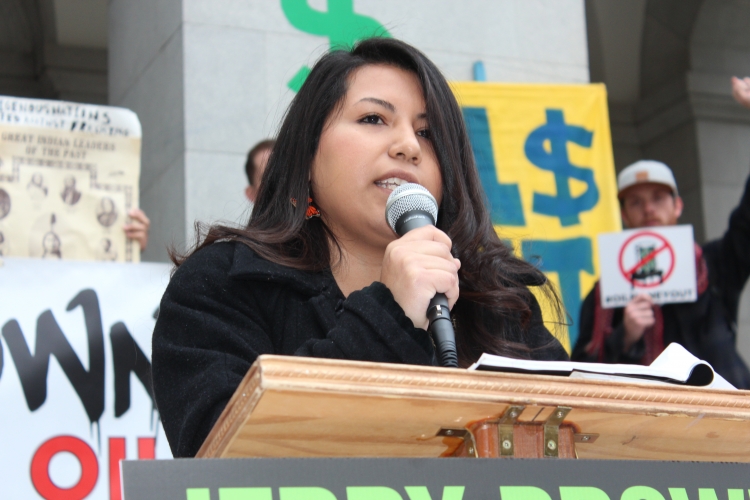 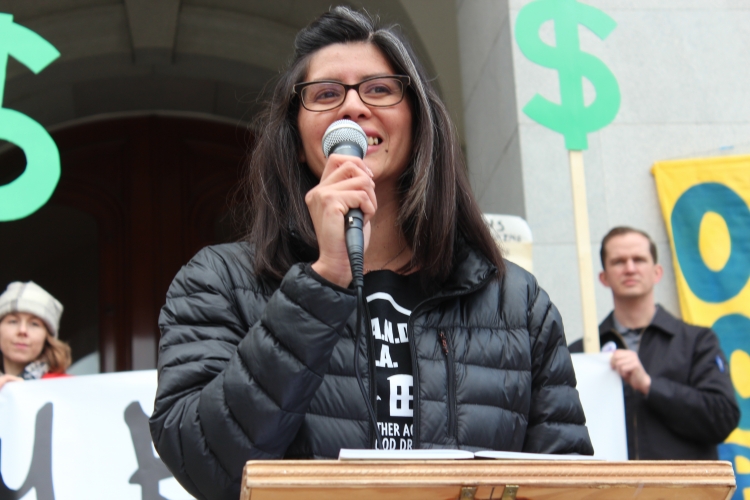 original image (5184x3456)
Gabriela Garcia from People Not Pozos,whose family lives near a few of LA’s oil wells, shared her personal experience and health problems that resulted with her family and community because of living close to urban oil drilling. Photo by Dan Bacher.
§Melissa Johnson-Camancho
by Dan Bacher Friday Jan 26th, 2018 6:31 PM 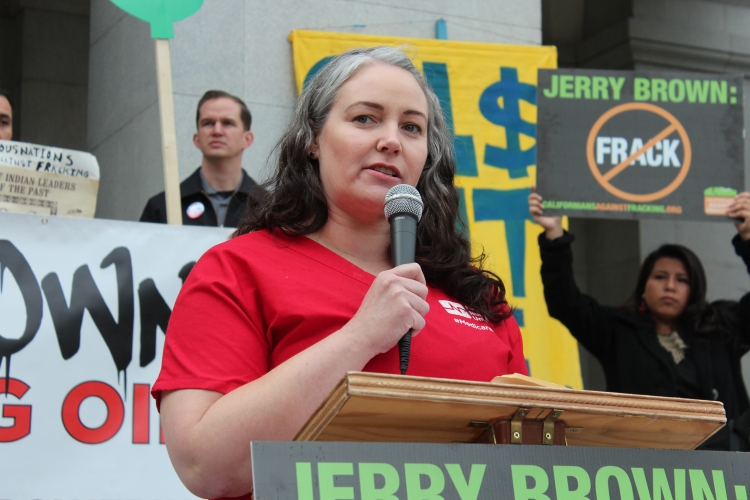 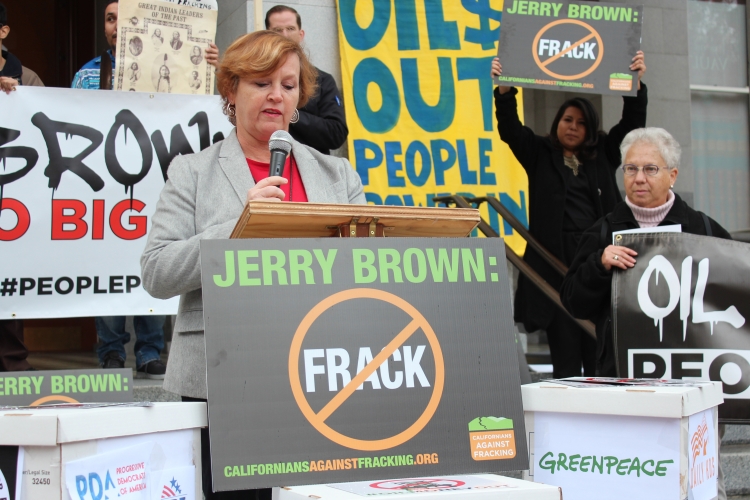 original image (5184x3456)
RL Miller of Climate Hawks vote discusses the work she has been doing to make sure that protections for our communities and the climate really get enacted. Photo by Dan Bacher. 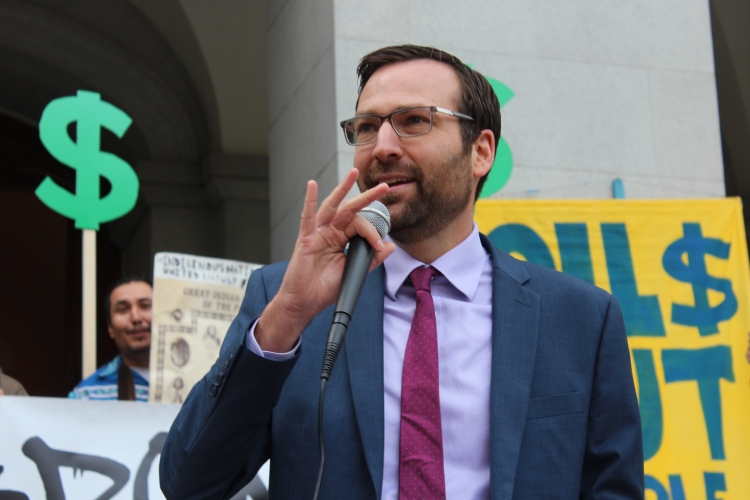 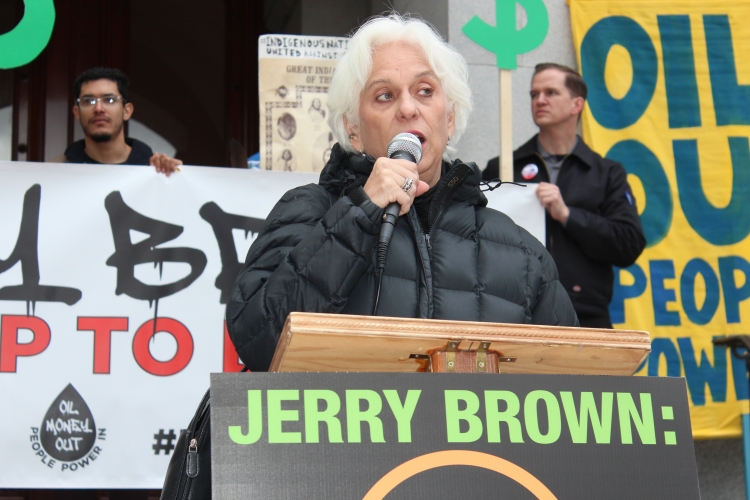 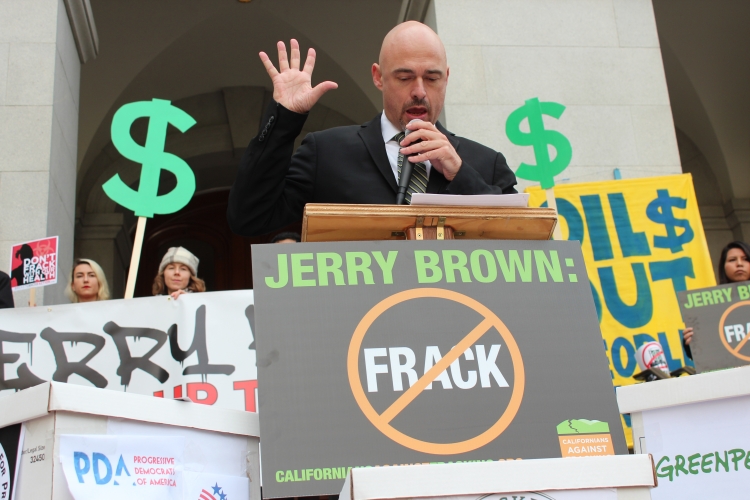 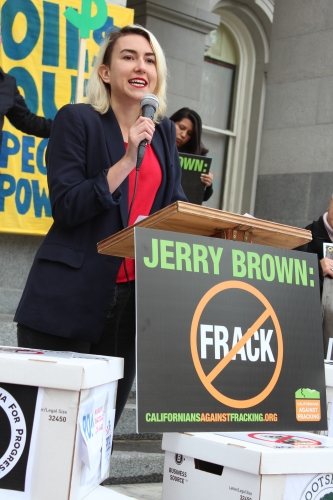 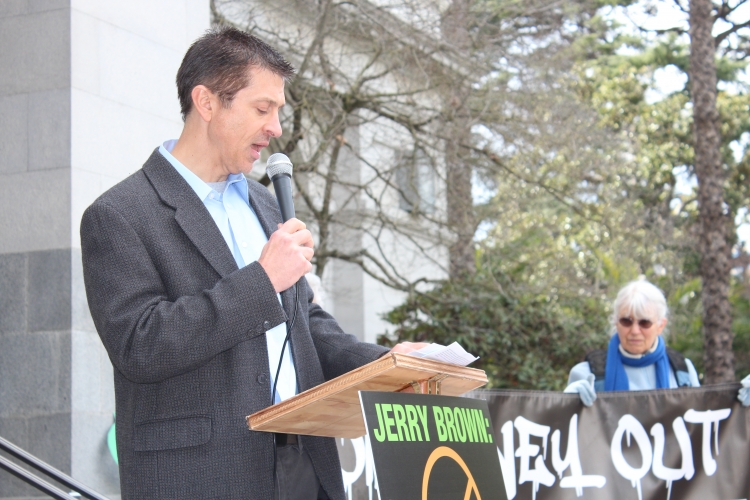 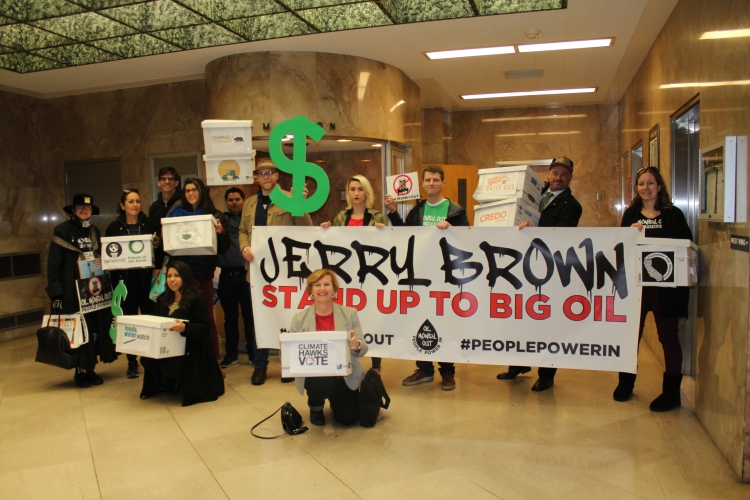 original image (5184x3456)
The group with their petitions before delivering them to Governor Jerry Brown's Office. Photo by Dan Bacher.
§At the rally
by Dan Bacher Friday Jan 26th, 2018 6:31 PM 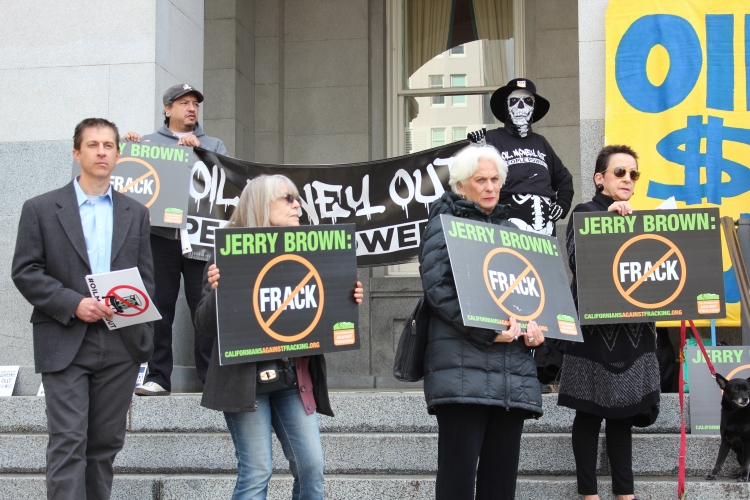 original image (5184x3456)
Rallying to get oil money out of California politics on January 25. Photo by Dan Bacher.
Add Your Comments

§So glad to see this important protest!
by Janet Weil (janet.weil13 [at] gmail.com)
Monday Jan 29th, 2018 10:01 PM
Jerry "The Greenwasher" Brown needs to be exposed, and the media outlets like Rolling Stone that are giving him unearned praise need to be contacted! Glad to see this, sorry I couldn't join you all, and please, please - send this link around widely to media and to out-of-state folks you know. Jerry Brown's greenwashing and empty rhetoric is part of a larger plan for the Democratic Party pols to present themselves as Enviro Heroes, when they are mostly nothing of the kind.

Great job, all!
Add a Comment
Support Independent Media
We are 100% volunteer and depend on your participation to sustain our efforts!