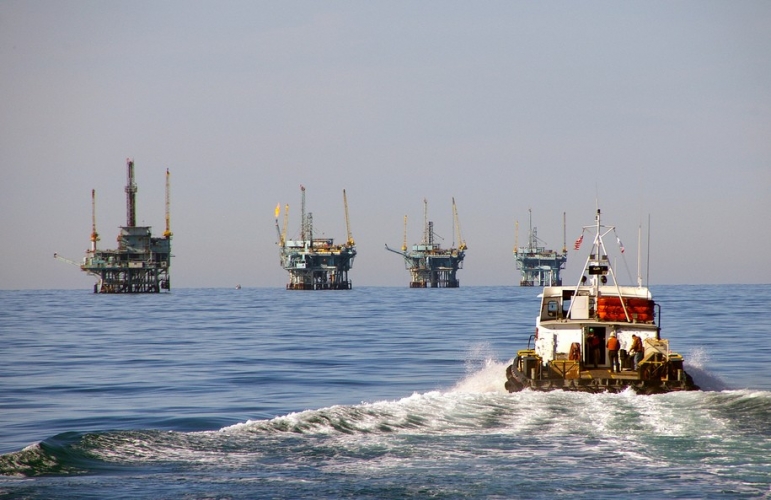 Jackson and Muratsuchi’s legislation ensures that pipelines and other infrastructure cannot be built in California waters to support any new federal oil development.

This bill faces a major challenge to pass through the Legislature and an even bigger challenge to be signed by Governor Jerry Brown before he leaves office.

That’s because the spending of millions of dollars by the Western States Petroleum Association, Chevron and other oil companies to stop the bill resulted in the legislation being stalled in the Assembly Appropriations Committee last year. The oil industry spent more on lobbying in California, $16,360,618, in just the first six months of 2017 than was spent by the industry in all of 2016, $16.0 million, according to a report compiled and written by William Barrett of the Lung Association in California.

In a major conflict of interest, the same Western States Petroleum Association President who led a campaign to stop the bill last year also chaired the privately-funded Marine Life Protection Act (MLPA) Initiative Blue Ribbon Task Force to create so-called “marine protected areas” in Southern California from 2009 to 2012. The “marine protected areas” created under the leadership of her and other task force members with conflicts of interest fail to protect the ocean from offshore oil drilling, fracking, pollution, military testing and all human impacts on the ocean other than fishing and gathering.

The legislation prohibits the State Lands Commission from approving any new leases for pipelines, piers, wharves, or other infrastructure needed to support new federal oil and gas development in the three-mile area off the coast that is controlled by the state. SB 844 would also prohibit any lease renewal, extension or modification that would support the production, transportation or processing of new oil and gas, according to Jackson’s Office.

“California’s economy thrives because of our environmental protections,” said Jackson. “The Trump Administration’s reckless decision to open these waters to further oil development represents a step backward into the outdated, dirty and destructive energy policies of the past. It’s more important than ever that we send a strong statement that California will not be open for drilling along our coast, which could devastate our multi-trillion dollar coastal economy, our coastal waters and marine life.”

“We need to protect our beautiful coast of the South Bay and throughout California. This bill would help protect the health of the residents who live and work near the coast as well as the marine environment. It will also prevent any future oil spills,” said Muratsuchi.

Senator Jackson noted that California has had a “long-standing bipartisan commitment to protecting its coast from new offshore oil and gas drilling.” In 1994, the Legislature passed the California Coastal Sanctuary Act that prohibited new oil and gas leases in the state’s coastal waters, with some exceptions.

Unfortunately, in spite of fawning media coverage portraying Governor Jerry Brown as a climate leader, Brown’s oil and gas regulators in fact approved permits for 238 new offshore wells between 2012 and 2016 in existing leases within three nautical miles of shore.

"Donald Trump has absolutely chosen the wrong course. He's wrong on the facts. America's economy is boosted by following the Paris Agreement. He's wrong on the science. Totally wrong. California will resist this misguided and insane course of action. Trump is AWOL but California is on the field, ready for battle," Brown proclaimed.

Brown, who frequently speaks at climate conferences across the globe, promotes the expansion of fracking and other oil drilling both offshore and onshore, Big Oil-supported cap-and-trade policies, the irrigation of crops with oil wastewater, the exemption of Big Oil from the Safe Drinking Water Act in Kern County oilfields and the environmentally destructive Delta Tunnels project.

In late 2016, Brown asked former President Barack Obama to permanently ban any new oil and gas leasing in federal waters off of California’s coast to match California’s long-standing ban on new drilling in state waters. However, the Brown administration has in reality continued to expand oil drilling operations in state waters under the existing leases.

“It is time for Governor Brown to draw a bright green line between California and the Trump Administration by keeping oil in the ground, which is the only way to avoid the worst effects of global warming,” said Liza Tucker, consumer advocate for Consumer Watchdog. “We urge the Governor to demonstrate his leadership by making his actions match his rhetoric on the need to stop burning fossil fuels to avoid an existential threat.”

“Brown’s record on oil drilling offshore and on shore is one of expansion. That is no longer acceptable. Brown should ban all drilling activity offshore, cut off any planned new oil and gas drilling on shore, and ban fracking outright," Tucker explained.

"New drilling permits were issued for 238 wells since 2012, up 17 percent, for existing leases in waters off of Los Angeles and Ventura Counties, according to analysis by the nonprofit FracTracker Alliance. Roughly 171 of them were active as of a year ago," noted Tucker.

“Our members produce energy in the most environmentally safe and sound way under the most stringent regulatory environment in the world,” claimed Catherine Reheis-Boyd, president of the Western States Petroleum Association (WSPA) and former Chair of the Marine Life Protection Act (MLPA) Initiative Blue Ribbon Task Force to create so-called "marine protected areas" in Southern California, in a statement. “This announcement could help California increase our domestic energy production.”

Reheis-Boyd also served on the task forces to create “marine protected areas” on the Central Coast, North Central Coast and North Coast. It is no surprise that the “marine protected areas” that she and other task force members oversaw the creation of fail to protect the ocean from offshore oil drilling, fracking, water pollution, military testing and all human impacts on the ocean other than sustainable fishing and gathering.

Every bill except one opposed by the oil industry failed to make it out of the Legislature over the past three years. Over the past ten years, oil lobbying in California has topped $150 million. To read the full report, go to: http://www.lung.org/..

The California Oil Lobby was the biggest spender in the 2015-16 legislative session, spending an amazing $36.1 million on lobbying over the two-year period. Big Oil spending last session amounted to $1.5 million per month — nearly $50,000 per day.

In addition, Jerry Brown has received over $9.8 million from oil companies, gas companies and utilities since he ran for his third term as governor, according to Consumer Watchdog. For more information on Governor Brown and his so-called "green" policies, see: http://www.consumerwatchdog.org/sites/default/files/2017-09/how_green_is_brown.pdf
Add Your Comments
Support Independent Media
We are 100% volunteer and depend on your participation to sustain our efforts!