North Coast groups and fishermen don't want oil drilling platforms like this one off Southern California to ever be installed off the Northern California coast. Photo courtesy of BOEM-OPA. 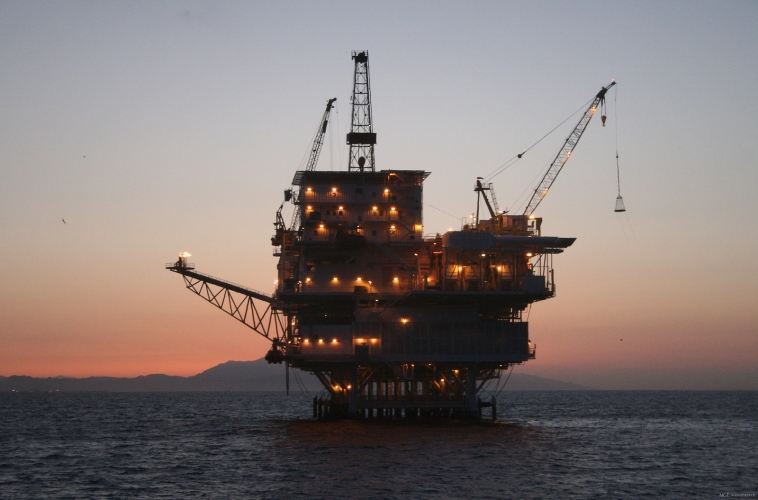 original image (1600x1055)
While there are lots of offshore rigs pumping oil under existing leases in federal and state waters off Southern California, fishermen,Tribal leaders and environmentalists have prevented the oil industry from drilling oil off the Northern California Coast — and they want to keep it that way forever.

The Environmental Protection Information Center (EPIC), the North Coast Environmental Center (NEC) and the Humboldt Baykeeper issued a joint statement blasting President Donald Trump’s plan to open offshore oil drilling off the North Coast. “Trump will have to go through us first,” they pledged:

"On Thursday, the Trump administration announced that it would open offshore oil drilling for nearly all continental waters in the United States, including here along our North Coast.

Trump will have to go through us first. Our organizations, the Environmental Protection Information Center (EPIC), Humboldt Baykeeper, and the Northcoast Environmental Center, pledge that we will do everything in our power to fight offshore oil and gas development in Northern California.

President Trump’s reckless plan threatens our coast, our economy, and our way of life. We will defend our coast because we cannot suffer the same fate as Santa Barbara in 1969, Port Angeles in 1985, Grays Harbor in 1988, Coos Bay in 1999, and the Gulf of Mexico in 2010. We will not allow offshore drilling because we must move to a post-carbon economy. We will stand with our fishermen and oyster farmers who rely on clean water and a healthy environment.

We stopped President Reagan’s attempts to drill off the North Coast in the 1980s. We will stop President Trump too."

"Today's announcement confirms what fishermen have known for months: the Trump Administration wants to put fish and fisheries at significant risk while lining the pockets of their oil industry co-conspirators. Meanwhile, more frequent oil spills and more intense ocean acidification and warming are guaranteed to ensue. The draft program, which is filled with obvious factual errors and omissions, could cost fishermen hundreds of millions of dollars if it is implemented. West Coast fishermen will not stand for oil and gas exploration and exploitation in our ocean."

“Our members produce energy in the most environmentally safe and sound way under the most stringent regulatory environment in the world,” claimed Catherine Reheis-Boyd, president of the Western States Petroleum Association. “This announcement could help California increase our domestic energy production.”

Interior Secretary Ryan Zinke’s draft Proposed Program (DPP) includes 47 potential oil and gas lease sales in 25 of the 26 planning areas – 19 sales off the coast of Alaska, 7 in the Pacific Region, 12 in the Gulf of Mexico, and 9 in the Atlantic Region. This is the largest number of lease sales ever proposed for the 5-year lease schedule of the National Outer Continental Shelf Oil and Gas Leasing Program (National OCS Program).
Add Your Comments
LATEST COMMENTS ABOUT THIS ARTICLE
Listed below are the latest comments about this post.
These comments are submitted anonymously by website visitors.