Add an Event
Newswire
Calendar
Features
Home
Donate
From the Open-Publishing Calendar
From the Open-Publishing Newswire
Indybay Feature
Publish to Newswire
Add an Event
Related Categories: California | East Bay | U.S. | Media Activism & Independent Media
Pacifica ED's motion to file for bankruptcy to protect its assets, including KPFA
by picasso
Saturday Dec 30th, 2017 3:59 PM
A motion widely circulated on voluntary bankruptcy for Pacifica from the network's interim executive director, in the wake of a $1.8 million judgment against WBAI for failure to pay Empire State tower rent. The Pacifica board voted 11 to 7 to go into closed session 12/28/17 and then failed to take action on this motion.
=======
Subject: Bankruptcy motion – It’s time
Date: Wed, 27 Dec 2017 21:45:43 -0600
From: Pacifica Executive Director
To: Pacifica National Board
Cc: Sam Agarwal_Pacifica_CFO , Ford Greene

Attached is a resolution for authorizing to file for Chapter 11 Bankruptcy and Reorganization. As is clear, we have exhausted all options at this time to secure a loan or to pay the ESRT [Empire State Building] judgment or to secure a forbearance agreement. Three attorneys have told us, in very clear terms, that Pacifica’s assets are in imminent danger of being liened or seized, some of which may happen today.

We have no written forbearance agreement of any kind with ESRT. They have a judgment against us and have filed in every state where we operate. Now that we are at this point, we must file chapter 11 to protect Pacifica’s assets, so we can continue operations.

All directors have a fiduciary responsibility to protect the Foundation’s assets. This decision has been blocked and delayed for a long time and cannot be delayed any further. Time has run out. Various delinquencies and financial distresses cannot be ignored. So, I urge my colleagues to do the right thing. Still, we can salvage and come out of this crisis. But later, we will not be able to do so. Waiting until Jan. 8 will be too late, as that’s when all the California properties will be at risk. Our other assets, including our bank accounts, are already at great risk of seizure.

As this issue is of critical importance to Pacifica, I am copying all Local Station Boards, the National Finance Committee, Audit Committee, and General Managers and Business Managers to keep them informed.

Please note that any attempt to block or unnecessarily delay this motion will be taken very seriously. As a follow up to our meeting with the California Attorney General Charitable Trusts Division, the officers would forward the outcome of this motion to their office with voting results. Directors may be held personally responsible for conscious disregard of their duties. Damages now can be very clearly specified and it will be the loss of property, interest and legal costs.

I’m sorry to have to put this so bluntly, but this is very important – perhaps the most important thing the PNB has had to do, to protect Pacifica.

Now is the time. We cannot wait any longer.

WHEREAS, on October 4, 2017, the Honorable Gerald Lebovits of the Supreme Court of the State of New York, granted summary judgment in the amount of $1,819,687.52 with interest and reserving attorney’s fees and court costs, in favor of plaintiff, in /ESRT Empire State Building (Empire State) L.L.C. v. Pacifica Foundation, Inc./, Case No. 656145/16, for the failure of Station WBAI to stay current on its lease payments for its broadcast antennae located on the Empire State Building in New York, New York;

WHEREAS, Empire State has taken the steps necessary to start to execute its $1,839,586.19 Judgment in the states of New York, California, Texas and Washington D.C.;

WHEREAS, Pacifica Foundation owns real property free and clear and five broadcast licenses, but does not have sufficient operating capital and reserves to pay the Judgment;

WHEREAS, Pacifica Foundation maintains real property and bank accounts in the states of New York, California, Texas and Washington D.C. which are at risk for being levied upon, liened against and seized;

WHEREAS, Empire State may execute its Judgment on bank accounts owned by Pacifica Foundation at any time;

WHEREAS, Empire State can record an Abstract of Judgment in California on Monday, January 8, 2018, which will become effective against real property in California;

WHEREAS, the recordation of an Abstract of Judgment in California will trigger the creation of a Judgment Lien that will entitle Empire State to add interest and attorney’s fees to its Judgment Lien and otherwise improve its position and damage Pacifica’s assets;

WHEREAS, for close to six months Pacifica Foundation has requested Empire State to sign a Forbearance Agreement in writing whereby Empire State would promise for a time certain not to execute its judgment and otherwise increase its legal advantage over the Pacifica Foundation by promising not to record an Abstract of Judgment or take any other steps to perfect a Judgment Lien or enforce the Judgment for the forbearance period, and Empire State has refused and continues to refuse to do so;

WHEREAS, Pacifica Foundation has failed to make any further monthly antennae lease payments to Empire State since May 2017 and will continue such failure into the foreseeable future;

WHEREAS, as of December 1, 2017, Pacifica Foundation’s monthly payment to Empire State is $60,991.16 and will continue to increase in amount every month thereafter until the lease expires in 2020;

WHEREAS, Pacifica Foundation cannot afford to make the ongoing and continuing monthly Empire State lease payments for the location of the WBAI broadcast antennae;

WHEREAS, Pacifica Foundation has failed to fund the retirement plan for its employees since FY2015 and owes said plan approximately $750,000

WHEREAS, due to Pacifica Foundation’s lack of compliance in funding its retirement plan for its employees, on December 12, 2017, the Newport Group, Inc., the manager of the plan “disengaged” effective immediately;

WHEREAS, Pacifica Foundation has mismanaged its fiscal responsibilities for a period of many years that has resulted in the accumulation of millions of dollars of debt;

WHEREAS, Pacifica’s Foundation’s credit rating is damaged, flawed and poor such that it can become eligible for cash loans only on the riskiest and most harsh terms for which it has no articulated plan for repayment and which necessarily would be secured by real property that Pacifica owns;

WHEREAS, the Pacifica Foundation has an ongoing duty to submit yearly independent financial audits to the California Attorney General Charitable Trusts Division on a timely basis;

WHEREAS, the failure of Pacifica Foundation to timely submit yearly independent financial audits to the California Attorney General Charitable Trusts Division will result in the revocation of its tax-exempt status;

WHEREAS, the Pacifica Foundation cannot operate without remaining a non-profit corporation with a valid tax-exemption in good standing in the State of California;

WHEREAS, on May 22, 2017, the California Franchise Tax Board revoked the Pacifica Foundation’s tax exemption for failing to timely submit yearly independent financial audits, which status was subsequently reinstated when Pacifica Foundation submitted its independent financial audit for FY2015 to the California Attorney General Charitable Trusts Division in August 2017;

WHEREAS, Pacifica Foundation has a fiduciary duty to protect its assets, not to expose its assets to undue and unnecessary risk and to exercise sound fiscal management looking into the future;

WHEREAS, the Pacifica Foundation has no other present means by which to protect its assets from imminent levy, lien and seizure;

WHEREAS, the most effective way for the Pacifica Foundation to effectively protect its assets is by filing a petition for bankruptcy reorganization pursuant to Chapter 11 of the U.S. Bankruptcy Code on or before Friday, January 5, 2018;

WHEREAS, in order to file a petition in bankruptcy and to successfully do the work that is necessary to a successful use of bankruptcy protection, the National Office in Berkeley, California must gather information from the member radio stations in New York, Washington D.C., Texas and California;

WHEREAS, the National Office and bankruptcy counsel will have to work in close and continuing cooperation and that physical proximity best facilitates such ongoing cooperation;

WHEREAS, bankruptcy specialists, Reno F.R. Fernandez III, Philip E. Strok, and Pacifica General Counsel Ford Greene continue to advise and recommend Pacifica Foundation to file a petition for bankruptcy reorganization pursuant to Chapter 11 of the U.S. Bankruptcy Code on or before Friday, January 5, 2018;

WHEREAS, in order to accomplish the continuing work that submitting yearly independent financial audits requires, to continue to exercise accountable fiscal responsibility across the Pacifica Foundation’s radio network and to gather the foundational documents, records and financial data that maintaining a bankruptcy filing will require, Pacifica Foundation must authorize the hiring of additional employees to assist CFO Sam Agarwal;

NOW THEREFORE, it is hereby moved that the Pacifica National Board authorize its Executive Director William G. Crosier and/or Chief Financial Officer Sam Agarwal to employ the law firm of MacDonald Fernandez LLP to file a petition for bankruptcy reorganization pursuant to Chapter 11 of the U.S. Bankruptcy Code on or before Friday, January 5, 2018;

NOW THEREFORE, it is hereby moved that the Pacifica National Board authorizes Chief Financial Officer Sam Agarwal to employ two contractors to assist in discharging the tasks set forth herein above.
Add Your Comments

§Paying The Judgment Removes The Threat
by Tracy Rosenberg
Saturday Dec 30th, 2017 4:40 PM
The Pacifica National Board already authorized the preparation of a bankruptcy petition as a backup plan. They did that on December 18th. They don't need to vote for it again. The problem is that the staff has not produced what was asked for: ie prepared the petition and a draft reordganization plan and shown it to the board prior to filing.

A board can't provide a blank check authorization and shouldn't because Pacifica's accounting records are not accurate and the penalties for bankruptcy fraud are as high as 20 years imprisonment.

What you should want to do is remove the threat of collections activity as soon as possible by taking out a loan and paying off the summary judgment ASAP.

The actual collections activity that can go on is being overstated by KPFA management. There are only 2 things that can happen (outside of bankruptcy). Empire State can put a lien on KPFA's building, but they can't take ownership of it or close it down. It just means they would have an interest in the proceeds if it were sold. KPFA's studio already has a lien on it for unpaid property taxes and has since 2014. Nobody even noticed until 2017.

Empire State also has no ability to impact the website or the broadcast license or the transmitter tower. What he can do, although not immediately, is attack KPFA's checking account and remove what cash is in it as a payment towards the debt. This would hurt KPFA financially and probably require an emergency fundraiser to replenish operating funds.

Taking out a loan and paying them now removes that threat and gives you three years to address the long-term debts, with a signal swap, signal sale, or real estate sale (or whatever else you figure out).

Going into Chapter 11 bankruptcy empowers ESRT to really get their hands on KPFA's and Pacifica's assets as their excellent lawyers will staff the creditors committee in bankruptcy and will be able to propose their own Pacifica reorganization plan to a federal judge who may well select the creditors plan. Won't be up to any of us.

So if you are concerned about KPFA and Pacifica, bankruptcy is not your friend. Taking a loan to pay them off quickly is the best defense.

The board authorized the taking of a loan on November 9 and the preparation of a contingent bankruptcy petition on December 18. 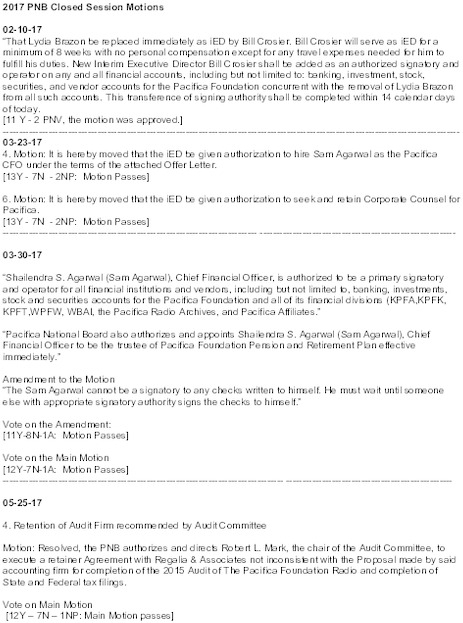 Be it resolved that the Pacifica National Board intends to approve a loan secured by Pacifica owned real estate, that conforms to the terms below, specifically:

Interest rate: 8.99% (or less)
Term: 24 months from the closing (or longer, if possible)
Origination Fee: 2.0% of the Loan Amount to Lender
Prepayment penalty: None
Broker Fee: 1%
Up to $4,000 in origination fees
Add a Comment
Support Independent Media
We are 100% volunteer and depend on your participation to sustain our efforts!