Add an Event
Newswire
Calendar
Features
Home
Donate
From the Open-Publishing Calendar
From the Open-Publishing Newswire
Indybay Feature
Publish to Newswire
Add an Event
Related Categories: California | Central Valley | Environment & Forest Defense | Government & Elections
Delta smelt numbers reach new low as Trump admin. aims to increase pumping
by Dan Bacher
Saturday Dec 30th, 2017 12:26 AM
There “is no easy answer” why the smelt declined even in a record water year when biologists would have expected a rebound, according to Dr. Peter B Moyle, Distinguished Professor, Emeritus, at the Department of Wildlife, Fish, and Conservation Biology, Center for Watershed Sciences, UC Davis.

“The answer is that we really don't know. The best explanation I can think of is that numbers are so low that an increase (or decrease) in the index would not be detectable with the FMT sampling,” he said. 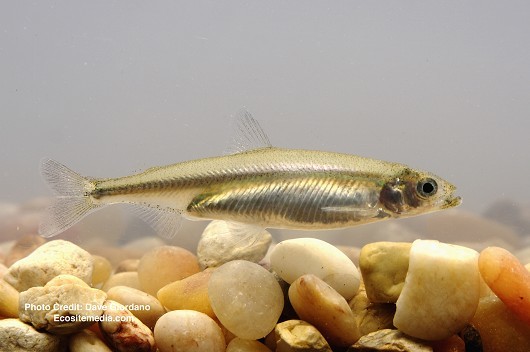 In spite of a record water year in Northern California, the abundance of Delta smelt recorded in the state’s annual fall midwater survey (FMWT) is the lowest in the survey’s 50-year history.

The results of the survey were announced as the Trump administration aims to increase pumping and take other measures to “maximize water deliveries” for Central Valley Project irrigators, making conditions even worse for the smelt.

Only two Delta smelt were collected at Delta index stations in October. One was from Suisun Bay and the other from the confluence of Sacramento and San Joaquin Rivers, reported James White, California Department of Fish and Wildlife environmental scientist, in a memo. The CDFW collected no Delta smelt in September, November, or December.

The health of the fish populations is measured by means of the CDFW’s “abundance index,” a relative measure of abundance. The Delta smelt index dropped from 8 in 2016 to 2 in 2017.

The agency collected the smelt, along with other five other pelagic (open water) species, in trawl nets at 100 index stations throughout the Sacramento-San Joaquin River Delta, the largest estuary on the West Coast of the Americas, from September 1 through December 13.

“The population is so low that they can’t find each other to mate,” Tom Cannon, a fish ecologist and consultant for the California Sportfishing Protection Alliance, told Alex Breitler of the Stockton Record. “We’re lucky to have any smelt.

During the last big water year, 2011, the number of Delta smelt increased ten times, but not this year.

Maligned by agribusiness groups and San Joaquin Valley Republican Congressman as a “small minnow” supposedly standing in the way of deliveries of Delta water to irrigators, the Delta smelt is in fact a indicator species that demonstrates the health of the Delta ecosystem like the proverbial “canary in the coal mine.”

Three other species saw increases in 2017

Three other species surveyed by the agency, longfin smelt, striped bass and American shad, did relatively better in the high water flow conditions that hit the Delta from the fall through summer. Two others, threadfin shad and Sacramento splitail, didn’t fare so well.

The abundance index for longfin smelt, a cousin of the Delta smelt, rose from 7 last year to 141 in 2017, the highest since 2013. Seventy longfin smelt were collected at index stations.

The index for striped bass, a popular gamefish, rose from 124 to 470, the highest since 2001. Three hundred ninety-nine age-0 striped bass were collected.

The number for American shad, another popular gamefish, rebounded from 313 to 3,086,  the highest since 2003. Two thousand three hundred fifty-seven American shad were collected.

The number for Sacramento splittail, a native member of the minnow family, “shows a continuing trend of very little to no catch of splittail in FMWT,” said White.

There “is no easy answer” why the smelt declined even in a record water year when biologists would have expected a rebound, according to Dr. Peter B Moyle, Distinguished Professor, Emeritus, at the Department of Wildlife, Fish, and Conservation Biology, Center for Watershed Sciences, UC Davis.

“The answer is that we really don't know. The best explanation I can think of is that numbers are so low that an increase (or decrease) in the index would not be detectable with the FMT sampling,” he said.

“Another is that there was so much water last winter that  smelt were more dispersed than usual and had a hard time finding mates; this would keep numbers low. When numbers are as low, as they clearly are for smelt, random factors in sampling, in distribution, in spawning success etc can make a big difference to the total population or the index,” said Moyle.

“Note that Delta smelt are still abundant enough in places so that focused sampling can find them. For example, Tien-Chieh Hung had no problem collecting a 100 smelt in one day for his smelt culture program,” he noted.

“What is interesting is that the indices for striped bass and American shad show a fairly strong positive response to the wet winter,” Moyle stated. “Both have planktivorous larvae/juveniles that are estuarine-dependent, carried there by higher flows. They are better indictors of a functioning estuary than are smelt these days.  Note that indices for splittail and threadfin shad are meaningless because the FWT is not a good way sample them.”

A number of factors have resulted in the decline of Delta smelt and the other pelagic species, including increases in toxics and invasive species, but no factor has helped precipitate the collapse of Delta fish species more than the export of big quantities of water to agribusiness and Southern California water agencies from the state and federal pumping facilities in the South Delta over the past 50 years.

The Delta smelt (Hypomesus transpacificus) is an endangered smelt, about 2.0 to 2.8 inches long, in the Osmeridae family. Once the most abundant fish found in the estuary that numbered in the millions, the fish has declined dramatically in recent years.

Found only in the Sacramento-San Joaquin River Delta, the smelt mainly inhabits the freshwater-saltwater mixing zone of the estuary, except during its spawning season. That's when it migrates upstream to freshwater following winter "first flush" flow events, around March to May.

The smelt is very susceptible to changes in the environmental conditions of its habitat due to its one-year lifecycle and relatively low fecundity. Because of this, the fish is an “indicator species” that demonstrates the health of the Delta ecosystem. Government efforts to protect the endangered species from moving closer to extinction have focused on limiting or modifying the pumping activities of state and federal water projects in the South Delta, as well as the creation of a captive breeding facility.

However, these limited efforts have not been aggressive enough to prevent the species from nearing extinction in the wild. To make things worse, the Trump administration on December 29 formally announced its intention to "maximize water deliveries" for Central Valley Project contractors and "augment operational flexibility by addressing the status of listed species,” including Delta and longfin smelt, spring and winter-run Chinook salmon, Central Valley steelhead and other fish species.

The Bureau of Reclamation, under the helm of Reclamation Commissioner Brenda Burman, said in the Federal Register that it intends to prepare a programmatic environmental impact statement (EIS) for “analyzing potential modifications to the continued long-term operation of the federal CentralValley Project (CVP), for its authorized purposes, in a coordinated manner with the State Water Project (SWP), for its authorized purposes.”

“Reclamation proposes to evaluate alternatives that maximize water deliveries and optimize marketable power generation consistent with applicable laws, contractual obligations, and agreements; and to augment operational flexibility by addressing the status of listed species. Reclamation is seeking suggestions and information on the alternatives and topics to be addressed and any other important issues related to the proposed action,” according to Reclamation.

Written comments on the scope of the EIS must be submitted by February 1, 2018. To read the Federal Register, go to: https://www.gpo.gov/fdsys/pkg/FR-2017-12-29/pdf/2017-28215.pdf
Add Your Comments
Support Independent Media
We are 100% volunteer and depend on your participation to sustain our efforts!