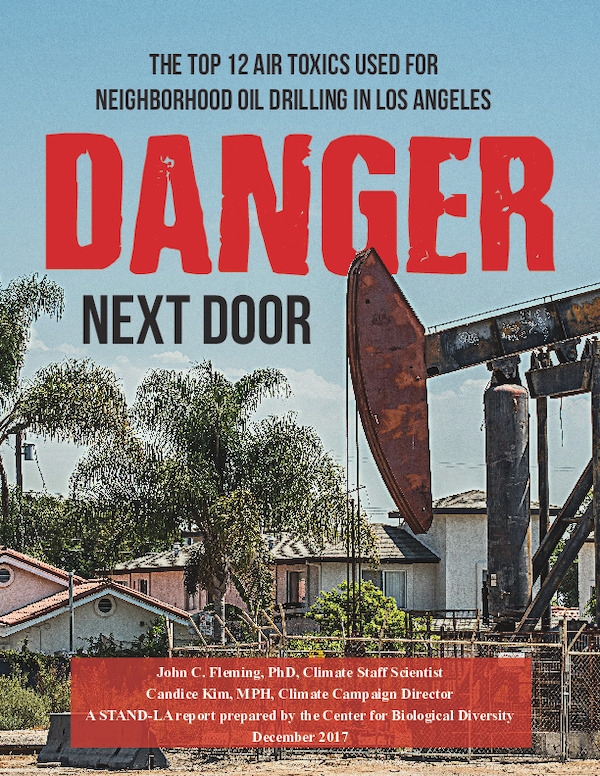 That is the narrative promulgated by state officials, public relations experts and writers who gush about the Governor’s frequent speeches at international climate conferences. The reality on the ground here in California is much, much different.

In fact, California is the third biggest oil producing state in the country and Big Oil is the largest corporate lobby, dominating the Governor’s Office, the Legislature and the regulatory agencies.

Even worse, a report released on December 13 by the Stand Together Against Neighborhood Drilling Los Angeles (STAND-L.A.) coalition revealed that oil companies in the nation’s so-called “greenest state” have used more than 98 million pounds — or 49,000 tons - of chemicals known to cause serious health problems in Los Angeles County since 2013.

These “air toxics” were often used “dangerously close” to homes, hospitals and preschools, the report said. In addition, “more than 21 million pounds — or 10,500 tons— were used in the city of Los Angeles alone.”

“The known air toxics most frequently used by oil companies in the Los Angeles air basin include crystallinesilica, methanol, hydro uoric acid, and formaldehyde,” according to the report. “These chemicals pose serious health concerns. Formaldehyde, for example, harms the eyes and respiratory system and is classified as a cancer-causing substance by the International Agency for Research on Cancer and the California Air Resources Board.”

“The analysis revealed that over 80 percent of air toxics uses involved just 12 chemicals, including carcinogens like crystalline silica and formaldehyde. Hydrochloric acid, one of the most frequently used air toxics, is a corrosive gas that can cause suffocation or irreversible lung damage at high concentrations,” the report stated.

“The oil industry’s massive use of air toxic chemicals threatens the lungs and lives of thousands of people in Los Angeles,” said Fleming. “With risks ranging from respiratory irritation to cancer, it would be irresponsible for state and local regulators to allow drilling to continue in our densely populated neighborhoods.”

As of 2013, the air district requires well operators to disclose chemicals used in “unconventional oil and gas recovery activities,” including well-stimulation techniques like acidizing and hydraulic fracturing (“fracking”), according to Fleming.

However, because oil companies used “trade secret” protection in 21 percent of their reports, more air toxics could have been used than were disclosed, said Fleming.

“The data reported to the Air District, while incomplete in many ways, shows extensive and widespread use of harmful chemicals by oil companies in the Los Angeles air basin. The pervasive and persistent use of these chemicals threatens to contaminate local air quality and put public health and safety at risk. State and local governments must take stronger action to protect our communities from these dangerous oil industry chemicals.”

Martha Argüello, chair of STAND-L.A. and executive director of Physicians for Social Responsibility – Los Angeles, commented, “It’s unconscionable that oil companies are using highly toxic chemicals in L.A. neighborhoods, often just yards away from homes, schools and hospitals. And it’s inexcusable that oil companies continue to hide behind inadequate reporting and trade secrecy claims to keep the full scope of this danger from the public.”

The oil industry has captured the regulatory apparatus in California from the Governor’s Office, to the Legislature, to the state agencies. Because of the gusher of oil lobbying money, no bill opposed by the oil industry with the exception of one has been able to make it out of the Legislature over the past three years.

The California Oil Lobby was the biggest spender in the 2015-16 legislative session, spending an amazing $36.1 million on lobbying over the two-year period, according to an American Lung Association in California report.

Big Oil spending last session amounted to $1.5 million per month — nearly $50,000 per day. The $36.1 million surpassed the $34 million spent in the prior legislative session.

WSPA was the top overall oil industry spender during the 2015-16 session, spending $18.7 million. As is normally the case, WSPA ranked #1 among all lobbying spenders last session. To read the report, go here: http://www.lung.org/…

Based on the oil industry lobbying over the past two quarters of 2017, it looks like the industry could set a new spending record this session. The oil industry spent more on lobbying in California, $16,360,618, in the first six months of 2017 than was spent by the industry in all of 2016, $16.0 million.

This translates to an average of $2.7 million per month – $90,000 per day – since Jan. 1, 2017, according to a new report compiled and written by William Barrett of the Lung Association in California. Since the 2007-08 Session, the oil industry has spent over $150 million in lobbying in California when you include the figures for the first two quarters of 2017.

Not only do WSPA , Chevron and Big Oil dominate California politics by spending millions on lobbying every year, but they also exert their money and power through campaign spending, creating Astroturf groups, working in collaboration with media and getting appointed to positions on and influencing regulatory panels.

For more information, go to http://www.dailykos.com/…