Add an Event
Newswire
Calendar
Features
Home
Donate
From the Open-Publishing Calendar
From the Open-Publishing Newswire
Indybay Feature
Publish to Newswire
Add an Event
Related Categories: California | Central Valley | Environment & Forest Defense | Government & Elections | Health, Housing & Public Services
New Reports Expose Racial and Economic Injustice, Ineffectiveness of Pollution Trading
by Dan Bacher
Tuesday Nov 14th, 2017 1:54 PM
Wenonah Hauter, executive director of Food & Water Watch, said, “Pollution trading schemes like cap-and-trade unjustly burden lower-income communities of color. This is a fact. So many of us are rightfully desperate for solutions to our climate crisis, but market-based policies won’t save us. The only real way to significantly reduce carbon pollution is to stop producing it. We must move off fossil fuels now.”

Photo: Governor Jerry Brown speaks at the COP 23 in Bonn, Germany on November 11, the day his speech was disrupted by indigenous protesters. Photo courtesy of Governor's Office. 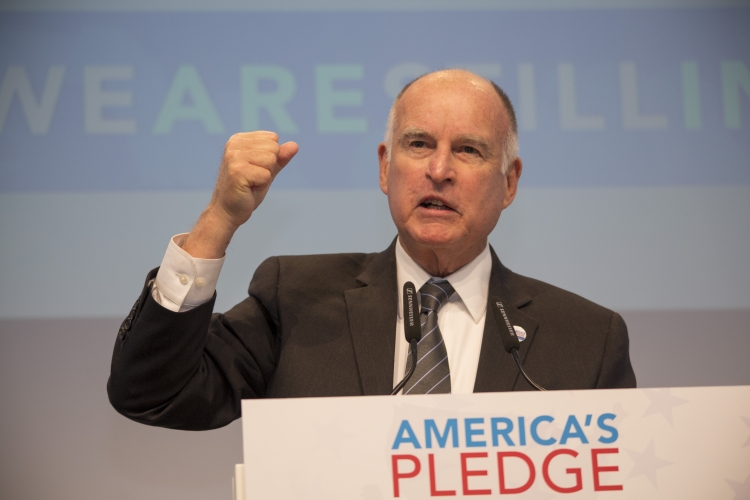 original image (5760x3840)
Two days after protesters from indigenous and front line communities challenged Governor Jerry Brown to leave oil and gas “in the ground” as he spoke during his European “climate tour,”  non-profit organizations released two new studies criticizing the racial and economic injustice behind and the ineffectiveness of cap-and-trade programs.

Governor Brown urged European leaders to adopt similar cap-and-trade policies as those developed in California during the UN Framework Convention on Climate Change’s 23rd Conference of the Parties (COP23) last week. However, a report released Monday reveals the environment injustice of what cap-and-trade opponents call “pollution trading,” showing that it is not a real solution to climate change.

The report, published by the advocacy organizations Food & Water Watch and Greenaction for Health and Environmental Justice, details the disproportionate burdens of air and water contamination and serious human health effects placed on low-income communities of color by market-based pollution trading schemes like the one authorized by Brown’s cap-and-trade bill, AB 398.

Paying to Pollute – The Environmental Injustice of Pollution Trading shows that under many of these plans, including California’s  cap-and-trade program, “localized pollution and public health impacts actually increase in low-income communities of color,” according to a joint statement from the two groups. You can read the full report here: https://www.foodandwaterwatch.org/sites/default/files/payingtopollute-web.pdf

The California Legislature extended California’s cap-and-trade program through 2030 when they approved Brown’s AB 398 this summer. Over 65 environmental justice, indigenous, conservation, and consumer groups opposed the legislation, though some “Big Green” NGOs, eager to make a deal with Big Oil and other corporate interests, backed AB 398.

The bill ignited a storm of controversy when it was revealed that the legislation was based on a Big Oil wish list — and developed behind closed doors between Brown administration representatives and Western States Petroleum Association and Chevron lobbyists.

Big Oil and other corporate polluters have traditionally located facilities in low-income communities of color like Richmond, California and the San Joaquin Valley, resulting in a disproportionate, localized environmental and public health burden. The new report “illustrates how market-based programs further concentrate polluting emissions in low-income areas, while also often failing to reduce overall emissions under the programs at large.”

The report states, “Free market environmental policies are fundamentally changing America’s approach topollution control. Market-based pollution credit schemes are undermining successful environmental laws like the Clean Air Act and the Clean Water Act by allowing industries to pay for the right to dump contaminants into our waterways and air. The health and environment of communities surrounding these pollution sources pay the price for these free market environmental policies. All too often, these are lower-income neighborhoodsand communities of color.”

Wenonah Hauter, executive director of Food & Water Watch, said, “Pollution trading schemes like cap-and-trade unjustly burden lower-income communities of color. This is a fact. So many of us are rightfully desperate for solutions to our climate crisis, but market-based policies won’t save us. The only real way to significantly reduce carbon pollution is to stop producing it. We must move off fossil fuels now.”

"Low income and communities of color have a right to clean air and a healthy environment," added Bradley Angel, executive director of Greenaction for Health and Environmental Justice." Fossil fuels need to be kept in the ground, not traded to help giant corporate polluters make money off of the health of our communities and our planet."

Congresswoman Barbara Lee (D-CA) also commented on the release of the new report.

“As a member of the Appropriations and Budget Committees, I’m fighting to ensure that our government understands the reality of climate change and takes action to address it,” said Lee. “We must face the facts: the pollution that damages our environment has a direct impact on our public health.”

“And too often, communities of color have been forced to live in the most polluted, contaminated areas, causing asthma and severe illnesses among children, the elderly and our most vulnerable,” said  “It’s time for us all to demand environmental justice and ensure that every community is protected from the devastating impacts of pollution and climate change. It is a moral imperative for Congress to take immediate action to end our reliance on fossil fuels,” Lee concluded.

On the same day, a new scientific report unveiled by the Santa Monica-based Consumer Watchdog reveals that Governor Jerry Brown’s greenhouse gas trading program to cut emissions “is a bust so far, thanks to oil industry efforts to keep it that way.”

The nonprofit think tank Near Zero finds that California’s cap-and-trade system has not cut emissions in California. Instead, changes in the mix of sources generating electricity did the trick to cut emissions by nearly 5 percent in 2016.

For the Near Zero analysis, see:
http://www.nearzero.org/wp/2017/11/10/californias-climate-emissions-are-falling-but-cap-and-trade-is-not-the-cause/

“Near Zero’s research shows that Governor Brown has to get serious about leaving gas and oil in the ground if he really wants to meet 2030 targets for slashing emissions by 40 percent below 1990 levels,” said Consumer Advocate Liza Tucker in a statement. “Rather than doing a victory lap around Europe right now, he should be pushing policies with real bite in slashing emissions, rather than letting the industry write the regulations on cap-and-trade for him.”

“While Governor Brown pushes market-based solutions in Europe that clearly aren’t working at home, the results back home show those solutions aren’t working because the approach is too lax,” said Tucker. “When California extended its cap-and-trade program this year through 2030, Governor Brown allowed the oil and gas industry to write the rules maintaining features like an overabundance of permits and other loopholes to ensure that the program just won’t have teeth.

“The oil and gas sector finds it cheaper to pay to pollute than to install equipment to prevent emissions. That kind of system will not help avoid disastrous levels of global warming because the power sector simply can’t deliver all that will be needed. But the cap-and-trade legislation may have been a thank you to the energy industry from Brown, who benefitted from nearly $10 million in donations to his campaigns, causes, ballot measures, and to his party since his election in 2011,” she concluded.

For more on California’s system of cap-and-trade, see: http://capitolwatchdog.org/article/jerry-browns-cap-and-trade-bill-would-exempt-refineries-air-pollution-regulation

The California Oil Lobby was the biggest spender in the 2015-16 legislative session, spending an amazing $36.1 million on lobbying over the two-year period. Based on the oil industry lobbying over the past two quarters, it looks like the industry may set a new spending record this session.

Big Oil spending last session amounted to $1.5 million per month — nearly $50,000 per day. The $36.1 million surpassed the $34 million spent in the prior session, according to an American Lung Association report. To read the complete report, go to: http://www.lung.org/local-content/california/documents/Oil-Industry-Lobbying-2016-update-4_1-31-17.pdf

WSPA was the top overall oil industry spender during the 2015-16 session, spending $18.7 million. As is normally the case, WSPA ranked #1 among all lobbying spenders last session. In the seventh quarter alone, WSPA dumped $2.6 million into lobbying legislators and state officials.

Chevron, the second overall oil industry spender, spent $7 million in the 2015-16 session. It spent $3 million in 2016 alone, sixth among all lobbyists in the session.

The only bill opposed by the oil industry that made it out of the legislature to be signed by Governor Jerry Brown was Senate Bill 32, legislation that reduces greenhouse gas level to 40 percent below 1990 levels by 2030. The reason for the bill’s passage was because billionaire Tom Steyer’s Next Generation Climate Action spent  $7.3 million lobbying for the bill in the seventh quarter of the session.

Since the 2007-08 Session, the oil industry has spent over $146 million in lobbying in California when you include the figures for the first two quarters of 2017.

WSPA and Big Oil use their money and power in 5 ways: through (1) lobbying; (2) campaign spending; (3) creating Astroturf groups: 4) working in collaboration with media; and (5) getting appointed to positions on and influencing regulatory panels.

In an enormous conflict of interest, Catherine Reheis-Boyd, the President of the Western States Petroleum Association, chaired the Marine Life Protection Act (MLPA) Initiative Blue Ribbon Task Force to create so-called “marine protected areas” in Southern California from 2009 to 2012. She also served on the task forces to create “marine protected areas” on the Central Coast, North Central Coast and North Coast from 2004 to 2012.

The “marine protected areas” created under her leadership fail to protect the ocean from fracking, offshore drilling, pollution, military testing and all human impacts on the ocean other than sustainable fishing and gathering.
Add Your Comments
Support Independent Media
We are 100% volunteer and depend on your participation to sustain our efforts!