Add an Event
Newswire
Calendar
Features
Home
Donate
From the Open-Publishing Calendar
From the Open-Publishing Newswire
Indybay Feature
Publish to Newswire
Add an Event
Related Categories: California | Central Valley | Environment & Forest Defense | Government & Elections | Health, Housing & Public Services
The environmental injustice and dirty oil behind California's 'green’ facade
by Dan Bacher
Thursday Nov 9th, 2017 4:41 PM
Governor Jerry Brown may be pulling “people together” and getting people to “wake up,” but not in the way that he intended, as increasing numbers of Californians mobilize against the Governor’s steadfast support of fracking and drilling dirty oil, a Big Oil-written cap-and-trade program and permits to pollute groundwater with oil wastewater in Kern County, as well as his environmentally unjust Delta Tunnels project. 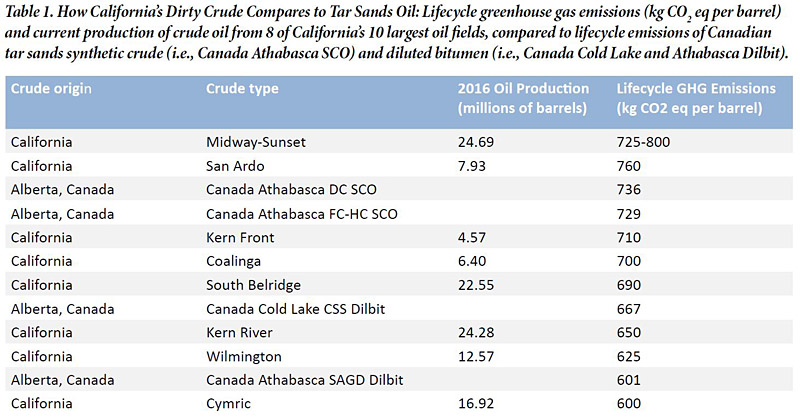 “The Democratic governor and leader of the world’s sixth-largest economy pitched the prospect of a formalized California-Europe pact as a ‘concrete investment’ that could compel more states and international provinces to tackle the climate challenge at a global level,” the Sacramento Bee reported: http://www.sacbee.com/news/politics-government/capitol-alert/article183176306.html

However, not mentioned in most of the largely fawning media reports of Brown’s whirlwind European climate tour is that the legislation extending California’s cap-and-trade program for another 10 years, AB 398, is based on a Western States Petroleum Association (WSPA) and Chevron “wish list.” Over 65 environmental justice, conservation and consumer organizations opposed the bill for the unjust impact it would have on frontline communities and communities of color, including farmworkers in the San Joaquin Valley.

Adam Scow, the California Director of Food and Water Watch, said Brown’s proposal to link California’s cap-and-trade program with the European Union emissions trading system and other carbon markets is “foolish and wrongheaded.”

“Food & Water Watch strongly opposes Governor Brown’s proposal to link California’s cap-and-trade program with other carbon markets, which would allow oil and gas companies to buy and swap credits on international markets while their fossil fuel extraction continues,” said Scow. “Governor Brown’s cap-and-trade program was written in consultation with the oil industry and allows the industry to pay to keep polluting.”

Scow said the European Union Emissions Trading System that was started in 2005 has been “a failure at reducing emissions.”

“Between 2005 and 2011 the EU ETS resulted in $20 billion in carbon fraud and that the program hasn’t achieved decreased carbon emissions reductions. By all measures, the EU ETS has been an abject failure,” Scow stated.

“At a time when the impacts of climate change are becoming more severe, we must remember that the world’s leading climate scientists have warned that nations must stop using fossil fuels and replace them with renewable energy sources. Instead of promoting dangerously inadequate policies like cap-and-trade, Californians and the world need Governor Brown to take real actions to ban fracking and phase out the use of fossil fuels in California,” said Scow.

Report: Three-quarters of CA oil is as dirty as Canadian tars sands crude

The analysis comes as Brown, amidst gushing media coverage, prepares to address the U.N. conference. Brown arrives at the conference on Nov. 11 as part of his “climate tour” to link California’s environmentally unjust California carbon trading system with cap-and-trade programs in Europe and elsewhere.

“California is tarnishing its climate leadership by encouraging oil companies to extract millions of barrels a year of some of the planet’s dirtiest crude,” said report author Shaye Wolf, the Center’s climate science director. “Our state’s huge reserve of dirty crude is a loaded gun pointed at our future. We can’t let the oil industry pull the trigger.”

The Center’s analysis, using lifecycle emissions estimates and state oil field data, found that three-quarters of oil produced in California is, barrel for barrel, as carbon-intensive as Canada’s tar sands crude. Nearly two-thirds of remaining reserves in 18 of the largest oilfields in the San Joaquin and Los Angeles Basins is similarly climate-damaging, totaling 6.1 billion barrels of particularly polluting crude, according to Wolf.

Wolf said increasing use of “extreme-extraction” techniques like steam flooding and fracking has worsened the climate harms of the state’s oil production.

He noted that many of the oilfields evaluated in the report operate next to homes and schools, releasing toxic air pollutants that cause cancer, asthma and other health problems. Oil drilling occurs disproportionally in communities of color who already suffer from some of the worst air quality in the nation.

“Gov. Brown needs to stop pandering to the oil industry. Oil-friendly policies are fueling climate change, endangering Californians and stifling our transition to clean energy. To be a true climate leader, California must phase out oil production within its borders,” Wolf concluded.

In his remarks before the Baden-Wurttemberg State Parliament and nearly three hours of debate and dialogue with members of the European Parliament in Brussels, Belgium, Wednesday, Governor Brown “forged closer ties” with European leaders committed to climate action and blasted the "denialists" who continue to reject the scientific consensus on global warming, according to a news release from the Governor’s Office.

"We have to wake up – wake up Europe, wake up America, wake up the whole world to realize we have a common destiny and we are all human beings on this one planet," said Governor Brown in his address to the state parliament of Baden-Wurttemberg, co-founder of the Under2 Coalition. "This is daunting but it's also an opportunity to pull people together."

Governor Brown may be pulling “people together” and getting people to “wake up,” but not in the way that he intended, as increasing numbers of Californians mobilize against the Governor’s steadfast support of fracking and drilling dirty oil, a Big Oil-written cap-and-trade program and permits to pollute groundwater with oil wastewater in Kern County, as well as his environmentally unjust Delta Tunnels project.

“California Governor Jerry Brown is one of the biggest liars when it comes to being a ‘climate leader,’” summed up Isabelle Zizi of Idle No More SF Bay. “In 2014, hundreds of our drinking water and agricultural aquifers were contaminated with 3 billion gallons of fracking wastewater. The cap and trade bill that he passed in the summer of 2017 is in favor of more greenhouse gas emissions, more offsets for the fossil fuel industry, and is a false solution to stop climate change.”

Zizi is in Bonn for the UN Climate Talks. Follow her for updates on actions from the #ItTakesRoots delegation of Indigenous people, frontline communities and people of color!. #COP23 #WeStandTogether

As the media portrays Brown and other state officials going to the COP23 as “climate leaders,” Big Oil continues to dump millions of dollars into lobbying and campaign contributions every year. In the 2015-2016 Legislative Session alone, the oil industry spent over $36.1 million lobbying in California. This massive spending spree has continued into 2017.

Chevron dished out the second largest amount of any organization, with $1.1 million spent last quarter.

Big Oil also spent over $10.8 million in lobbying in the second quarter of 2017 to pass AB 398, Governor Brown’s cap-and-trade bill, through the legislature, as well as to lobby against SB 188, legislation to stop new offshore oil drilling off the California.

The San Ramon-based Chevron and subsidiaries topped all other lobbyists in the state in the second quarter with $6,153,952 spent, followed by WSPA with $2,528,751 and the San Antonio-based Tesoro Refining and Marketing Co. LLC with $2,193.489.

“Contamination of our communities needs to stop now,” said Candelaria Vargas of Daily Kos in an action alert. “The oil industry has poured millions of dollars into California politics and has seen results. A statewide scientific study was conducted on the toxicity of fracking near water sources and why this practice should be stopped, but has not had adequate response from our lawmakers. More needs to be done to protect our environment and our public health.”

Please sign this petition to get oil money out of California Politics: https://www.signherenow.org/petition/oil-money-out/dailykos/
Add Your Comments
Support Independent Media
We are 100% volunteer and depend on your participation to sustain our efforts!