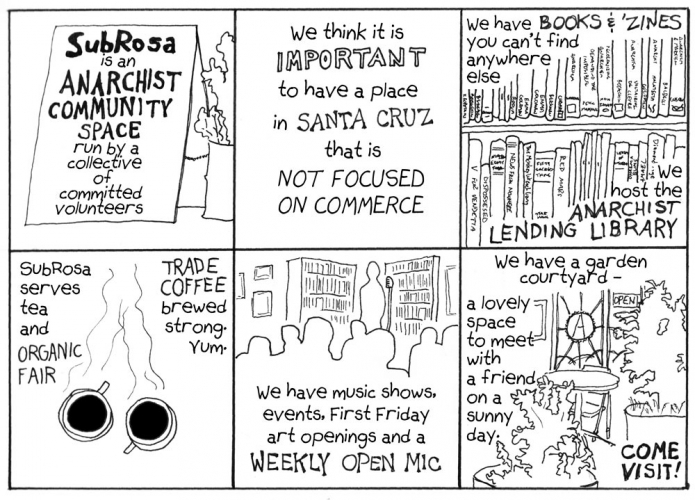 original image (1000x719)
September and October 2008 we worked on the inside and courtyard at a space at 703 Pacific Avenue in downtown Santa Cruz that was soon to be named SubRosa. Lots of folks and lots of hours. On Halloween we were still working on the inside, painting. People would drift in and out in costume to help until late into the night.

The next evening, November 1st, was our opening with an art show and music! It poured rain that night and the courtyard flooded. We called the outside area the info-swamp and set down blocks of cement as stepping stone islands. Inside the space was packed and humid. The paint started dripping down the walls and quite a few people went home wearing the paint on their clothes as they unwittingly leaned against the wet walls ... hopefully a nice reminder of a great opening night.

And now nine years later we are still going ... doing-it-together. Come to SubRosa and check out what is going on. Go to our website for more information on events at SubRosa. The space is what we make of it, and this includes you as well. There are many ways to contribute to SubRosa. Get involved with the space ... join the collective ... host an event ... show your art ... and so on. Another world is possible. We can create it now, and at the same time counter the coercive and destructive impact of the over-culture. A question we often ask ourselves is, how can SubRosa be relevant to those endeavors? Let's figure that out together and do it (especially in these times).

Much appreciation to all those who have contributed to SubRosa over the past 9 years...so many people in so many different ways. And may we continue to thrive for years to come.

Music poured out into the rainy night, as people cramped tightly together to share in the musical performances at the grand opening of SubRosa. The small, but cozy space was filled with a vibrant youthful crowd. Event goers snacked on piles of free bread, and coffee from reusable ceramic mugs. Artwork from local artists covered the freshly painted walls, as well as a colorful display of ‘zines, and a lending library. The set had almost everyone jumping and singing along. The space will be a home to future performances, open mics, and Free Skool workshops. Stop in for a steaming cup of coffee and check out the extensive library.

SubRosa: A Community Space is a non-profit, donation-funded space for art and radical projects run by a collective of volunteers from the Santa Cruz anarchist community.

Some Santa Cruz radical history ... SubRosa is part of a lineage, in some cases direct and in other ways indirect. Here are some of those radical ancestor projects and spaces. Written from my perspective. -j!

- In early 2000s there was a radical/anarchist community space/infoshop located on Walnut Avenue that shared space with Bike Church and The Hub called the Rhizome. It had a library and meeting space. I went there for Free Radio Santa Cruz meetings and other groups [including Santa Cruz Indymedia] had meetings there too. Some groups had desks and work spaces there. It ended in part due to complaints from upstairs neighbors (things came to a head after a particularly raucous show there) and money was also a stress. Santa Cruz radicals and anarchists went to Seattle in the late 1990s and this was inspirational for folks. I was not intimately involved with this project so I can’t comment on it much. In the same building was The Hub at which an anarchist discussion group met (this was after the Rhizome closed). There was also a dumpster collective that used the fridge in the backroom of the Hub. So much food abounded and was shared!

- What Is Art? was a radical performance and art space located at the other end of Pacific Avenue past the Town Clock. Not explicitly anarchist, it was run as a collective and was around in the late-ish 1990s. I was also involved with this space, as was another initial member of the SubRosa collective core:
http://www.santacruzart.net/2007/04/now-what-what-is-art-collective-is.html

- After the above infoshop closed the @narchist library moved to the Sacred Grove and I tended it for some years. This was meant to be temporary as we thought we would find another space but that didn’t happen. Sacred Grove folks were very supportive and even gave me a key to the space:
http://santacruz.indymedia.org/newswire/display/11122/index.php

And of course much more could be (and will be) written...
http://www.subrosaproject.org/
§Name Suggestions 4 Infoshop
by SubRosa Tuesday Nov 7th, 2017 11:13 AM 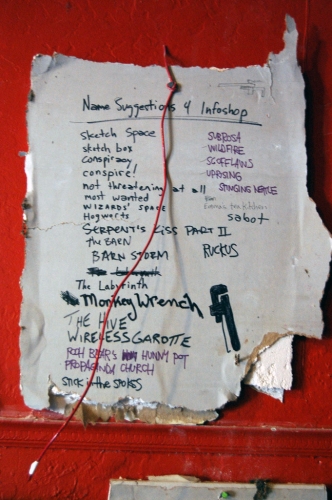 original image (681x1024)
Back in September 2008 we were working hard to transform a vacant and dusty retail shop into a vibrant anarchist social space and parking lot into a lush garden. Almost as difficult was coming up with a suitable name that everyone liked. So a piece of drywall was nailed up, and a pen was hung from the nail. Anyone who came by to help could add a name. As you can read, names ran the spectrum from inspired to silly.

The word subrosa was lifted from Emma Goldman's Living My Life where she wrote repeatedly about subrosa plans and endeavors. Subrosa, that has a nice poetic ring to it. Add the name to the list after Sitck in the Spokes (which was a playful poke at our neighbors the Bike Church, another wonderful project). Research into the origins of the word revealed that at times in distant past people would place a rose above them and then make a pledge of secrecy and confidentiality to each other. I also interpreted this as meaning they would be in support of each other in a world that is full of adversities. We chose to spell the word SubRosa.

On the rainy night of the space's opening November 1st 2008 (another story in itself) one person came to the celebration with a rose that was hung from the wooden beams overhead.

At SubRosa we strive to have each others's backs, in support for each other and in opposition to the state-capital-status-quo. That can take many forms at SubRosa. It is a space that is run by a collective according to anarchist principals. There is no boss, and we make decisions together by consensus. SubRosa is a space where one is welcome whether or not a person has a roll of bills or a ball of lint in their pocket. People can meet informally (hanging out inside or the courtyard) or formally (via Free Skool classes or events) and share with each one another other ways of relating. There is a plethora of radical reading material available, offerings from the anarchist library to the Meristem Health Distro to other radical zines and books. Ultimately, SubRosa is what we make of it, and in that spirit there is a multitude of possibilities to be realized. 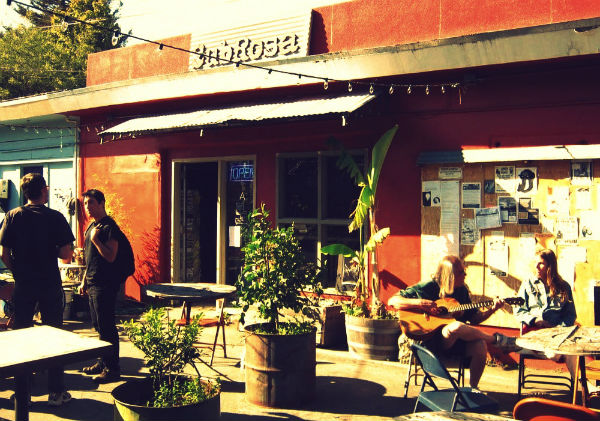 Alice Ruiz
https://noticiasanarquistas.noblogs.org/po...
Add Your Comments
LATEST COMMENTS ABOUT THIS ARTICLE
Listed below are the latest comments about this post.
These comments are submitted anonymously by website visitors.