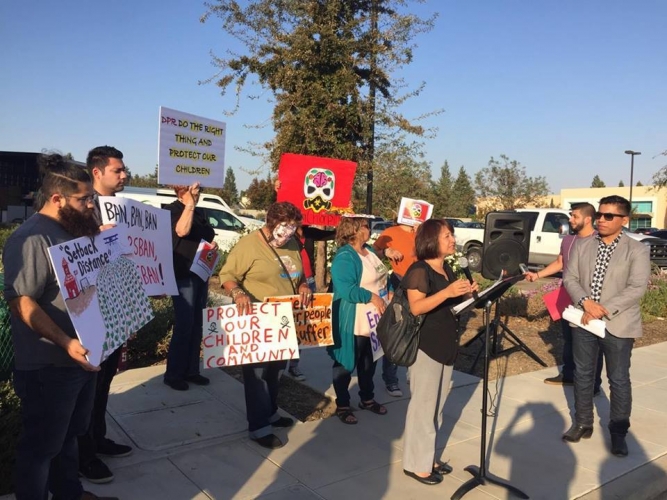 Clovis, CA – Health advocates from Fresno, Tulare, and Kern Counties called on the Central Regional Office (CRO) of the Department of Pesticide Regulation (DPR) to urge the State to suspend agricultural use of brain-harming chlorpyrifos. The November 1st press conference, led by members of Tulare County Coalition Advocating for Pesticide Safety (CAPS), and in joint partnership with Central California Environmental Justice Network (CCEJN), was held outside DPR’s Central Regional Office. The press conference was prefaced with Day of the Dead-themed actions, and followed by a delivery of a letter to the Regional Office (CRO) supervisor urging suspension of the brain-harming chemical. The letter was endorsed by 18 regional environmental justice groups and Erin Brockovich.

“We are disappointed with DPR’s approach on chlorpyrifos by asking for more studies and thus leaving Californians susceptible to the continued threat of long-term harm,” said Fidelia Morales, outreach coordinator for Coalition Advocating for Pesticide Safety (CAPS). “DPR needs to stop ignoring US EPA science—they need to start thinking about community health first.”

The letter delivery is yet another demonstration of community disagreement and disappointment with DPR’s inadequate action by not banning chlorpyrifos despite the more than twenty years of science linking the pesticide to neurological disorders in children, particularly those living in areas of high chlorpyrifos use.

“The legacy of continued drift incidents in farmworking communities shows where the priorities are,” said Nayamin Martinez, Executive Director of Central California Environmental Justice Network. “Our communities continue being exposed but no real change, no real health protections are being implemented.”

Kern County (county with the highest use of chloryprifos) has seen obvious consequences of the brain- harming chlorpyrifos. Back in May, the pesticide was implicated in the drift incident that sickened dozens of Bakersfield farmworkers. Also important, the US EPA found chlorpyrifos concentrations at the Shafter pesticide air monitor at 44 times the federal health risk level, and there are no fields within 500 feet of the monitor.

The press conference also comes on the heels of DPR’s October 3rd release of its “Chlorpyrifos Interim Recommended Permit Conditions” that the department said would protect “bystanders” from the harmful effects of chlopyrifos. Yet, community members strongly feel that these interim mitigations are no where near adequate for “bystander” protection as alleged by DPR back on September 15th at the Pesticide Registration and Evaluation Committee in Sacramento.

“Impacted communities need to be heard and prioritized. Communities in the frontline of exposure must not remain unprotected, unheard, and wait for more studies to be protected,” said Sandra Garcia, president of Campesinas Unidas del Valle de San Joaquin. “We have children and we want the best protections for them. Corresponding authorities must take action, if not for us, then for the children.”

November 1st also marked the second day of Dia de Los Muertos (Day of the Dead), a three-day Mexican celebration that holds the belief that during this time the deceased are permitted to once again indulge in the pleasures of this world—it is a joyous time, a unique way of celebrating life. For this reason, the press conference held an additional meaning: the importance of life.

Central California Environmental Justice is an organization led by local diverse people and working with other networks globally to end environmental racism and achieve economic justice through sustainable regional solutions.

Californians for Pesticide Reform is a diverse, statewide coalition of over 190 member groups working to strengthen pesticide policies in California to protect public health and the environment. Member groups include public and children's health advocates, clean air and water groups, health practitioners, environmental justice groups, labor, education, farmers and sustainable agriculture advocates from across the state.

http://www.pesticidereform.org
Add Your Comments
LATEST COMMENTS ABOUT THIS ARTICLE
Listed below are the latest comments about this post.
These comments are submitted anonymously by website visitors.