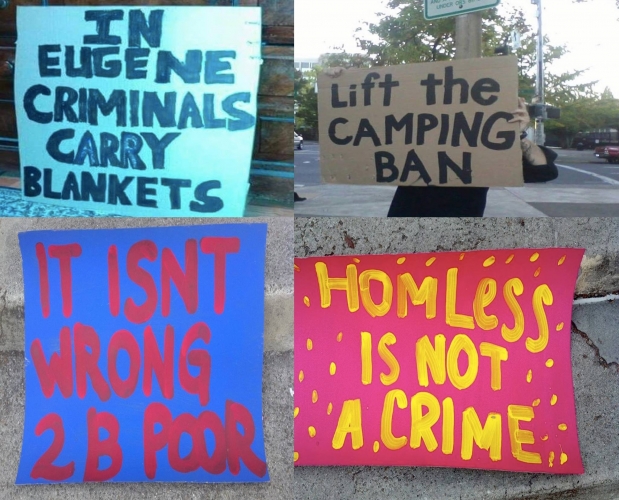 original image (2048x1653)
As advocates for people experiencing homelessness in Santa Cruz continue to work directly to address the criminalization of houselessness and call for the repeal of the city’s camping/sleeping ban, they have also been consistent in their position that ordinances prohibiting and criminalizing lying, sitting, and sleeping in public criminalize the houseless on the basis of status and pose a grave danger of being selectively enforced. And although some see a ray of hope in the policies being enacted by new police chief Andy Mills, the reasoning of Bell v. Boise continues to cast its shadow upon a community that has failed to provide adequate shelter for its houseless residents. But first, a short summary of recent developments.

As we know, in May of this year the Santa Cruz City Manager unilaterally reduced not only the hours of access to these traditional public spaces, but also has taken the extraordinary step of strictly limiting any activities in and around City Hall and the Central Library grounds. Hours of park access were reduced from 6:00 a.m. to 10:00 p.m. every day to 7:00 a.m. to 6:00 p.m., with no access permitted at all on Saturday and Sunday. Even during those hours, sitting or gathering at City Hall has been virtually prohibited. These new restrictions where nothing less than an old-fashioned “turf war” with the houseless desperately trying to hold onto one of the last public gathering spots available to them. One longtime civil liberties advocate remarked, “Among the rights our federal constitution was intended to protect is the right to access and use of open and public spaces and our City Hall is but one example. Historically, many areas within our city have been recognized as public spaces and among the most historic and notable is our City Hall and its surrounding grounds. The new restrictions are not reasonable as to place, time and manner and are, rather, extreme and unreasonable under the totality of the circumstances. The limitation of access to the area around and including City Hall, and by extension the grounds of the adjacent Central Library, raises serious questions of abridgement of substantive civil liberties.” Local advocates for the houseless community reached out to the National Law Center on Homelessness and Poverty (NLCHP) for legal aid in a potential civil lawsuit charging the City Manager with exceeding his executive authority and violation of the constitutionally guaranteed rights to free speech and assembly but that potential litigation was put on hold in light of more recent and much more pressing concerns shaped by the newly revised “stay away” ordinance.

This municipal ordinance, which in its inception was a thinly veiled attempt to drive houseless people out of public spaces, was recently made even more onerous by adding new “enhancements” and trebled penalties. In response, the ACLU of Santa Cruz County transmitted this statement to council. “The Santa Cruz Chapter of the ACLU of Northern California opposes this measure on several grounds. Most important, there is a complete lack of due process. Rangers issue the stay-away orders without any review or even input from a judicial officer. That is equivalent to a police officer convicting someone of a crime, rather than simply issuing a ticket or a citation, which initiates a system where a prosecutor must prove to a judge or jury, beyond a reasonable doubt, that the defendant is guilty. The appeal process does not solve the problem, because (1) the presumption of innocence and the state's burden to prove guilt are both lacking, and (2) the person hearing an appeal is not a judicial officer, but an untrained and not-disinterested city official. We strongly urge the Council to reject this measure, and to reconsider the existing ordinance on the same grounds.” The local ACLU has now formally requested legal assistance from the Northern California affiliate and is awaiting a response.

Ironically, the City Hall/Library restrictions mentioned above prompted members of the houseless community to set up an encampment at the Downtown Post Office which until a few days ago was a thriving place of safety and respite. Sadly, that too has been swept away spawning another migration to the San Lorenzo Park Bench Lands where a large and growing community is developing. Local activists have heard, but have not been able to verify, that the downtown houseless have been directed to the bench lands and that they are sleeping undisturbed and are not being ticketed. How long this encampment will last in problematic, but does serve to highlight the fact that we continue to have inadequate shelter for the number of unsheltered people in our community in contravention of the legal position taken by the federal Department of Justice in the case of Bell v. Boise.

As many know, in March of last year, a Statement of Interest submitted by the U.S. Department of Justice (DOJ) in the U. S. District Court case of Janet F. Bell, et. al v. City of Boise, et. al reflected a dramatic shift in federal policy away from criminalizing homelessness. The statement articulated a legal framework that went to the heart of homelessness. Writing for the DOJ, Civil Rights Division Attorney Sharon Brett noted, “When adequate shelter space exists, individuals have a choice about whether or not to sleep in public. However, when adequate shelter space does not exist, there is no meaningful distinction between the status of being homeless and the conduct of sleeping in public. Sleeping is a life-sustaining activity i.e., it must occur at some time in some place. If a person literally has nowhere else to go, then enforcement of the anti-camping ordinance against that person criminalizes her for being homeless.”

The Statement from the Department of Justice concluded: “Thus, criminalizing homelessness is both unconstitutional and misguided public policy, leading to worse outcomes for people who are homeless and for their communities. If the Court finds that it is impossible for homeless individuals to secure shelter space on some nights because no beds are available, no shelter meets their disability needs or they have exceeded the maximum stay limitations, then the Court should also find that enforcement of the ordinances under those circumstances criminalizes the status of being homeless and violates the Eighth Amendment to the Constitution.”

Regrettably, the Boise case was dismissed on standing grounds but it continues to have a profound impact on the criminalization of homelessness and particularly on the enforcement of camping bans by local municipalities. Activists in Santa Cruz continue to vigorously lobby the NLCHP to commence a Bell v. Boise-based lawsuit in hopes that the articulated position can become a matter of federal case law to the benefit of houseless communities everywhere.

And that brings us full circle to the present situation in Santa Cruz. Limiting the issuance of camping ban citations except as “complaint driven” and tacitly providing a “safe space” for downtown houseless may be seen as an effort to head off costly litigation. But some progress is being made and some hope has been kindled. As the Chief said in his recent Op Ed in the Santa Cruz Sentinel, “I believe we can break the cycle of reactionary homeless policies”. And with the Emergency Winter Shelter coming on line next month and new energy being generated around the Common Ground safe spaces sleeping proposal being offered by Rabbi Phil Posner, there is additional reason for hope. However, even with that said and acknowledged, we are far from a community consensus on positive, realistic and practical options for our unsheltered. People experiencing homelessness will continue to be criminalized on the basis of status in violation of their Eighth Amendment right to be free from cruel and unusual punishment so long as there is inadequate shelter for the unsheltered in or community. And so, in that respect, we remain in the “Shadow of Bell v. Boise”.