Add an Event
Newswire
Calendar
Features
Home
Donate
From the Open-Publishing Calendar
From the Open-Publishing Newswire
Indybay Feature
Publish to Newswire
Add an Event
Related Categories: California | Central Valley | Environment & Forest Defense | Government & Elections
CA Indian Water Commission, environmental groups challenge Delta Tunnels financing
by Dan Bacher
Tuesday Sep 19th, 2017 11:52 AM
"The California Indian Water Commission's involvement in this filing is about upholding traditional indigenous responsibilities to the lands and waters of California," said Don Hankins, CIWC President. "With this filing, we affirm our commitment to future generations through protection of the lands and waters of this state, and the associated organisms, which we also maintain obligations to." 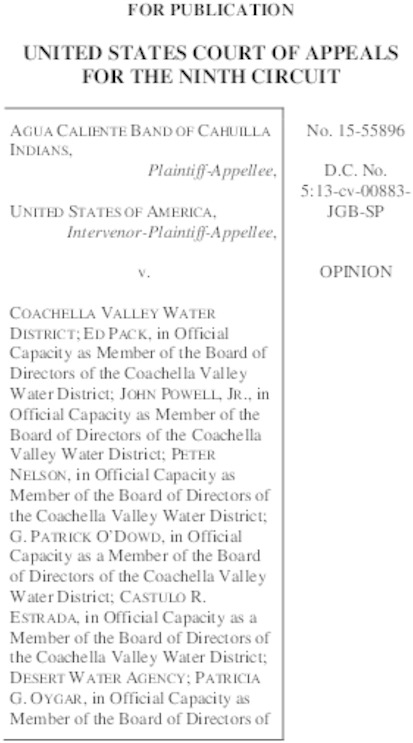 The suit was filed at a critical time for the future of the California WaterFix - the day before the Westlands Water District, Santa Clara Valley Water District and an LA City Council Committee were scheduled to vote on their continued participation in the project.

A recent landmark 9th Circuit ruling that federally reserved Indian water rights have precedent over all state and federal water rights puts a new twist on how much water there really will be available for the tunnels or any other project — and could put a big wrench in state and federal plants to build the massive 35 mile long tunnels under the Sacramento-San Joaquin River Delta. (Please see the PDF posted on this page).

“The state is asking for $11 billion in bonds without identifying the sources of revenue or indicating how total costs will be shared with the Central Valley Project, its Federal partner in the WaterFix,” according to a joint statement from the four groups.

“The State would like a blank check from rate payers to finance the Governor’s tunnels,” said Carolee Krieger, President of the California Water Impact Network (C-WIN.) “With only 10% of the WaterFix engineering and design completed, there is no reliable cost estimate for the tunnels’ financing. This Validation proceeding is premature until these important issues are settled”

Krieger said the state Validation process, if unchallenged, “would allow bonds to be issued for tunnel construction without legislative or individual contractor’s consent.”

"State agencies are driven by the Governor to try and solidify every step of the WaterFix before he leaves office," said Barbara Vlamis, executive director of AquAlliance. "Fortunately we are part of a strong team that is equally determined to protect the source waters in the Sacramento River watershed," she concluded.

"The California Indian Water Commission's involvement in this filing is about upholding traditional indigenous responsibilities to the lands and waters of California," said Don Hankins, President of the federally recognized CIWC. "With this filing, we affirm our commitment to future generations through protection of the lands and waters of this state, and the associated organisms, which we also maintain obligations to."

The Delta Tunnels project is likely to hasten the extinction of Central Valley steelhead, winter-run Chinook salmon, Delta and longfin smelt, green sturgeon and other fish species. It will also imperil the salmon and steelhead populations on the Trinity and Klamath rivers that have been an integral part of the culture, religion, livelihood and subsistence of the Yurok, Karuk, Hoopa Valley tribes for thousands of years.

Westlands will hold a special board meeting for Westlands Water District to vote on the CA WaterFix participation at the district offices, 3130 N. Fresno Street, Fresno CA, 93703. The board meeting agenda can be viewed here: http://wwd.ca.gov/event/board-meeting-41/

SCVWD is hosting a separate special meeting to discuss their Water Supply Master Plan that could potentially include CA WaterFix at the district offices, 5750 Almaden Expy, San Jose, CA 9511. Their board agenda can be viewed here: https://scvwd.legistar.com/Calendar.aspx

Why are all three meetings being held at the same exact time on the same exact day? “Tuesday's public meetings on CA WaterFix in various locations throughout California is another example of the three-card monte being played on California ratepayers and taxpayers as described in Monday’s AP article,” said Barbara Barrigan-Parrilla, Executive Director of Restore the Delta.

On Monday, the Associated Press revealed that "Dozens of water agencies and millions of families and farmers would be on the hook for building two giant tunnels to carry Northern California’s water southward under new plans to shore up funding for Gov. Jerry Brown’s $16 billion project."

“How can the City of Los Angeles vote on a project for which one of the biggest contributing partners is demanding additional water allocations and financial contributions from other contractors, seeing it won't benefit LA residents?" Barrigan-Parrilla asked.

“How can Santa Clara Valley Water District discuss finance planning for the project when their biggest partner on the Central Valley Project side, Westlands, may be postponing their vote until October 17th, and is insisting on participation by contractors who will not benefit? And how can SCVWD staff and some Board Members continue to understate the pressure from Governor Brown's Administration and the State Water Contractors to participate in this project that will not benefit Silicon Valley because they are being threatened with reduced water allocations and goodies for the District?" she questioned

Barrigan-Parrilla concluded, “We want to know which of our elected officials in California has the honesty and integrity to come clean about the fix that is in for decades of debt placed on all Californians to build what will be dry Delta tunnels."
Add Your Comments
Support Independent Media
We are 100% volunteer and depend on your participation to sustain our efforts!