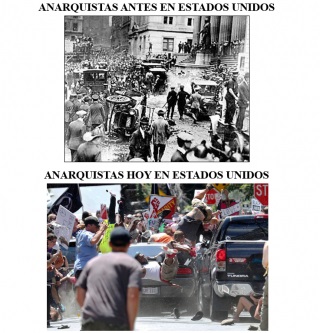 Over a week ago, an article was posted on Indybay.org that reflected on an altercation between someone at the Seattle Anarchist Bookfair and people tabling with Little Black Cart (LBC). This article will not attempt to go into detail about the altercation, nor a background of eco-extremism, ITS, or past arguments about it. The point of this essay is brief, but we think it is important.

In the latest episode of the Brilliant, a podcast associated with LBC, the hosts lament on the lack of real world dialogue and discussion, specifically around eco-extremism. They contend that another website which has published two critiques of ITS; specifically how they have issued death threats against anarchists, claimed to have killed random people, use sexist and homophobic slurs, and have even left a bomb outside of a long running anarchist squat, are hall monitors that want to censor what people read, limit the terms of debate, frame who is good and bad, and more over, press impressionable young minds, referred to as "patsies" by the main show host, into attacking the people behind LBC.

Like Little Black Cart, we think dialog and free expression is important. We don't think anyone should be censored, especially not radicals. In the spirit of free and open dialog we have taken it upon ourselves to help in the spreading of two recent translations about eco-extemism. We hope that everyone will find this interesting!

The first is from the eco-extremist blog "Maldicion Eco-Extremista," which according to the editor of the Atassa journal, is one of the main blogs that he pulls from to do translations which are then published on anarchistnews.org, in the Atassa journal, and are shared on the Atassa Facebook page. This communique has not been posted yet - on any of the usual platforms. But, in the spirit of free speech, we have decided to help Atassa in their heavy work load. This is not the full translation, but if you are a real rebel and are truly a dangerous thought criminal, yet to be brainwashed by the Strugglismo 'Social Justice Warrior' "under his eye" regime, you can read it here - if you have the courage:
http://maldicionecoextremista.altervista.org/eco-extremismo-en-estados-unidos/

In this communique, eco-extremists give a big shout out to their friends in the US and name drop a couple of projects. It reads:

"It's known by many that the writers and propagandists in the U.S. who identify with the tendency of eco-extremism have been growing during these recent moons, as have the many projects in those territories where the most courageous natives shared their surroundings with buffalos, eagles, elk, bears, salmon, etc.

The northern lands of the American continent are being won over by the tendency that moves away from political humanism and spits mockingly on hyper-moral civilized values.

It was obvious that the rabid followers of humanism would protest against the incorrect words and the "atrocious" acts of ITS in Mexico, Argentina, Chile and Brazil. Scared, they would whisper, "I hope ITS doesn't come to the U.S." and that's what happened. ITS hasn't come to the U.S., but (here is the "but") little by little the most emblematic theorists of eco-extremism were arriving, who created publishing projects and put into circulation websites that reproduced the discourse against human progressivism.

The first sign we have to support this is the publication of Atassa magazine, the first issue of which was a tremendous blow for the humanist slanderers, demonstrating the arrival of eco-extremism to the U.S. The second issue will be a true earthquake for those same defamers of the tendency.

The Little Black Cart publishing house (LBC), has been responsible for launching and disseminating the magazine. The anarchist campaign against eco-extremism has centered on slandering its members, saying that LBC has links to ITS, something that is completely stupid, which shows the dirty tricks these sick leftists use who don't know how to stop the advance of the tendency in their areas.

As is known, [the editor of Atassa] has worked publicly for some time, participating in radio shows, writing interesting reflections, recording audio and videos where he shows his feelings for the tendency (not for nothing is he the chief editor of Atassa magazine), becoming considered by many as a fierce defender of eco-extremism, without fear of paying the legal consequences that entails. [The editor] is undoubtedly the one who holds the reins of the theoretical part of the eco-extremist project in the north of the continent. His persistence and dedication is greatly valued.

Either way, incidents between eco-extremists and their allies with leftists anarchists will continue in the U.S., of that we are sure.

From Maldición Eco-extremista, may the theorists in those territories know that from many places in Latin Ameria we are following your work and appreciate that you are carrying on, despite knowing that you literally have a large majority of the anarcho-weeping movement against you, together with law enforcement agencies: STRENGTH!

With the Unknown on our side!

Encouraging bombs against the anarchist slanderers in Latin America!

Reddened knuckles against the heads of anarchists in the U.S.!"

Whoa! Such fierce and interesting words! I'm a get meh 10 copies!

Our next communiqué comes from some anarchist blog that is complaining about getting threats from an Eco-Extremist group for publishing critiques against them. So much for free speech! Feel free to read the entire blog entry here: https://vozcomoarma.noblogs.org/?p=17889

Also, on this post, the eco-extremist author takes credit for issuing the threats, saying they were just "mocking emails." Don't be a snowflake yo!: http://maldicionecoextremista.altervista.org/chile-unas-palabras-pa-los-chillan-haush-mistico/

"And it's on several blogs that we were participating in one way or another in spreading these critiques [of ITS and eco-extremism] (translating, sending, publishing), we started to receive ridiculous threats from these people. In them, along with revealing information about compañeros, linking them with specific spaces in the struggle (and compromising their security and that of the spaces), they also delighted over attacks by the Islamic State in large European cities as well as over the death of our compañeros, for example Heather Heyer, who was fatally run over by neo-Nazis during a counter-protest in Charlottesville a few weeks ago.

Below I transcribe a fragment of one of those (intimidating?) messages that I received, as it seems particularly revealing. I did not transcribe it in full because in the unpublished part this gang of para-police blabbermouths share specific information about compañeros, informing on where the do their work or stopped doing their political work, and to spread it would compromise these people:

"(...) as the humanist anarchists in the U.S. were run over by neo-Nazis (both groups are cocksuckers), the Islamic State finally struck in Spain where you are, you son of a thousand whores!

While it's true that neither of these acts were carried out by eco-extremists, it's a sign of the wild curse that has fallen on you and your loved ones for defaming us. Be careful, shitty atheist, the ancestral spirits roam free and will torment you until your death!"

Damn, I could slice my cheese on that edge! Extra points for the witty patriarchal and homophobic slurs!

According to Little Black Cart, those that are critical of eco-extremism and their publishing and promotion of their content, are trying to green light violence against them. This is untrue. We do not wish to fight people with LBC, nor do we wish to encourage violence against them. We simply want to be able to be critical of eco-extremism, and by extension ask why LBC wants to be associated with groups that try and kill our friends, especially knowing straight from the horse's mouth, that eco-extremists appreciate all their hard work. Isn't open dialog what LBC says it wants?

In the face of this, anarchists across North and South American have gotten death threats. ITS has also attempted to kill anarchists at the Okupa Che squat in Mexico. For us, these acts are real and material things, and the implications of them deserve a broad discussion.

Lastly, we are sharing a meme that was posted on the main eco-extremist website, that mocks the death of antifascist Heather Heyer in Charlottesville. Move over Alt-Right!
Add Your Comments
LATEST COMMENTS ABOUT THIS ARTICLE
Listed below are the latest comments about this post.
These comments are submitted anonymously by website visitors.