by Anonymous
A tabler for Little Black Cart and an associate violently attacked two anarchists after being confronted about their decision to publish Atassa: Readings in Eco-Extremism.
At the Seattle Anarchist Bookfair on Saturday, August 26, several anarchists confronted Little Black Cart about their decision to publish and distribute Atassa: Readings in Eco-Extremism. For those unfamiliar, eco-extremism is an anti-political tendency that arose in Mexico around 2011 with the group Individualists Tending Towards the Wild, or ITS, and has since morphed and spread to other areas. Its practitioners believe in and carry out indiscriminate murder and violence against any humans in supposed defense of “wild nature” and have threatened anarchists in Mexico and other countries with death, going so far as to place a bomb in an anarchist squatted social center. They also claimed the May 3 femicide of Lesvy Rivera in Mexico City, citing the fact that she was drunk among their motivations. Atassa is not ITS, but as a journal and blog applauds their actions, publishes/translates their writing, and is unequivocally of the eco-extremist tendency. Two relevant critiques of ITS here and here, both by Scott Campbell, who himself has been threatened by them for his condemnations.

After voicing these concerns and being met with smug indifference, one comrade ripped Atassa in half. The LBC tabler responded immediately by grabbing this person by the throat from behind the table, pushing through the table, putting them in a chokehold, and taking them to the ground in an attempt to choke them unconscious. A second comrade punched the attacker in the face in an attempt to get them to release the first. In response, an associate of the LBC tabler jumped on the second comrade from behind in defense of the choking attack, taking them to the ground and punching them repeatedly in the head until they were pulled off by bystanders. The physical conflict ended after the attackers were pulled off and both parties were told to leave by bookfair organizers, as per the bookfair policy. The comrade who was choked was fine, the one punched suffered a mild concussion. Both have received overwhelming support.

LBC escalated the conflict to physical violence extremely quickly. Many people in the immediate vicinity had no idea what was going on: all of a sudden, someone was being choked, another was being beaten, and no one really knew why. It was over quickly and people looked on in shock. Another LBC tabler, after witnessing the beatdown, expressed outrage about the property destruction when they found out their $7 book had been ripped in half. The person who put the comrade in the chokehold, after complaining about being kicked out because the other side had “started it,” was asked if the book was worth as much as the comrade’s neck and stated “Yeah it is.”

The publishing of this book and its distribution in anarchist spaces was a move designed to provoke. It provoked. We leave it up to you to decide what anarchism is better off with: a commitment to anti-authoritarian ethics, or post-modern cheerleading of indiscriminate murder committed by those who refute anything to do with anarchism.

Solidarity with Mexican anarchist comrades, especially those facing threats and intimidation from ITS
§There’s Nothing Anarchist about Eco-Fascism: A Condemnation of ITS
by Comrades 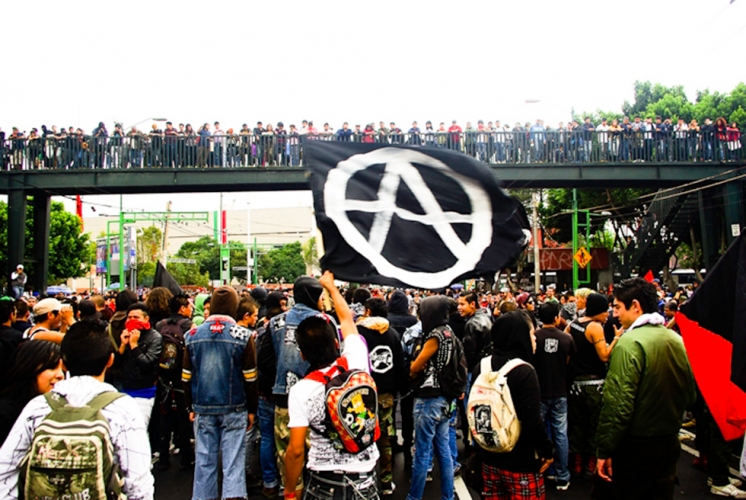 There’s Nothing Anarchist about Eco-Fascism: A Condemnation of ITS
https://itsgoingdown.org/nothing-anarchist-eco-fascism-condemnation/

Some things shouldn’t have to be said, but as is too often the case in this disaster of a world, that which should be most obvious often gets subsumed to the exigencies of politics, ideologies, money, emotion, or internet clicks. The purpose of this piece is to condemn the recent acts of eco-extremists in Mexico and those who cheer them on from abroad.


Not Our Comrades: ITS Attacks on Anarchists
https://itsgoingdown.org/its-attacks-anarchists/

While indiscriminately blowing up civilians based on a twisted, authoritarian ideology places ITS in league with ISIS, al-Qaeda, and the State, of particular concern to anarchists should be the special vehemence ITS reserves for us and the threat it poses to anarchists. With tiresome predictability, ITS goes on and on about how wrong and bad anarchists are. (Undoubtedly this article will receive such a reply.) At times it is not clear who ITS hates more – all of civilization or just us. But in an odd twist, alongside the relentless defamations, ITS also spends a notable about of energy attempting to recuperate selected anarchist history into their eco-extremist ideology, in particular the few attacks by anarchists in which several civilians were killed in the late 1800s and early 1900s. Like a spurned lover, ITS cannot accept that anarchism is just not that into it. So it adopts a defensive position of projected hatred, all the while continual reaching out to anarchism as if to pleadingly say, “See what a few of you did over 100 years ago? You’re just like us. We should be together, even though I hate you.” Yet in its anarchist revisionism, ITS fails to grasp that even in the rare anarchist action which resulted in the loss of civilian life, it has never been anarchist praxis to kill people for the sake of killing people.
Add Your Comments
Support Independent Media
We are 100% volunteer and depend on your participation to sustain our efforts!