Add an Event
Newswire
Calendar
Features
Home
Donate
From the Open-Publishing Calendar
From the Open-Publishing Newswire
Indybay Feature
Publish to Newswire
Add an Event
Related Categories: Santa Cruz Indymedia | Drug War | Health, Housing & Public Services | Police State & Prisons
Recommendations for Action in the MHCAN Crisis
by Robert Norse (rnorse3 [at] hotmail.com)
Sunday Sep 3rd, 2017 6:06 PM
MHCAN (Mental Health Clients Action Network) has faced a crisis for the last several years with police and city agencies breathing down its neck. The management of MHCAN and its Board of Directors has chosen to pursue, largely a low-profile work-behind-the-scenes approach. There's been little publicity about the upcoming Special Use Permit meeting of the Planning Commission which Board Chair Steve Pleich says is slated for 9-28. A month ago, I wrote the following suggestions to the community. 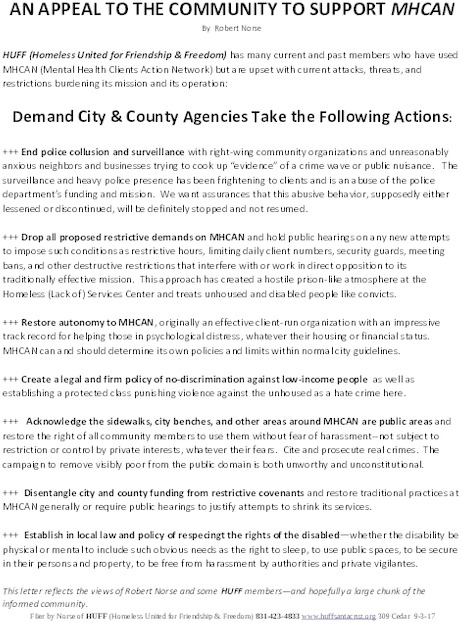 Download PDF (592.5KB)
AN APPEAL TO THE COMMUNITY TO SUPPORT MHCAN
By Robert Norse

HUFF (Homeless United for Friendship & Freedom) has many current and past members who have used MHCAN (Mental Health Clients Action Network) but are upset with current attacks, threats, and restrictions burdening its mission and its operation:

+++ End police collusion and surveillance with right-wing community organizations and unreasonably anxious neighbors and businesses trying to cook up “evidence” of a crime wave or public nuisance. The surveillance and heavy police presence has been frightening to clients and is an abuse of the police department’s funding and mission. We want assurances that this abusive behavior, supposedly either lessened or discontinued, will be definitely stopped and not resumed.

+++ Drop all proposed restrictive demands on MHCAN and hold public hearings on any new attempts to impose such conditions as restrictive hours, limiting daily client numbers, security guards, meeting bans, and other destructive restrictions that interfere with or work in direct opposition to its traditionally effective mission. This approach has created a hostile prison-like atmosphere at the Homeless (Lack of) Services Center and treats unhoused and disabled people like convicts.

+++ Restore autonomy to MHCAN, originally an effective client-run organization with an impressive track record for helping those in psychological distress, whatever their housing or financial status. MHCAN can and should determine its own policies and limits within normal city guidelines.

+++ Create a legal and firm policy of no-discrimination against low-income people as well as establishing a protected class punishing violence against the unhoused as a hate crime here.

+++ Acknowledge the sidewalks, city benches, and other areas around MHCAN are public areas and restore the right of all community members to use them without fear of harassment--not subject to restriction or control by private interests, whatever their fears. Cite and prosecute real crimes. The campaign to remove visibly poor from the public domain is both unworthy and unconstitutional.

+++ Disentangle city and county funding from restrictive covenants and restore traditional practices at MHCAN generally or require public hearings to justify attempts to shrink its services.

+++ Establish in local law and policy of respecingt the rights of the disabled—whether the disability be physical or mental to include such obvious needs as the right to sleep, to use public spaces, to be secure in their persons and property, to be free from harassment by authorities and private vigilantes.

This letter reflects the views of Robert Norse and some HUFF members—and hopefully a large chunk of the informed community.

Flier by Norse of HUFF (Homeless United for Friendship & Freedom) 831-423-4833 http://www.huffsantacruz.org 309 Cedar 9-3-17
Add Your Comments
LATEST COMMENTS ABOUT THIS ARTICLE
Listed below are the latest comments about this post.
These comments are submitted anonymously by website visitors.