here some news (in german language):

https://de.indymedia.org/node/13518
§Indymedia Germany Prohibited
by german communist Friday Aug 25th, 2017 2:44 AM
The german ministry of the interior has prohibited the german indymedia.

The german ministry of the interior today has prohibited the main german indymedia-site "linksunten.indymedia.org". The site is offline since a few hours. Going along with the prohibition there have been several police-raids at assumed operators. Indymedia Linksunten was founded 2009 as an indymedia for south-western germany, but soon became the main indymedia-site for all of germany and has been watched by the "Verfassungsschutz" (constitutionguard, the intelligence service for interior) since years.

Apparently the older site de.indymedia.org is not affected by the prohibition and is still online.

The prohibition can be seen as a result of the campaign against leftists by right-wing politicians and mainstream media following the riots at the g20-summit in Hamburg. 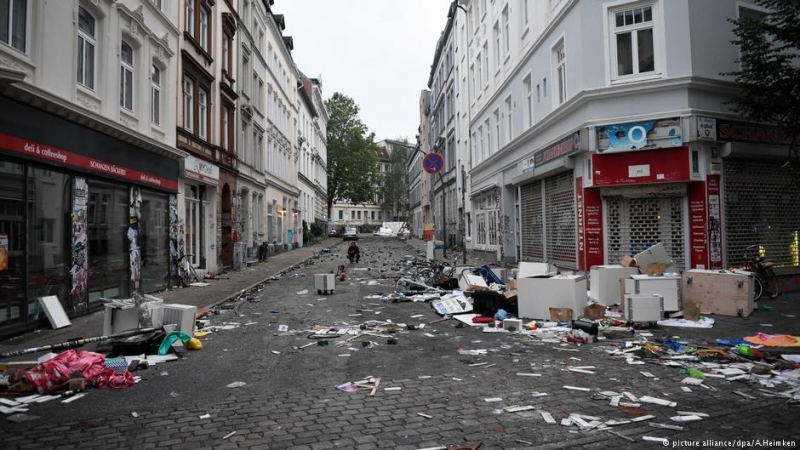 original image (940x529)
[ "Schanzenviertel" covered in debris. This part of town was the scene of escalating violence. That did not come as a surprise: The quarter is traditionally the hub of Hamburg's leftist activists. It has been subject to gentrification, turning into a "hip" place to live and magnet for tourists. ]

Germany's Interior Ministry on Friday banned and ordered raids on a portal popular with leftist readers and activists. Possibly the last posts from linksunten.indymedia.org - commemorations of a 1992 far-right mob attack on apartments where foreigners lived in Rostock-Lichtenberg and reports of racist graffiti on a memorial to a young woman killed by neo-Nazis in the United States - went live the previous night.

The site was closed for "sowing hate against different opinions and representatives of the country," saidInterior Minister Thomas de Maizière, adding that the operation of the site was now "a criminal offence."

He said authorities were treating linksunten.indymedia.org as an "association" rather than a news outlet, which would help officials get around constitutional protections on freedom of expression. De Maizière said at least two people constituted an association - the site has up to seven administrators - and the ban would not affect the international award-winning Indymedia network.

"We are currently searching multiple facilities," said Baden-Württemberg state Interior Minister Thomas Strobl, a member of German Chancellor Angela Merkel's Christian Democrats, which is also de Maizière's party. Though the authorities planned to confiscate computers and other goods, arrests were not in the immediate offing, he said. Knives and clubs were apparently found at some of the properties.

The ban comes seven weeks after demonstrations around the G20 meeting in Hamburg, during which TV viewers were treated to images of what appeared to be pitched battles between police and protesters. Though fact-checks and follow-up reports debunked much of the more sensational coverage, and only one person has been charged with anything so far, Germany's main political parties promised a crackdown on dangerous dissenters.

News of the ban triggered a heated debate on social media. While conservative political parties welcomed the ban, Alice Weidel, candidate for the nationalist right-wing Alternative for Germany (AfD) party, suggested on Twitter it had been motivated by the upcoming German election.

"Indymedia ban [is] indeed a result of the 2017 election campaign, but [is] a correct and long-overdue decision," Weidel's tweet said, plus the party's election slogan "trau dich Deutschland," which loosely translates as a call to Germans to "have courage."

Other Twitter users pointed out that the site was often used as a source by domestic intelligence agencies to track left-wing extremism - a point also made by the association of German criminal police officers (BDK), whose Hamburg chief Jan Reinecke said the platform "had even been important for police tactics, as a way to observe the leftist scene, their plans and claims of responsibility. That will be lacking for police officers in future."

Reinecke told the Hamburger Abendblatt that "determined action against left-wing extremists" was important, but that the Interior Ministry's measure was "more election campaign symbolism than a meaningful action against leftist radicals."

A club or a media organization?

Halina Wawzyniak, digital rights spokeswoman for the socialist Left party, questioned how the Interior Ministry could define linksunten as a "club."

Justifying the ban, de Maizière said that the measures were a "consistent" action against "left-wing extremist hate speech," before adding, "The call for violence against police officers and their description as 'pigs' and 'murderers' is supposed to legitimize violence against policemen. It is the expression of an attitude that tramples on human dignity."

But Left party parliamentarian Ulla Jelpke countered that while she condemns "any sort of call to violence," her party still sees the ban as an "illegitimate act of censorship, and a willful cut in the freedom of speech and press freedom."

"I find a lot of the things on this page very stupid - I can't condone a lot of it," she added. "If you have articles that are anti-capitalist, but otherwise are not prosecutable - our constitution allows you to be anti-capitalist. So the question is - who does it affect tomorrow, people who support anti-capitalist politics?"

She also pointed out that the ban, which is still likely to face a legal test, comes under the law banning associations was particularly problematic, since it means that anyone who works on the site or engages in it faces prosecution - not just people who post prosecutable content. "It's certainly a media organization," she said.

Linksunten was a subdomain of the global network of activists and journalists Indymedia, founded in 1999, which has won digital media awards in Germany including the 2002 "poldi" for politics and education. In the latest article on the German Indymedia site, the ban was condemned as a "serious attack on the left-wing movement and press freedom."

In its article on Friday's ban, the independent media organization Netzpolitik - which focusses on internet freedom - described Linksunten as one of Germany's first citizen journalism sites, where users could post accounts of demos and protests that countered the narratives presented in the "mainstream media." Linksunten was also used as a platform to track far-right extremism in Germany - it was recently used to publish leaked WhatsApp messages exchanged by AfD members.

Linksunten.indymedia.org served as a free-form forum for anti-capitalists, anti-fascists, squatters, proponents of open borders and other malcontents. "Every day, thousands of leftists visit the website to inform themselves of all aspects of antagonistic trends," says the administrators' description.

Activists found a clearinghouse of sit-ins and other occupations, direct actions that sometimes led to property vandalism, and opportunities for confrontation with far-right factions such as neo-Nazis, the anti-Islam PEGIDA movement and the Alternative for Germany (AfD) party.

"For years, it has offered a forum for extensive obtrusive reports about far-left agitation and crimes," Germany's domestic intelligence reported.

The site's anonymous nature allowed users to post without, they thought, repercussions and led to inflammatory entries. "You should hunt Nazis, you should box Nazis," a user wrote. "And the pigs, too." The anonymous threat to police - called "bulls" in Germany - led officials to determine that the site had become a "lawless realm," and, for now at least, the authorities have ended it.
http://amp.dw.com/en/interior-ministry-shu...
§Site appears to be back up
by Ed Saturday Aug 26th, 2017 8:35 AM
The site appears to be back up, perhaps it is being hosted in a different country now? There is a statement in German and a picture of Barbara Streisand (see "Streisand effect").
Add Your Comments
Support Independent Media
We are 100% volunteer and depend on your participation to sustain our efforts!