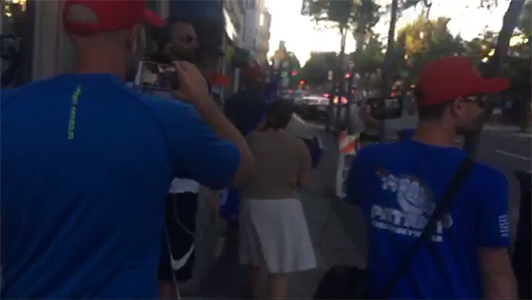 On the evening of July 8, a small group of red hats spontaneously decided to hold what they called a “social experiment,” in which they would walk around Berkeley openly with their Trump gear. That it was spontaneous and unannounced beforehand was a requirement for them, as was the fact that almost every single one of them was operating a camera and livestreaming their activity online. They’re not brave enough to announce they will be in Berkeley because this would give opposition time to gather and plan, and they know that if they record and/or livestream everything, there would be an even lower risk of being held accountable by the local community. Or so they thought!

Most of the group parked their cars in the Allston Way parking garage located downtown, while some others parked around the nearby MLK Civic Center Park, the site where “free speech” rallies have been organized in recent months for fascist recruitment. Once their livestream was up, they headed from the downtown garage down Shattuck Ave and then up Bancroft, where they made their way to Telegraph Ave.

Despite their cameras and impromptu action, this group of far-right trolls was challenged everywhere they went in Berkeley. They were followed, shouted down, and nearly got into physical fights several times. Calls to stick together and “keep it tight” were frequent from inside the tiny and pathetic band of bigots. Once they were allegedly threatened with being stabbed by a passerby on the street, they’d finally realized how unsafe it was for them to be doing what they were doing. After calling the police and begging for an escort, they made their way back to their cars along a similar route as when they arrived, with the addition of a few cop cars following close by for protection.

While they walked around with police supervision, they defaced anti-fascist posters, crossing out “anti” and leaving the word “fascist" and getting a thumbs up from BPD waiting in the car. They argued with anti-racist skinheads and nearly broke their own brains trying to understand how such a thing can exist (read a book and learn some history, trolls). The most prominent streamer in the group, Vincent James of The Red Elephants, gloated over the presence of token people of color among them and used them as a shield against claims they were white supremacists, despite the fact that he himself has close relationships with members of a violent neo-nazi gang called DIY Division/Rise Above Movement. James later explained to one black person in their crew how good it is for him to be an "uncle tom." During their stroll, some in the group recounted what happened on the night of February 1, when Milo Yiannopoulos and the Berkeley College Republicans were shut down and defeated. They nearly cried when they walked by what they perceived to be damage that’s still been left in the city from that night, which it seems they will never get over, like a stalker trying to hang on after a bad breakup.

At the end of the day, they’re short-lived and bumbled action didn’t prove much except that these people are terrified. And they should be! Hate crimes in Berkeley, like elsewhere, have increased since the election. Far right meet-ups like this, big or small, are never just innocent fun for them. Recent fascist rallies in the city have not only erupted in violence but also lead to less spectacular acts of terror such as the shooting at windows of local Berkeley businesses displaying Black Lives Matter signs. If it’s not their material acts of intimidation, it’s the attempt to put up posters, stickers, or other propaganda in order to create a climate of fear, until the next time some attack takes place.

It is not only justified to unite as a community in and drive these people out of it in self defense, it is simply necessary for us, our loved ones, and our neighbors if we want to be safe. They plan to come back to the Bay Area next month for a “Patriot Weekend.” Joey Gibson is organizing a “Free Speech rally” in San Francisco on August 26 and a fan club of Based Stickman Kyle Chapman is organizing a “No to Marxism in America” rally in Berkeley on August 27. Both of these groups are close and have been coordinating. Let’s do the same and plan now how we will let them know that their hate is not welcome here in the Bay!
Add Your Comments
LATEST COMMENTS ABOUT THIS ARTICLE
Listed below are the latest comments about this post.
These comments are submitted anonymously by website visitors.