Photo: Governor Brown and President Xi of the People's Republic of China meet on Day 3, June 6, of Brown's trip to China. Photo courtesy of Governor's Office. 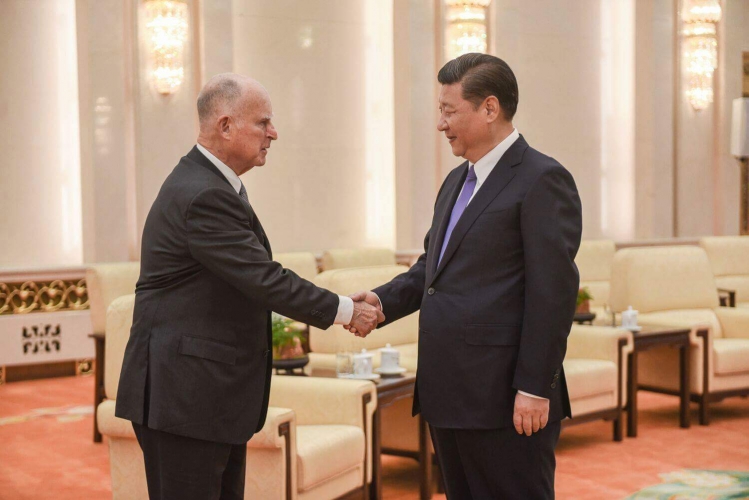 California Jerry Brown announced on July 6, via video message at the Global Citizen Festival in Hamburg, Germany, that the state will convene the “world’s climate leaders” in San Francisco in September 2018 for a “Global Climate Action Summit.”

Brown made the announcement at a time when increasing numbers of Californians are challenging his “environmental” and “climate” credentials as he teams up with the Donald Trump administration to build the controversial Delta Tunnels and to exempt three major California oilfields from protection under the federal Safe Water Drinking Act. (https://www.counterpunch.org/2017/02/17/trump-administration-exempts-three-ca-oil-fields-from-water-protection-rule-at-jerry-browns-request/)

“It’s up to you and it’s up to me and tens of millions of other people to get it together to roll back the forces of carbonization and join together to combat the existential threat of climate change," said Governor Brown in his remarks on the eve of the G20 Summit. “That is why we’re having the Climate Action Summit in San Francisco, September 2018.”

“President Trump is trying to get out of the Paris Agreement, but he doesn’t speak for the rest of America. We in California and in states all across America believe it’s time to act, it’s time to join together and that’s why at this Climate Action Summit we’re going to get it done,” he claimed.

After hearing the announcement, the mainstream media responded with fawning puff pieces portraying Brown as an international “climate leader,” with doing little or no research into the Governor’s actual environmental policies.

“Gov. Jerry Brown of California on Thursday reinforced his reputation as America’s de facto leader on climate change, announcing to cheering crowds in Hamburg, Germany that his state would gather leaders from around the world for a global warming summit next year," wrote Lisa Friedman of the New York Times.

“Speaking by videoconference to the Global Citizens Festival in Hamburg, where President Donald Trump is joining other world leaders for the Group of 20 economic summit, Governor Brown said the president ‘doesn’t speak for the rest of America’ in pulling out of the Paris agreement on climate change,” Friedman said. (https://www.nytimes.com/2017/07/06/climate/jerry-brown-california-climate-summit.html)

The New York Times didn’t mention that “America's de facto leader on climate change” received $9.8 million from oil, gas and utility companies, often within days of winning big favors, since he ran for Governor, according to a report released by the the Santa Monica-based Consumer Watchdog last August: http://www.consumerwatchdog.org/dirtyhands

Liza Tucker, consumer advocate for Consumer Watchdog, responded to the announcement by challenging the Governor to hold the summit in Northern California’s Richmond or in Southern California cities like Wilmington or Torrance—home to emissions-spewing refineries.

“It’s time to get real about the need to regulate refinery emissions directly and as quickly as possible when their global warming gases come in a package with toxic, smog-forming chemicals and murderous fine particles that lodge deep in the lungs and other organs of children as well as adults,” said Tucker, who has relentlessly exposed Brown's anti-environmental and pro-Big Oil policies that betray his “green” rhetoric.

“So far, Governor Brown has failed on this score, and is considering the exemption of refineries from air pollution regulation. But it is these California communities who are feeling the consequences of global warming’s pollution. It may be more comfortable to hold a summit and dine in San Francisco, but the proper venue is a refinery town that must be seen to be understood,” Tucker stated.

For example, she said data for Richmond, home to a Chevron refinery, reveals that refinery community residents are one-and-a half times more likely to die from heart disease and strokes than the Contra Costa County average, according to a 2010 report by the Contra Costa Health Services’ Public Health Division.

Tucker pointed out out that Brown’s call for a summit comes as he spearheads negotiations to extend California’s 2006 law on capping global warming emissions and trading pollution allowances past 2020, when it is set to expire.

“Consumer Watchdog recently obtained documents showing that Governor Brown is shopping cap and trade bill language directly from Big Oil’s playbook to exempt refineries from air pollution regulation as part of a deal to extend the program. If introduced and enacted, the legislation would block powerful Air Districts in the Bay Area and Los Angeles Basin from setting tough limits on emissions that would leave refineries no choice but to install pollution control equipment,” said Tucker.

“Instead the legislation would hand regulation of refineries to the state regulator in charge of emissions from trucks and cars that is not equipped to oversee refineries. That regulator, the Air Resources Board, would be prohibited from deviating from the use of a prescribed cap and trade system that would keep the program from becoming anything more than just another cost of doing business,” said Tucker.

As is the case with the leaders of many consumer, Indigenous and environmental organizations, Tucker is highly critical of neoliberal carbon trading policies that do little to actually lower emissions while at the same time imperiling Indigenous and front line communities across the globe.

“California’s cap and trade system has done little to lower emissions of global warming in the state and, as currently envisioned, will not meet the state’s aggressive goal of lowering emissions 40 percent below 1990 levels by 2030,” said Tucker. “Instead, researchers have found that emissions have actually risen from high emissions-producing sectors such as refineries since cap and trade was introduced.”

On June 28, In These Times revealed that leaked documents show that the Brown administration is promoting a cap-and-trade measure, not yet a bill, “that’s laden with talking points that appear to be ripped near verbatim from a policy paper by the state’s influential oil and gas lobby.” (http://inthesetimes.com/article/20282/jerry-brown-climate-change-sb775)

The opposition to carbon trading was spotlighted at the end of Governor Jerry Brown’s keynote address at the World Climate Summit in Paris on December 8, 2015, when indigenous leaders heckled Brown, challenging him on his support of controversial carbon trading polices that they say represent “a new form of colonialism” that could potentially cause genocide.

Brown had just finished his brief remarks when Penny Opal Plant of Idle No More, San Francisco Bay, stood up and shouted, “Richmond, California says no to REDD and no to evacuating indigenous people from their forests. NO REDD!”

Indigenous leaders and environmental activists in the room around her joined her in yelling, "NO REDD!"

Meanwhile, the Trump administration on June 26 released a no-jeopardy finding on the biological assessment to build the tunnels, claiming that the California WaterFix will not jeopardize threatened or endangered species or adversely modify their critical habitat. The biological opinion is available here: https://www.fws.gov/sfbaydelta/HabitatConservation/CalWaterFix/Index.htm

The Brown administration praised the deeply flawed biological opinion, a document that may have been politically manipulated, in spite of the vow Jerry Brown made in January to “resist” Trump administration attacks on science.

"We've got the scientists, we've got the lawyers and we're ready to fight," Brown said during a speech to the American Geophysical Union in San Francisco. (http://touch.latimes.com/#section/-1/article/p2p-92125641/)

However, Michelle Banonis, Assistant Chief Deputy Director at the California Department of Water Resources, was hardly ready “ready to fight” when she spoke at a joint teleconference, a virtual lovefest between the two administrations to promote the decision.

Banonis gushed, “On behalf of the California Department of Water Resources, I would like to thank the US FWS (US Fish and Wildlife Service) and the NMFS (National Marine Fisheries Service) for their significant efforts in putting together the biological opinion for California Water Fix. We feel this is a momentous step towards the future and we feel that this will help in the future in balancing between water and environmental resources in California."

In spite of California's reputation as a "green leader, Big Oil is the largest corporate lobby in the state and exerts enormous influence over the Governor's Office, Legislature and regulatory agencies.

The spending amounts to $1.5 million per month — nearly $50,000 per day — over the last two years. The $36.1 million surpassed the $34 million spent in the prior session, according to an American Lung Association report. “That’s enough money to buy 103,000 goats,” reported Stop Fooling California, stopfoolingca.org.

The Western States Petroleum Association (WSPA) was the top overall oil industry spender during the 2015-16 session, spending $18.7 million. As is normally the case, WSPA ranked #1 among all lobbying spenders this session.

Chevron, the second overall oil industry spender, spent $7 million in the 2015-16 session. It spent $3 million in 2016, sixth among all lobbyists in the current session.

The spending by Steyer’s group helped propel the passage of Senate Bill 32, legislation that reduces greenhouse gas level to 40 percent below 1990 levels by 2030, in spite of strong opposition by the oil industry.

Since the 2007-08 Session, the oil industry has spent $133 million in lobbying in California.

To read the complete report, go to: http://www.lung.org/local-content/california/documents/Oil-Industry-Lobbying-2016-update-4_1-31-17.pdf