Add an Event
Newswire
Calendar
Features
Home
Donate
From the Open-Publishing Calendar
From the Open-Publishing Newswire
Indybay Feature
Publish to Newswire
Add an Event
Related Categories: International | Global Justice & Anti-Capitalism
To Live in Revolutionary Time: The Formation of Local Councils by Omar Aziz
by Bordered by Silence
Wednesday May 10th, 2017 3:47 PM
Translation of Omar Aziz's text on the formation of local councils in the Syrian Revolution 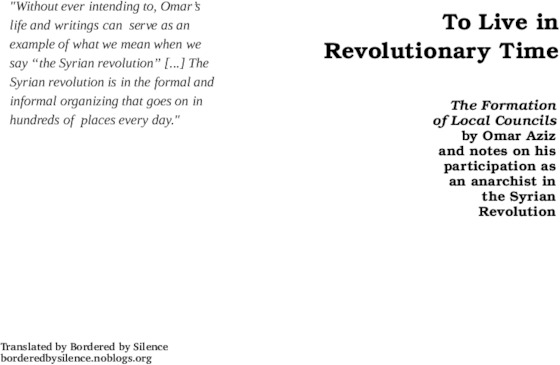 On 17 February 2013, the Local Coordination Committees of the Syrian revolution reported that Omar Aziz, prominent Syrian intellectual, economist, and long-time anarchist dissident, died of a heart attack in the central Adra prison. Held incommunicado by the air force intelligence since 20 November 2012, the big and warm – albeit ailing – heart of Omar Aziz could not stand almost three months of detention inside the infamous dungeons of the Assad regime. The reports of his passing emerged on the second anniversary of the Hariqa market protest, when 1,500 Syrians vowed for the first time not to be humiliated in the heart of Old Damascus. Aziz leaves behind a rich, significant legacy of ground-breaking intellectual, social and political contributions as well as an unfinished revolution and a country in desperate need for people like him. (Budour Hassan: Rest in Power)

Omar Aziz, revolutionary anarchist born in Damascus, was a friend and comrade to many and is fondly remembered and deeply missed. His text, The Formation of Local Councils, remains one of the core strategic proposals of the social revolution in Syria. He first published it in late 2011, and then released an expanded and revised version in February 2012 with a new introduction. This present translation offers the introductions to both versions and the full text of the second version. It doesn’t seem that Omar’s intention was to produce a static, finished text -- with his emphasis on adapting to local context and changing conditions, it’s likely he would have continued to revise and change his proposals. You will notice some repetition between the two introductions, which is simply because the second was written to replace the first, and so they weren’t meant to be displayed side by side. Full intro: https://borderedbysilence.noblogs.org/?p=127&preview=true

https://borderedbysilence.noblogs.org/?p=1...
Add Your Comments
Support Independent Media
We are 100% volunteer and depend on your participation to sustain our efforts!