by California Farmer Justice Collaborative
Today, new US Agriculture Secretary Sonny Perdue was sworn in by Associate Justice Clarence Thomas and convened a group of Agriculture leadership in the White House. Tomorrow, the California Assembly Agriculture Committee weighs in on a path toward California Farm Equity. "With the uncertainty surrounding federal programs and grants, California can and should lead the way by investing in our farmers," said Assemblymember Monique Limón (D-Santa Barbara). "California farmers — particularly farmers from underrepresented communities — have historically faced numerous obstacles but accessing government resources should not be one of them." 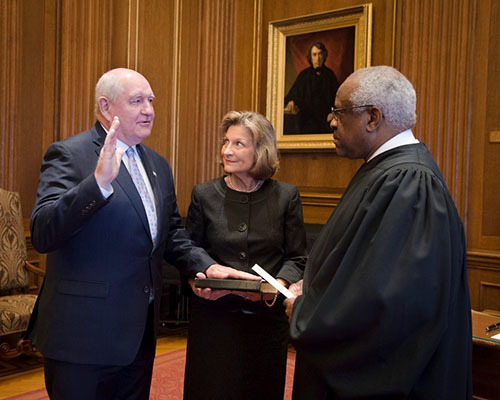 Sacramento, California – Later this week, farmers of color will have their first hearing on a bill that would change the way the California Department of Food and Agriculture (CDFA) engages with this growing demographic of California farmers. Farmer Equity Act (AB 1348) — authored by Assemblymember Cecila Aguiar-Curry (D-Winters) and co-authored by Assemblymembers Caballero (D–Salinas), Eggman (D-Stockton) and Limón (D-Santa Barbara) — defines “Socially Disadvantaged Farmers and Ranchers” in California Food and Agriculture code and enables CDFA to better provide resources, outreach, technical assistance and decision-making power to farmers and ranchers of color who have been historically under-served by the state and federal governments.

"As a farmer, I know how hard it can be to succeed in this business. If you don't know what resources and programs are available to help you, you're already at a disadvantage. On top of that, farmers of color receive less government aid and earn less money on average,” said Assemblymember Aguiar-Curry. “They need a place at the table. The Farmer Equity Act will ensure that we have a plan to include socially disadvantaged farmers in our state’s agricultural programs and decision-making.”

Farmers of color have historically been subject to discriminatory practices in agriculture: from being denied land ownership in the early 19th and 20th centuries, to receiving less in government loans compared to their white counterparts. These historic civil rights struggles led to the codification of “Socially Disadvantaged Farmers and Ranchers” by the U.S. Department of Agriculture (USDA) in the 1990 Farm Bill in efforts to provide better outreach and assistance to these underserved farmers and ranchers.

"Sustainable and local agriculture runs deep in the traditions of California's immigrant farmers and farmers of color, but so do the inequities in accessing grant programs for environmental stewardship and market enhancement” explains Kristyn Leach, a Korean-American farmer in Sunol. “Taking the step to support existing and next generation farmers of color will protect our local food economies, our natural resources and our agricultural traditions in California."

If AB 1348 passes, it will add the the federal definition of “Socially Disadvantaged Farmers and Ranchers” and “Socially Disadvantaged Group” — a group whose members have been subjected to racial, ethnic or gender prejudice because of their identity as members of a group without regard to their individual qualities — to the California Food and Agriculture Code. These groups include people who are African American, American Indian, Alaskan native, Hispanic, Asian-American, Native Hawaiian and Pacific Islander.

"With the uncertainty surrounding federal programs and grants, California can and should lead the way by investing in our farmers," said Assemblymember Monique Limón (D-Santa Barbara). "California farmers — particularly farmers from underrepresented communities — have historically faced numerous obstacles but accessing government resources should not be one of them."

California is leading the nation in the growing diversity of its farmers and ranchers. Between 2007 and 2012, census data show that California has the largest increase of Asian-American farmers of any state with over 3,500 producers. And, today, California ranks third in the nation in concentration of Hispanic/Latino farmers.

Yet, despite this significant growth, farmers of color tend to earn less money on average and receive 36 percent less in government funding than their white counterparts.

“Farmers of color, including Hmong farmers, are often overlooked in California agriculture,” said Chukou Thao, executive director of National Hmong American Farmers, based in Fresno. “California can spur additional innovation in farming by making the necessary investments in and connections to farmers that face barriers due to language, culture or resources.”

AB 1348 will also ensure farmers of color in our urban centers are not overlooked — another growing demographic of farmers crucial for providing food in places where fresh fruits and vegetables can be difficult to find.

“In California, nearly one million people in 371 census tracts live in food deserts. Urban farming has a real chance to ‘transform the hood for good,’ but in many of these tracts it’s easier to get a fifth of vodka than it is to get fresh fruit and vegetables,” explains Chanowk Yisrael, founder of Yisrael Family Farms. “Urban farmers are grassroots organizers leading the charge to combat impacts of eating in food deserts, but face unique barriers related to water, food sales and soil contamination. This is why urban farmers, especially those who are non-white, deserve a voice in policymaking.”

Advocates say it is time for California to recognize this growing shift in farmer demographics and adequately enhance and modify their outreach, technical assistance, resources and decision-making power to these farmers crucial for producing our food.

Currently, in the absence of adequate state outreach and technical assistance, nonprofits have been filling the void:

Reggie Knox from California FarmLink, a nonprofit Community Development Financial Institution that provides capital and land access to small farmers, many of whom are farmers of color, explains: "The average age of today's farmer in California is 60, and the backbone of the next generation of California agriculture is changing and diversifying. Beginning farmers, many of whom are increasingly farmers of color, face significant barriers to enter agriculture. Support from FarmLink and its peers is tailored to prepare California's newest farmers for success. The State of California can also take steps to fully equip them to feed the state and fuel its economy.”

AB 1348 is opportune, as more resources for farmers and ranchers have been emerging in recent years through CDFA programs and farmland conservation strategies. This bill will ensure all farmers have fair access to these important resources.

The bill would also ensure greater coordination of programs and policies for farmers of color by requiring CDFA to consult with other state agencies and enabling the Department to hire a position dedicated to integrating Socially Disadvantaged Farmers and Ranchers throughout department programs and policies. Additionally, AB 1348 requires CDFA to prepare a report to identify the barriers farmers face, as well as opportunities, for greater engagement and support.

Contact: Paul Towers, ptowers [at] panna.org (link sends e-mail), 916-216-1082
Add Your Comments
Support Independent Media
We are 100% volunteer and depend on your participation to sustain our efforts!