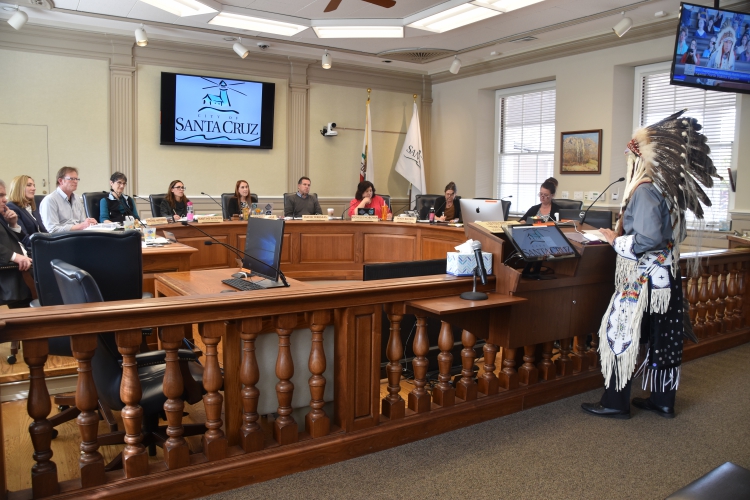 original image (6000x4000)
“The common threads between these resolutions are recognizing the sovereignty of the people who are indigenous to this land, safeguarding the natural world against destruction and disruption of life-sustaining systems, and putting the value of money and life back into a right relationship,” says Nancy Park, a Santa Cruz resident who has been working closely with city hall in matters of divestment.

The resolution regarding Trump’s wall follows public concern over the city’s affiliations with Granite Construction, a Watsonville based company that has signified interest in building the controversial border project. The Council’s agenda report cites human rights, environmental impact, and economic problems in recommending the city denounce both the border wall and divest from any companies involved in its construction.

Earlier this month, the Council unanimously passed a resolution formally supporting the Standing Rock Sioux Tribe in their opposition to DAPL. This resolution, if passed, would require the city to immediately ban business with Wells Fargo — with whom the city annually transacts $270 million via its checking account — and terminate any holdings with Comerica and Bank of America within 90 days, for a period of five years.

A community organizer and surviving member of Mescalero and Yoeme Nations, Ernestina Saldana has been active in campaigning for the city to divest from these projects, stating “these companies are capable of destruction by partnering with big banks that invest their stocks, bonds and funds into construction of pipelines, detention centers and walls dividing countries. It’s our responsibility to do our part to ensure our children and grandchildren have a chance to exist.”


Santa Cruz Defunds Injustice
https://www.facebook.com/Santa-Cruz-Defunds-Injustice-198050240687393/
Add Your Comments
Support Independent Media
We are 100% volunteer and depend on your participation to sustain our efforts!