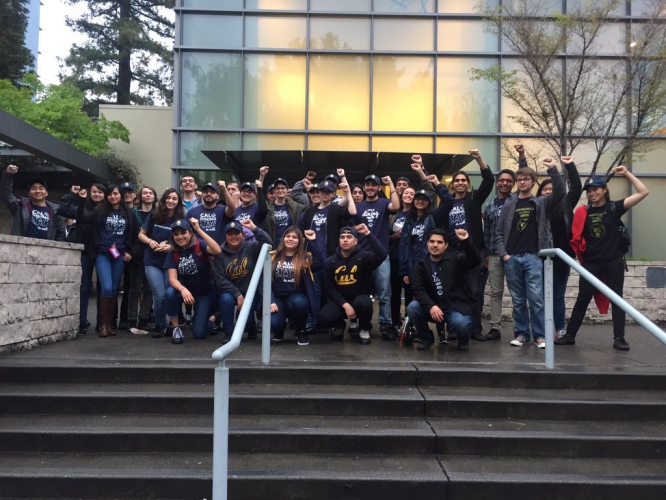 original image (1024x768)
For the past week, student workers at UC Berkeley have been staging walkouts during various shifts in the dining halls across campus to put the pressure on Cal Dining management to meet our demands for a living wage of $16.81 and compensation for tens of thousands of dollars in stolen wages. After seven walkouts, management has retaliated by starving us out, eliminating entire works shifts, such as the popular late night at Foothill Dining Hall and continuous service at Crossroads Dining Hall, which means that students scheduled for those shifts no longer have work. Managers also eliminated the ability for student workers to sub for one another without prior approval from management, done as a means to prevent student workers from subbing another worker in order to facilitate a walkout, but in reality thwarting the common practice among student workers in the dining halls of working extra hours in order to afford food, rent, medications, and other expenses on Cal Dining’s meager wages.

Aggravating the elimination of shifts, numerous student workers received an email from their general managers in the early morning hours of April 22, 2017, notifying them that their employment was on indefinite hold until further notice, and that they were barred from entering their former worksite for any reason – neither to work nor eat. Within hours, it became clear that the student workers effectively fired by management were individuals who were either highly visible in the union or who had major grievances with Cal Dining of wage theft/harassment.

State and federal law protect union activates in the workplace, and explicitly state that employers cannot prohibit or interfere with organizing efforts among their employees, yet Cal Dining is doing just that. The email from general managers warned students that they had less than a week to meet with their managers to confirm their participation in the walkouts in order to allegedly continue working; but by forcing students to sit with management, student workers are expected to condemn the union and swear off from its activities in order to return to work.

For years, Cal Dining has operated under unlawful conditions in which students are forced to perform tasks we are not certified nor paid for, but ordered to do by our managers at the risk of our employment and low-wages, and at the expense of our health and academics. Managers have concealed allegations of sexual harassment made by student workers, called the police on us during demonstrations, fabricated charges to arrest organizers, and are now going as far as targeting specific workers for termination. The targeted firing of student workers attempting to organize around the workplace is illegal, and the UWU is prepared to take legal action against Cal Dining and the university.

Crucial to the escalating actions by the UWU, and the consequent retaliation by management, is that April 22 is Cal Day, an enormous annual event thrown by university departments and programs, including Cal Dining, to illustriously display what they have to offer to prospective students and their families. In response to Cal Dining and the university’s indifference towards our demands for a living wage and back pay, and now the reinstatement of those illegally fired, student workers from not one, but every major dining hall walked off the shift at peak brunch hour and marched towards campus. Assembled along Sather Gate, student workers and allies blocked off the main pathway taken by students and campus visitors. With a blockade underway, student workers revealed to incoming freshman and current students the deplorable working conditions of Cal Dining and the unaffordable cost of attending UC Berkeley.

As the UWU prepares to fight back against the erroneous actions taken by Cal Dining, we are asking for solidarity by everyone in demanding the reinstatement of student workers fired by Cal Dining management for participating in workplace organizing, and for them to meet our demands.

https://twitter.com/UWUatCal
https://www.facebook.com/theuwu.cal/
https://itsgoingdown.org/berkeley-after-wo...
Add Your Comments
Support Independent Media
We are 100% volunteer and depend on your participation to sustain our efforts!