Add an Event
Newswire
Calendar
Features
Home
Donate
From the Open-Publishing Calendar
From the Open-Publishing Newswire
Indybay Feature
Publish to Newswire
Add an Event
Related Categories: California | Central Valley | East Bay | U.S. | Global Justice & Anti-Capitalism | Health, Housing & Public Services | Racial Justice | Womyn
Donate to the Woman Brutally Assaulted by Nathan Damigo of Identity Europa in Berkeley
by Anti-Fascist News
Sunday Apr 16th, 2017 11:43 AM
We believe it is essential to provide support for those who risked their lives to confront white nationalists on the street, and that it is extra important for those who were victimized with targeted violence. 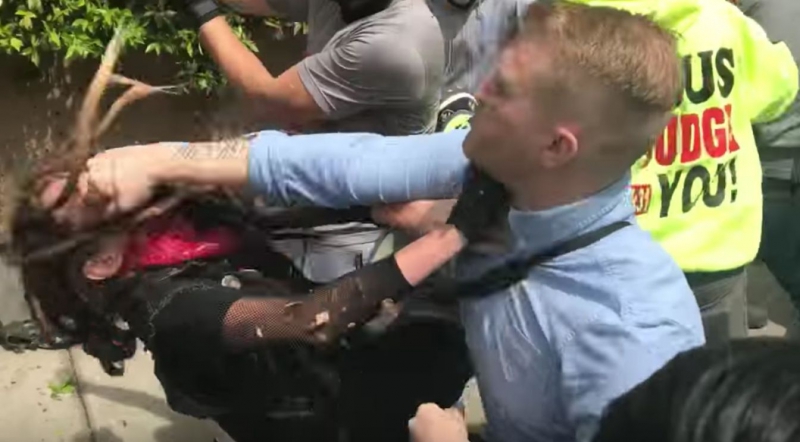 The events at Berkeley on April 15th show that the resistance to the Alt Right is mounting, but also that they want to victimize protesters with brutal violence. The video that has gone viral is of Identity Europa founder Nathan Damigo brutally attacking a woman in the crowd, an act that is less than shocking given Damigo's own history of hate crimes and the patriarchal violence his white nationalist community relies on. That woman is now facing harassment and doxxing by white nationalists online, as well as had to be hospitalized for a concussion.

According to the GoFundMe created to support her:

As if being hospitalized with a concussion by the infamous founder, Nathan Damigo of the neo-nazi organization Identity Evropa wasn't punishment enough for 95lb Louise Rosealma -for her protest at the grizzly display of violent chauvinism she'd braved to take a stand against Saturday afternoon in Berkeley- she's since become sensationalized by the online fascist community as a prized target for the unrelenting viral campaign of death and rape-threats to follow that seem to be increasing by the hour.


Her identity, home and cell phone numbers, home address, emails, friends and family's residences, extremely sensitive and endangering occupational material have all been doxxed and spammed across every unspeakable online message board responsible for Donald Trump's presidency. The poor girl doesn't have a place on earth to hide that hasn't been compromised and it doesn't appear that the onslaught is going to end any time soon.


We don't even know where to begin, she's going to require follow up medical attention, a new residence, new employment, may need to change her identity as well, but we don't want to let the fascists win either and we're encouraging her to seek legal aide to file suit for damages and work to have this repulsive organization shut down. Anything you can offer would be greatly appreciated.

We believe it is essential to provide support for those who risked their lives to confront white nationalists on the street, and that it is extra important for those who were victimized with targeted violence. It seems like Damigo thought that attacking a 100lb woman was an easy way to prove his manhood, but we are a community that bands together to support those who are survivors of this type of violence.

https://antifascistnews.net/
§Update 1: Disgusting Video
by via GoFundMe Sunday Apr 16th, 2017 11:50 AM
Copy the code below to embed this movie into a web page:
Download Video (4.1MB) | Embed Video
This disgusting video was uploaded to YouTube with the title "Cute ANTIFA Girl Gets Punched in The Face - 4/15 Berkeley Pro Free Speech Rally"

Donate: ANTIFA Girl Hospitalized By Nazis!
https://www.gofundme.com/3nj1iqg
§Update: We're Taking the Fight to Its Economic Roots
by Fight Back Tuesday Apr 18th, 2017 10:42 AM
Update: Presently waiting for word back from support at https://www.tiaacharitable.org/how-a-donor-advised-fund-works/ to see if funds (five comrades *one of whom being Louise* serving as the donor/advisory board of the fund) will be receivable toward the establishment of a 501(c)(3) organization for purposes somewhere in the range between a Democracy @ Work Action Group and an Antifa organization. We're taking the fight to its economic roots!
Add Your Comments

§Some punches are disgusting and some are A-okay
by reader
Sunday Apr 16th, 2017 1:08 PM
Give me a break. Of course, any video of a woman being punched in the face is disgusting. But the hoots and cheers for the "nazi" guy who was punched unconscious and lying in the road in Berkeley "because he said something to some Mexicans" were also disgusting.

This is why violence is not the answer. Stop dressing as antifascists and showing up for violence.

Instead, hold a large public positive event nearby, a concert, a series of good speakers, with free food and tabling, to draw people away from looking at the Trump supporters who are wearing armor to keep from getting beat up and who are looking for a fight.

The challenge is to not just rant against them, but create a better world that people can CHOOSE to attend and be a part of, not by suppression of those who are offensive, but by the joyous creativity and actual 'love, not hate' of most people who live in the Bay Area.
Add a Comment
§Nathan Damigo info
by Nathan Damigo info
Sunday Apr 16th, 2017 1:30 PM
Birth Date: 5/12/1986
Residence Address:
14773 Orange Blossom Rd, Oakdale, 95361
Email Address NATHAN.DAMIGO [at] IDENTITYEVROPA.COM
Add a Comment
§Please donate and please do better protests
by Feminist anti-fascist
Sunday Apr 16th, 2017 2:59 PM
It is good to donate to help someone but these fist fights must end since violence is always a downward spiral. It takes a wise person to avoid a fight and that is what everyone should do. Berkeley is only 4% registered Republican so Trump has no base here. See https://en.wikipedia.org/wiki/California_locations_by_voter_registration

The best publicity you can give evil people is NO PUBLICITY, and that means providing alternatives to fist fights. This 30-year-old (too old for childish fist fights) Nathan Damigo is already essentially a registered thug, with his hoodlum prison record. See https://www.indybay.org/newsitems/2017/04/15/18798402.php

The above suggestion of an alternative rally with alternative means of solving problems is a good idea. The Farmer's Market had to be cancelled because of the danger from the fist fights of mostly men, beating each other up, and the inevitable tear gas and pepper spray in the air, making everyone sick. The Farmer's Market is what we, the workingclass, need. An alternative gathering, with free food, would have won far more support and provided for survival of many people.

There is no such thing as white nationalism; it is pure and simple racism. These racists are fascists, hoodlums and thugs. We must never lower ourselves to their level.
Add a Comment
§Nathan Damigo - an ex-felon assaulting women
by naz
Sunday Apr 16th, 2017 3:35 PM
LOCK HIM UP.

Add a Comment
§Nathan Damigo's home address
by Keyser Soze
Sunday Apr 16th, 2017 10:05 PM
14773 ORANGE BLOSSOM RD
OAKDALE, CA 95361-9581
Add a Comment
§Nathan Damigo's address. Send him a letter
by Somebody
Monday Apr 17th, 2017 12:45 AM
If you would like to send Nathan Damigo a letter expressing your opinion of him, his last known address is 14773 Orange Blossom Rd. Oakdale, CA 95361. This is his family home, and where his white supremacist group is registered. Nathan is a convicted felon, convicted of armed robbery. He robbed a man a gun point because he thought he was from Iraq. He servered several years in prison, where he joined a white supremacist gang. Nathan and his family are all either ex military or police. Enforcing systematic racism for decades. Nathan was raised on white Supremacy. Despite being a student in a California university, he could not break his mind free from his racist, antisemitic, sexist ways. Nathan's favorite author is David Duke. He encourages all his hate group members to read the David Duke books he read while in prison. He is nothing but a white supremacist thug, corrupting our youth and he belongs back in prison.
Add a Comment
§A letter?????
by Kaba
Monday Apr 17th, 2017 4:30 AM
Screw a letter! Home demo!
Add a Comment
§Show your support for woman beater Nathan Damigo
by Anti-White Trash
Monday Apr 17th, 2017 9:54 PM
https://anaannblog.wordpress.com/2017/04/18/show-your-support-for-woman-beater-nathan-damigo/
https://anaannblog.wordpress.com/2017/04/1...
Add a Comment
Support Independent Media
We are 100% volunteer and depend on your participation to sustain our efforts!