Newswire
Calendar
Features
Home
Donate
From the Open-Publishing Calendar
From the Open-Publishing Newswire
Indybay Feature
Publish to Newswire
Add an Event
Related Categories: International | Labor & Workers
Puerto Rican Massive Assembly Of University of Puerto Rico Students Prepares For Strike
by repost
Friday Apr 7th, 2017 5:35 AM
Thousands of students and education workers are preparing for a battle to save the University of Puerto Rico from a massive $450 million budget cut and privatization. They are having assemblies and strike votes. 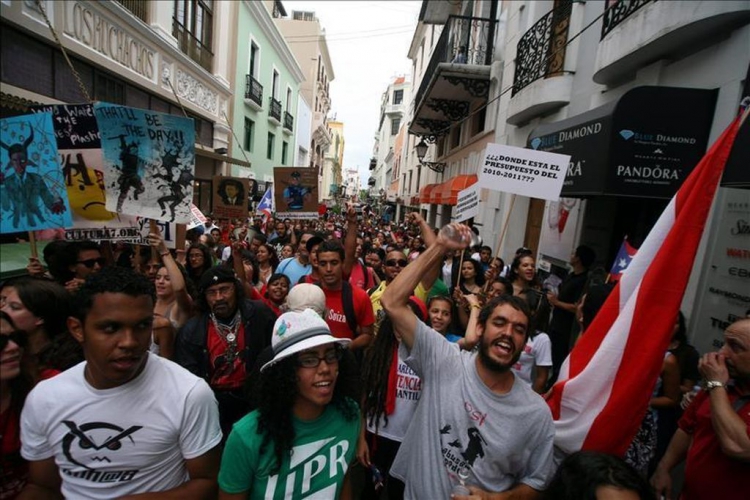 
This week, students at the University of Puerto Rico located in the metropolitan area of Río Piedras declared a strike which has effectively closed down the main campus of the island’s public university system. The students are protesting a plan to cut $450 million in funding to the university system which was demanded by a seven-person Fiscal Control Board imposed under the Obama administration and agreed to by the current colonial administration of Ricardo Rosselló. The planned cuts represented about a third of the public university system’s total budget and would directly affect academic programming, tuition costs and staffing.

Along with these severe cuts to the most important post secondary institution in the country, the Fiscal Control Board has also imposed a series of austerity measures that significantly reduce spending on healthcare, K-12 education and affordable housing programs, impose wage freezes and layoffs on public sector workers, promote the privatization of public entities and increase consumption and property taxes. The current administration recently had to submit a Fiscal Plan to the unelected board for approval and is now required to give regular accounts on the fiscal impact of all new legislation.

The pretext for this combination of cuts to social spending, attacks on labor and increased tax burdens is the $70 billion debt that the colonial government has incurred over several decades. While there is much evidence suggesting that large portions of this debt was incurred illegally, the current administration has vowed to repay despite the disastrous social consequences of the austerity measures being imposed.

It is estimated that between 50 and 60 percent of the current debt is held by hedge funds. This is not a new story as a deteriorating economic situation which began over a decade ago led to increased debt emissions by colonial authorities both in the form of general obligation bonds as well as other bonds tied to recurring revenue streams like a 11.5% VAT tax on consumer goods and surcharges on bills for public entities such as the Puerto Rico Electric Power Authority (PREPA). The inevitable degradation of the island’s credit rating led to a fire sale of Puerto Rico bonds, long prized for their triple tax exempt status, and the entry of the same cast of vulture funds made infamous in places like Argentina, Greece and Detroit.

The students at the University of Puerto Rico have taken a bold step by resisting not only the colonial governments efforts to satisfy the demands of the bondholders through savage social cuts, but also by proposing a united front with the two main labor unions that represent workers within the University. The Hermandad de Empleados Exentos No Docentes (HEEND), the union representing maintenance workers on campus, as well as the Association of Puerto Rican University Professors (APPU), have both lent support to the striking students by agreeing not to cross the picket lines. This has come about despite a provocative order given by the interim President for all personnel to return to work. Indeed, support for the striking students is widespread as the UPR is considered a point of pride by many Puerto Ricans. In addition to opposing the planned cuts, the student leadership is demanding reforms to bring greater democratization to decision-making within the university as well as a public audit of the current debt in Puerto Rico to determine what portions could be cancelled on the basis of illegal bond emissions.

The current strike is taking place just 7 years after a series of similar student strikes led to a shut down of the majority of UPR campuses for several months. Just as now, the major issues that led to the students taking radical action were tuition hikes combined with an intensification of the attacks carried out against social programs and labor by the colonial administration. Yet, the imposition of a Fiscal Control Board on Puerto Rico since 2016, which clearly represents the interests of Wall Street, has shifted the focus of the students from the colonial administration to the financial vultures themselves. While it is by no means assured that the current strike will result in a tangible victory for the university students, their direct challenge to the Wall Street has both raised consciousness among the rest of Puerto Rican society and merits respect beyond the colony. Communities ravaged by municipal debt will do well to draw lessons from the struggle currently being led by Puerto Rican university students as their bold step offers the potential for new organizational models of popular resistance to the reactionary social policies being advanced by Wall Street vultures.

By Jhoni Jackson | 3 weeks ago
Seven years after the historic 2010 strikes at the University of Puerto Rico—which resulted in expulsions, arrests, police violence and included a monumental 62-day lock-in at the Río Piedras campus—the island’s primary higher education system is now facing its most significant budget cut ever. Originally proposed at $300 million, amounting to about 20 percent of the operating budget, the reduction was officially upped to $450 million under Governor Ricardo Rosselló’s fiscal plan, which was approved on March 14th by the federally appointed fiscal oversight board, La Junta de Control Fiscal.

El Movimiento Estudantil of today is not unlike its previous incarnations; resistance and protest is effectively ingrained in the University of Puerto Rico’s history. Student movements and manifestations dot its timeline from its earliest days, from pushback against the government’s newfound tightened grip in the early 1900s to intense spikes in the ’60s and early ’70s against militarization through the presence of the United States’ ROTC program. In 1981, a 5-month strike ensued in response to tuition hikes, and in the ’90s and mid-2000s marches and other actions were organized with similar grievances as roots.

“The budget cuts proposed by La Junta aren’t to help Puerto Rican people, they’re to pay off a debt whose origins are unclear, a debt we’re not sure was taken on responsibly,” says Wilmarí De Jesús Álvarez, President of the Consejo General de Estudiantes del Recinto de Río Piedras.


An audit of that $73 billion debt, she says, is absolutely necessary. She’s not alone: Since PROMESA was passed and its federal oversight board instated, groups have mobilized, protested. They argue that the debt is inherently illegal; they publicly resist any measures taken by the government in its efforts to repay bond holders and hedge funds.

The steps students at the University of Puerto Rico will take next are to be decided at a National Assembly on April 5, to be held at the Coliseo Roberto Clemente in San Juan. A second Rio Piedras assembly will be held on March 21 in which students will vote—likely favorably—on whether they’ll join. So far, De Jesús Álvarez says, five of the 11 campuses have already confirmed attendance. A major strike like 2010’s seems like a viable option, but the breadth of the issues presented requires wider solidarity. It’s about social consciousness, De Jesús Álvarez says.

“It’s a general protest,” she adds. “It’s a call for other sectors to wake up to the rights of Puerto Ricans.”

Beyond its educational purpose, the University of Puerto Rico has a social purpose.
Beyond the university budget reduction, Governor Rosselló’s fiscal plan, approved with amendments by La Junta de Control Fiscal, also accounts for a 10 percent reduction in pensions, a decrease in government labor, restructuring government subsidized healthcare (fewer programs and more out-of-pocket costs for patients), the extension of sales tax to Internet sales and other measures for increasing revenue. This comes on the heels of La Reforma Laboral, which greatly reduced benefits for workers who, considering the 12.4 percent unemployment rate, have little freedom to opt out and look for better conditions when their employer implements the downgrades.


A university student protests as riot police stand guard at the main gate of the University of Puerto Rico during a 2010 student strike in San Juan. (AP Photo/Ricardo Arduengo)

Roberto Caez graduated the same year he was expelled for leading a march. Deemed a “danger to the University,” he sued the University, defying the order by continuing to attend classes. He won his case.

De Jesús Álvarez notes that the student population of the University system has changed since then. Fewer remain on campus as often; instead, many leave to work multiple part-time jobs. Bringing those students into the fold, she says, is crucial. And while the process has already begun, there’s still much work to do: Educating, identifying problems, unifying the campuses.

“Beyond its educational purpose, the University of Puerto Rico has a social purpose. It has a responsibility to the country to provide an opportunity for people to develop, to access an education that will improve their quality of life…for social mobility in this country,” she says.

Roberto Caez expresses concern about the development of the students’ opposition strategy.

“At the end, what we have is a big monster, and we can only face it if more people strike.”
“We [had] committees the year before [the strike]. People trained in…developing the organizing skills that a strike would require from people. To handle the press, being able to actually gain support from people…and political thinking. Lobbying, correct strategies for the adversities that they’ll face—that needs training,” he says. “They have 30 people maybe, between 15 and 40, trained in some of these striking skills. They’re not in a bad position, but I’m just comparing, we had more. They are now organizing those committees against the clock because they have the strike maybe on April 5.”

Working with other resistance groups in a way that reflects “what collectively affects us,” De Jesús Álvarez says, will be key. At the February assembly, she points out, education on gender perspectives—Rosselló withdrew its inclusion in Puerto Rican schools earlier in the month—and the treatment and rights of trans students were a major part of the discussion.

Roberto Caez adds, “At the end, what we have is a big monster, and we can only face it if we have a strike in more places. [We need] a process or a climate—a political climate—that can actually face the agenda, because it’s an agenda.”