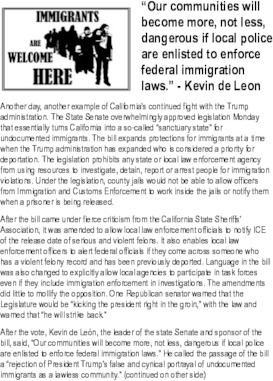 Another day, another example of California’s continued fight with the Trump administration. The State Senate overwhelmingly approved legislation Monday that essentially turns California into a so-called “sanctuary state” for undocumented immigrants. The bill expands protections for immigrants at a time when the Trump administration has expanded who is considered a priority for deportation. The legislation prohibits any state or local law enforcement agency from using resources to investigate, detain, report or arrest people for immigration violations. Under the legislation, county jails would not be able to allow officers from Immigration and Customs Enforcement to work inside the jails or notify them when a prisoner is being released.

After the bill came under fierce criticism from the California State Sheriffs’ Association, it was amended to allow local law enforcement officials to notify ICE of the release date of serious and violent felons. It also enables local law enforcement officers to alert federal officials if they come across someone who has a violent felony record and has been previously deported. Language in the bill was also changed to explicitly allow local agencies to participate in task forces even if they include immigration enforcement in investigations. The amendments did little to mollify the opposition. One Republican senator warned that the Legislature would be “kicking the president right in the groin,” with the law and warned that “he will strike back.”

After the vote, Kevin de León, the leader of the state Senate and sponsor of the bill, said, “Our communities will become more, not less, dangerous if local police are enlisted to enforce federal immigration laws.” He called the passage of the bill a “rejection of President Trump’s false and cynical portrayal of undocumented immigrants as a lawless community.”

Just before the Senate passed the sanctuary state bill, lawmakers approved legislation to start a fund that would pay for lawyers for undocumented immigrants facing deportation. Several Republicans spoke out against the legislation, saying it was an unfair use of taxpayer money and also contradicted the idea that the state wants to stay out of immigration enforcement. Both bills will now move to the Assembly. Gov. Jerry Brown has not indicated whether he would sign either one.

Join the ACLU in the People Power Movement to resist the Trump Administration.
https://www.peoplepower.org

The Justice & Honor for Luis Góngora Pat Coalition is raising funds to support Luis' family in this time of mourning and grief. Luis’ family depended on him financially. Now his brother Jose must support their parents, Luis' family, and his own family. A one year memorial fundraiser will go a long way towards easing the financial strain on a struggling family and help them build a final resting place for Luis' body in
their hometown cemetery in Teabo (Yucatan, Mexico.)

We invite you to donate any amount that is comfortable for you. 20-30% of funds raised will be kept by Luis' family in San Francisco to cover the cost of the one year memorial event (banner, posters, flyers, t-shirt printing, event documentation, etc.)

To learn more about our Coalition efforts to demand justice for Luis' killing and honor his memory, please visit:
http://www.justice4luis.org
https://www.youcaring.com/justice4luis-memorial-fund
https://www.facebook.com/groups/230409604013458/

JOIN CODEPINK, WORLD CAN’T WAIT, OCCUPY SF and others for our PEACE VIGILS, 5:30-6:30 p.m. most Wednesdays at MONTGOMERY & MARKET, SF
Add Your Comments
Support Independent Media
We are 100% volunteer and depend on your participation to sustain our efforts!