by San Jose Stage Company
Cultures collide when Bridget, a young Chicagoan, meets a Lakota Sioux and a fellow American from New Jersey on an army base in Kandahar, Afghanistan. But it isn't long before they discover they have more in common than expected as secrets are revealed that ultimately turns one of them into a whistleblower suspect. Mystical Native American and Irish history blends magic, politics and realism in this suspenseful examination of the 1916 Easter Rising. 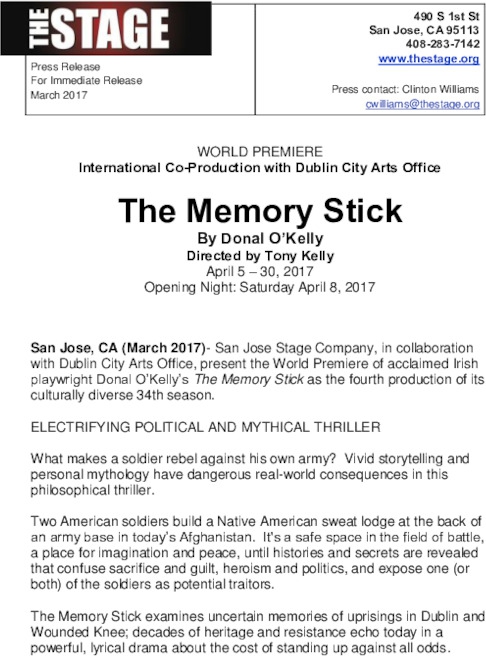 What makes a soldier rebel against his own army? Vivid storytelling and personal mythology have dangerous real-world consequences in this philosophical thriller.

Two American soldiers build a Native American sweat lodge at the back of an army base in today’s Afghanistan. It's a safe space in the field of battle, a place for imagination and peace, until histories and secrets are revealed that confuse sacrifice and guilt, heroism and politics, and expose one (or both) of the soldiers as potential traitors.

The Memory Stick examines uncertain memories of uprisings in Dublin and Wounded Knee; decades of heritage and resistance echo today in a powerful, lyrical drama about the cost of standing up against all odds. About the Playwright:

Donal O’Kelly is an award-winning Irish playwright and actor. He has twice been awarded an Irish Arts Council literature bursary, and in 1999 was awarded the Irish American Cultural Institute Butler Literary Award. He was a founder and director of Calypso Productions, and an associate director of the peace and justice organisation Afri. In 2007 he was elected to Aosdana, an Irish affiliation honouring artists whose work has made an outstanding contribution to the creative arts in Ireland.

Tony Kelly returns to San Jose Stage Company after directing the Regional Premiere of The Night Alive. Beginning his work with The Memory Stick at the Dublin Theatre Festival, developing and directing the staged reading. He has directed multiple productions for San Jose Stage Company including most recently; The Addams Family, Reefer Madness, David Mamet's Race. In 2009, he directed the New York premiere of Colman Domingo's A Boy and His Soul at the Vineyard Theatre, where it won the 2010 Lucille Lortel Award for Outstanding Solo Show in New York City and a GLAAD Media Award for Outstanding Broadway/Off-Broadway production. Founder of Thick Description in San Francisco, he has directed 43 productions over 21 years, including numerous World Premieres; Domingo's A Boy and His Soul, Solis' El Otro and Santos & Santos, Mayer's Joe Louis Blues, Yussef el Guindi's Back of the Throat, and David Conte's operas America Tropical and Firebird Motel.

WHAT: THE MEMORY STICK 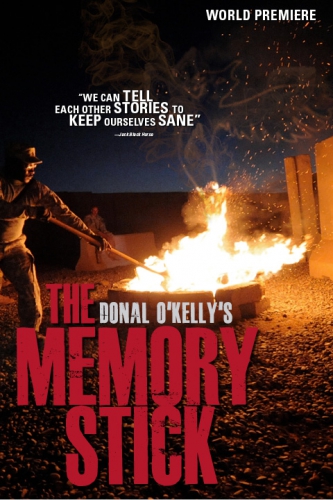 original image (480x720)
END_OF_DOCUMENT_TOKEN_TO_BE_REPLACED
Add Your Comments
Support Independent Media
We are 100% volunteer and depend on your participation to sustain our efforts!