With nearly 20 years of experiences working with MSAs (Muslim Student Associations,) local mosques, Islamic schools, and other faith-based groups in the area, Jenny Yanez has a packed resume of collaborating, organizing, and spreading awareness around matters of faith, community, and social justice.

Ms. Yanez is a radio host and producer for NOLA Matter: Islam in the Crescent City on Thursdays at 5:00 pm on WHIV-LP/102.3FM. She currently serves as the Director of the Introduction to Islam-Islam 101 Program at the Jefferson Muslim Association (JMA), she is a member of Equity New Orleans for the City of New Orleans, and she is an active community organizer and public speaker. 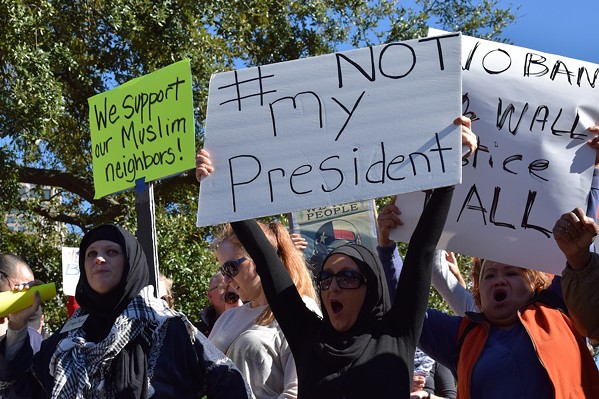 Jenny Yanez (left) at the "No Muslim Ban Rally and March" on January 29, 2017 that she helped organize in direct response to Donald Trump's executive order banning immigration from seven Muslim-majority countries
Add Your Comments
LATEST COMMENTS ABOUT THIS ARTICLE
Listed below are the latest comments about this post.
These comments are submitted anonymously by website visitors.