Add an Event
Newswire
Calendar
Features
Home
Donate
From the Open-Publishing Calendar
From the Open-Publishing Newswire
Indybay Feature
Publish to Newswire
Add an Event
Related Categories: California | Central Valley | Environment & Forest Defense | Government & Elections
Low Numbers of Sacramento and Klamath River Salmon Point to Poor Season
by Dan Bacher
Saturday Mar 4th, 2017 9:39 PM
“The fishery is in a desperate place and should be treated as such,” said Noah Oppenheim, the Executive Director of the Pacific Coast Federation of Fishermen’s Associations (PCFFA), who attended the meeting with over a hundred other fishermen and agency staff. “The situation is clearly the result of poor water management inland by the people representing the state and federal agencies.”

Photo: Nimbus Dam on the American River, a tributary of the Sacramento and major producer of fall run Chinook salmon and steelhead. Photo by Dan Bacher. 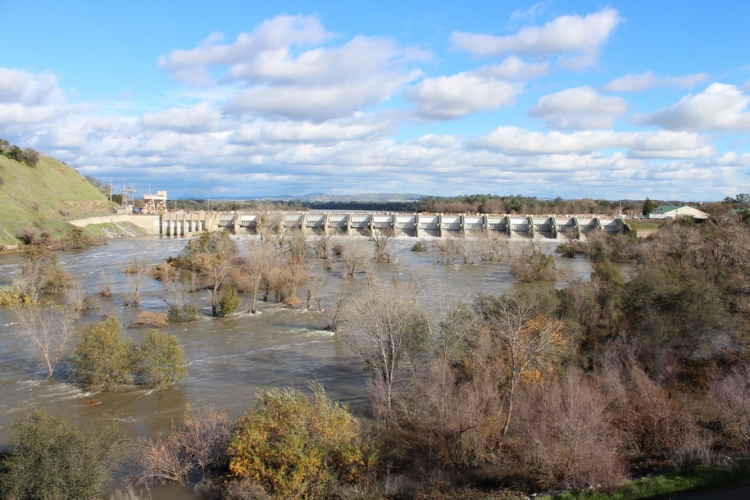 Recreational and commercial fishermen attending the annual salmon fishery information meeting in Santa Rosa on March 1 received grim news from state and federal biologists – they will see reduced salmon fishing opportunities in both the ocean and the Sacramento and Klamath River systems, due to low returns of spawning fish to the rivers last fall.

The pre-season numbers unveiled by Dr. Michael O’Farrell of the National Marine Fisheries Service estimate only 230,700 Sacramento River fall run Chinook adults and 54,200 Klamath River fall run adults will be in the ocean this year.

Biologists noted that both forecasts are lower than those of recent years, with the forecast for Klamath fall run being among the lowest on record. Salmon originating from these river systems typically comprise the majority of salmon caught in the state’s ocean and inland fisheries. Ocean regulatory management for salmon fisheries on the ocean from Cape Falcon in Oregon to the Mexico-US Border is heavily based on these runs.

This abundance forecast is reduced from 2016. It is based on targeting an escapement of at least 122,000 fish, a 47 percent escapement rate, he disclosed.

Management for the winter-run Chinook salmon, an endangered species, will impact the Sacramento River ocean salmon fishery. Remember that this fish was once extremely abundant, with a run of 117,000 fish estimated in 1969.

By 1992, the run had declined to less than 200 fish due to water exports to corporate agribusiness and southern California water agencies and poor management by the state and federal water and fishery agencies.

“The maximum allowable age 3 impact rate is 15.8 percent,” he said. “With the 2016 regulations in place, there is a preliminary prediction of 11.6 percent.”

“The Council took the precautionary approach in 2016,” O’Farrell said. “The winter run is likely to constrain 2017 fisheries south of Point Arena to some degrees, as it did last year.”

The spawning escapement numbers of other Sacramento Chinook stocks were down also. A total of 4,637 late fall adults and 973 jacks, 924 winter adults and 622 jacks, and 7,689 spring adults and 54 jacks returned to the system in 2016.

The Klamath River abundance estimates are even bleaker. The return of only 8,615 three-year-old fall-run Chinook salmon between the Klamath and its largest tributary, the Trinity, was the lowest in 38 years, resulting in drastic cuts in the recreational river fishery and Tribal fishery last year.

The Yurok Tribe last year opted to cancel the commercial fishing season that many Tribal members depend on for income, due to the low numbers of fish. The outlook for this season’s river fisheries is even worse.

This means that regardless if there no fishing at all on the Klamath this season, the run wouldn’t meet the adult fall Chinook natural conservation threshold of 30,909 fish nor the maximum sustainable yield (MSY) of 43,000 spawners.

“The Klamath fall run will heavily constrain 2017 fisheries south of Cape Falcon, Oregon,” summed up O’Farrell. He noted that the Klamath would restrain the fishery progressively less and less as you work your way up and down the coast from the Klamath Management Zone, the area on the ocean centered around the mouth of the Klamath River on the Yurok Reservation.

“With a poor forecast for Klamath fall run and continued concerns over the winter run, California anglers will see reduced Chinook fishing opportunity as compared to last year,” summed up Brett Kormos, a senior environmental scientist with the California Department of Fish and Wildlife (CDFW), who moderated the meeting.

A news release from the CDFW noted that Chinook that will be harvested in ocean fisheries in 2017 hatched two to four years ago, and “were deeply affected by poor river conditions driven by California’s recent drought.”

“CDFW and federal fish agency partners have expended millions of dollars on measures to minimize the impacts of the drought. These efforts have included trucking the majority of hatchery salmon smolts to acclimation pens in the lower Delta, improving hatchery infrastructure to keep juvenile fish alive under poor water quality conditions and partnering with sport and commercial fishermen to increase smolt survival. Though all of these efforts helped, other environmental factors – such as unusually warm water conditions in the ocean – were beyond human control,” according to the agency.

Some fishery group representatives disagreed, pointing out the failure of management by the state and federal agencies.

“The fishery is in a desperate place and should be treated as such,” said Noah Oppenheim, the Executive Director of the Pacific Coast Federation of Fishermen’s Associations (PCFFA), who attended the meeting with over a hundred other fishermen and agency staff. “The situation is clearly the result of poor water management inland by the people representing the state and federal agencies.”

“There are plenty of hard working fishermen and women who are going to see yet another disastrous season. Fishermen can only take so much before we have to demand real change and not just platitudes from the water users. Salmon are the original water users and it’s high time that West Coast water policy takes them into account,” he emphasized.

Commercial and recreational fishermen made recommendations on the seasons, as they normally do at the meeting every year.

“We need to keep the minimum length at 24 inches – one of the drawbacks to going up to 26 inches is that you see increased fish mortality,” said Roger Thomas, skipper of the Salty Lady sportfishing boat, and Board Chairman of the Golden Gate Salmon Association (GGSA).

After the meeting, Rick Powers, owner of the Bodega Bay Sportfishing Center, said, “There are definitely some serious problems with the fishery. I’m hoping that feds will craft a season that will give everybody an opportunity.”

Dick Pool, Administrator of water4fish.org, emphasized, "2016 was a record low year for many salmon runs and fish harvest. It is urgent that the fish and water agencies accelerate the activity dealing with water flow, habitat and predation in order to begin to turn the situation around."

The 2017 forecasts, in addition to information on endangered Sacramento River winter Chinook, will be used over the next two months by state and fishery managers to set recreational and commercial fishing season dates, commercial quotas, and size and bag limits

The Pacific Fishery Management Council and California Fish and Game Commission Season dates and other regulations will be developed over the next two months. For more information on the salmon season setting process or general ocean salmon fishing information, please visit the Ocean Salmon Project website at: http://www.wildlife.ca.gov/fishing/ocean/%20regulations/salmon or call the salmon fishing hotline at (707) 576-3429.

Meanwhile, Governor Jerry Brown is promoting the Delta Tunnels, designed to export water to corporate agribusiness, the Metropolitan Water District of Southern California and the oil industry for fracking and other extreme oil extraction methods. The two massive tunnels under the Delta would hasten the extinction of winter-run Chinook salmon, Central Valley steelhead, Delta and longfin smelt and green sturgeon, as well as imperil the salmon and steelhead populations on the Trinity and Klamath rivers.

In some good news for the future of the fishery amidst this year’s dismal salmon outlook, the Hoopa Valley Tribe, Yurok Tribe, Pacific Coast Federation of Fishermen’s Associations (PCFFA), Institute for Fisheries Resources, and the Klamath Riverkeeper won two major lawsuits over the past month.

On February 8, a U.S. District Court judge ordered federal agencies to immediately take steps to protect juvenile coho salmon after several years of deadly disease outbreaks in the Klamath River. Klamath River coho salmon are listed as threatened species under the federal Endangered Species Act. Salmon are central to the cultural identity and survival of Tribes along the river. The Klamath is also California's second biggest salmon producer for the commercial and recreational fishing industries.

The Hoopa Valley Tribe, who initiated the lawsuit, welcomed the decision challenging the government’s inaction given two years of high disease rates and poor adult salmon returns. The Tribe’s reservation is located on the Trinity, the main tributary of the Klamath River.

“The Hoopa Valley Tribe depends on salmon for our livelihood and will not stand idle while our people’s culture is jeopardizes,” said Ryan Jackson, Chairman of the Hoopa Valley Tribe. “This decision is a win for the Tribe and all communities that depend on Klamath salmon.”

In his ruling, Judge Orrick directed the Bureau of Reclamation to implement flow measures that were developed by the Tribe and supported by the best available science, according to Jackson. These include having more frequent peak flows and higher spring flows that are the components of a more natural hydrology for the Klamath River.

“This ruling will give the Klamath salmon a fighting chance until we can get the lower four dams out,” said Thomas P. O’Rourke Sr, Chairman of the Yurok Tribe. “Untold numbers of juvenile salmon died from this disease in 2014, 2015, and 2016, and this judgment will help us to protect fish stocks from another serious outbreak. The Court recognized that scientifically supported decisions in favor of fish are not only legally required, but that the tribes should have a primary role in working with the government in reaching those decisions.”

Then on February 20, the U.S. Circuit Court of Appeals for the Ninth Circuit broadly upheld the U.S. Bureau of Reclamation’s ability to provide additional flow releases in California’s Trinity River to protect salmon. The agribusiness-dominated San Luis & Delta-Mendota Water Authority and Westlands Water District sued the Bureau, which controls water releases both from Trinity Reservoir to the Trinity River and to the Lower Klamath River in Oregon.

"Commercial fishermen, Tribes and communities rely on healthy rivers and healthy salmon populations,” said Earthjustice attorney Jan Hasselman, who represented the Pacific Coast Federation of Fishermen’s Associations. “We welcome the court’s strong opinion upholding the Bureau’s ability to protect these resources and we hope this will put an end to Big Ag’s long-running and misguided water grab.”
Add Your Comments
LATEST COMMENTS ABOUT THIS ARTICLE
Listed below are the latest comments about this post.
These comments are submitted anonymously by website visitors.