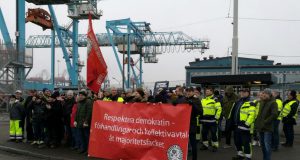 The Spanish government using the union busting policies of the EC is deregulating the work of dockers or wharfs and want to destroy their unions. It will also destroy health and safety for these workers as they are made independent contractors. This international day of action in solidarity with them is critical to put the heat on the Spanish government.
https://www.transportworkers.org/node/2751
Add Your Comments
LATEST COMMENTS ABOUT THIS ARTICLE
Listed below are the latest comments about this post.
These comments are submitted anonymously by website visitors.