The city of Anaheim in Southern California erupted on February 22 after an off-duty police officer detained a 13 year old male, dragging him by the collar across a yard, and attempted to pull him over hedges in front of the police officer’s home before pulling out a gun and firing it into a crowd of young people, luckily injuring no one. 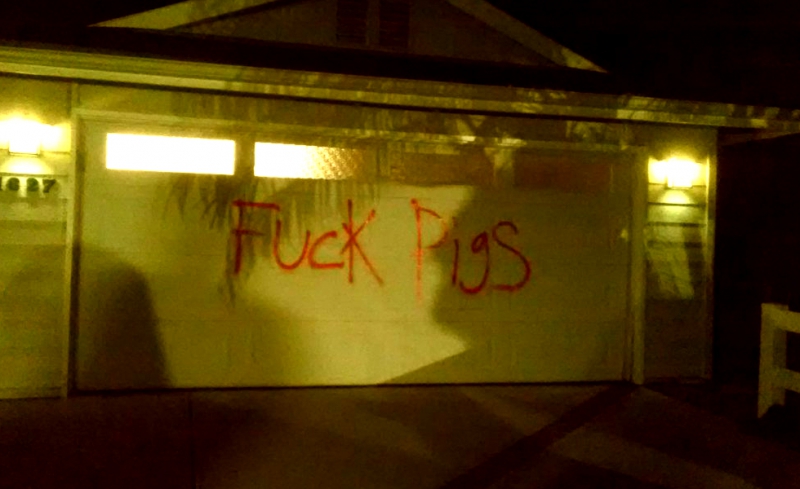 Christian Dorscht’s father, Johnny Dorscht, told the Orange County Weekly his son was coming to the defense of a girl who had been verbally attacked by the off-duty cop. He told the OC Weekly his son said the officer called the girl a “c*nt” for stepping on his grass.

The officer then grabs Christian by the shirt and pulls him onto the lawn, as Christian says, “let me go, for the last time.” Several students wearing backpacks can be seen on the lawn following the incident.

“He tried to hit me in my nuts. That’s like a little pussy move, punch a kid in the nuts,” Christian says. He then tells the officer his hand is red and his neck is scratched while asking him to let him go.

The officer tells Christian, “your hand is all red because you’ve been resisting me this whole time.”

According to the police officer, the young man he was grabbing by the collar said he would “shoot” him. Witnesses dispute this, saying that the young man simply said he was going to “sue” the off-duty officer. After pulling the much smaller youth across the yard, the police officer then reached into his waistband and drew a gun, firing at the youth who was surrounded by several other young people, all standing up for their friend. As Buzzfeed wrote:

The officer, who is wearing dark sunglasses, jeans, and an unbuttoned blue shirt, then pulls out a handgun from his waistband. The officer is seen struggling with one of the teenagers, trying to drag him out of the bushes while holding a gun with one of his hands when a shot rings out.

Soon after the shooting happened, a crowd gathered outside of the officer’s home, which was vandalized with “FUCK PIGS” in spray paint, as youth pushed back against “organizers” which tried to keep the crowd passive even though they had just witnessed their friends and family members almost being killed for the crime of walking across a yard. The crowd then took to the streets while riot police were stationed around the home in order to protect the officer who was inside.

The shooting illustrates the extreme nature of how the government protects at all costs police who carry out horrific acts of violence and terror on a daily basis. How many times have we heard the police excuse the murder or shooting of someone, by claiming that they were afraid of someone with a ‘gun in their waistband,’ which turns out to be in fact total bullshit? In this case, the officer actually had a gun in his waistband and by pulling it out and firing it, he endangered a whole group of young people. As is standard, after the shooting the officer was placed on administrative paid leave while other police investigate the shooting. Sadly, two young people at the scene of the incident were arrested by the police, which illustrates how this government protects a police officer that tries to kill children, and arrests those children who were almost hit by police bullets. Disgusting.

According to KilledByPolice.Net, 193 people have been killed by US law enforcement since the start of 2017, which is an average of over 3 people per day being killed by police. At the same time, the Trump administration has played up lies that police are under fire from both social movements, crime, and anti-police forces, and has offered cops carte blanche to kill, injure, repress, and attack communities of color, the poor, and social movements.

The fight by the youth of Anaheim is everyone’s fight. Against the police, the system of power and exploitation they protect, and also against the organizations which seek to squash, control, and hinder the ability of the people to fight back against a system which would shoot them for walking across a police officer’s lawn.

The fires of Ferguson and Baltimore are still lit. 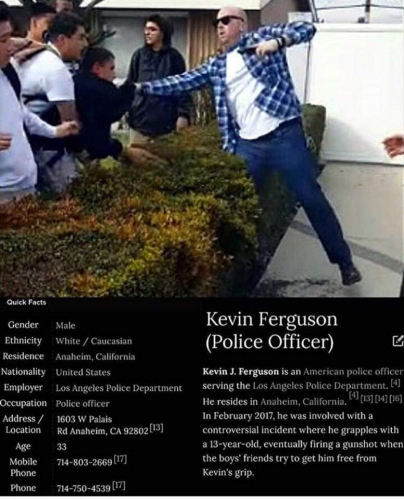 original image (776x960)
Contact Kevin Ferguson. The pig thinks it's cool to pull a gun and shoot at kids.

https://www.everipedia.com/kevin-j-ferguson-police-officer/
Add a Comment
§Kevin James Ferguson is the pig who shot at kids in Anaheim
by Lawn Enforcement
Friday Feb 24th, 2017 5:56 PM 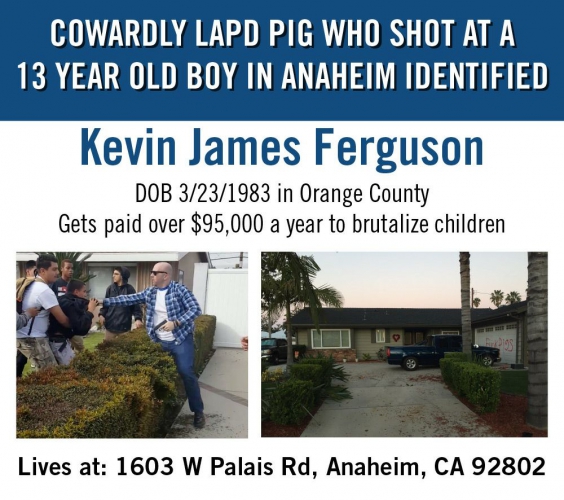 original image (1000x886)
https://www.everipedia.com/kevin-j-ferguson-police-officer/
Add a Comment
Support Independent Media
We are 100% volunteer and depend on your participation to sustain our efforts!