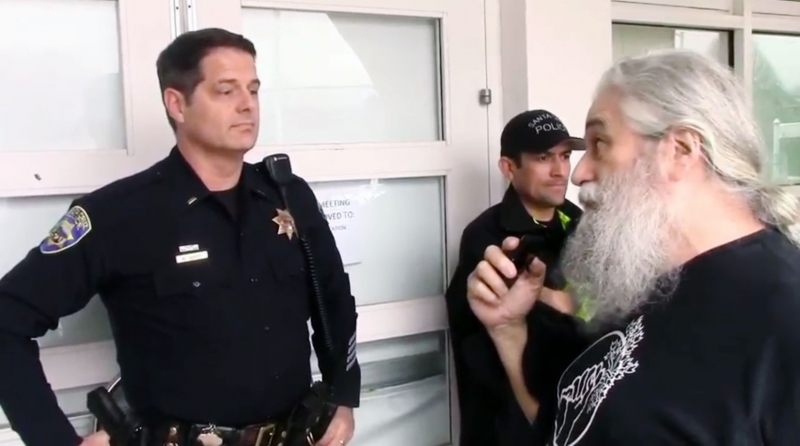 Wes White came over from Salinas to film the two press conferences (by D.A. Jeff Rosell and Police Chief Kevin Vogel). He was admitted to the D.A.'s conference, but subsequently denied entrance to the second held at the Police Department's "Community Room".

The video and audio shown by police give no clear picture of Sean Arlt's approach to the four police officers. There was no offer to release the D.A.'s investigation or the original police reports.

The few media present at Vogel's press conference asked very few questions. That section of the video (shown at the closed Press Conference) and subsequently posted on the SCPD's website and Santa Cruz Indymedia) can be seen at https://www.indybay.org/newsitems/2017/02/16/18796574.php?show_comments=1#18796590. Questions begin 57 minutes into the audio file and some are unintelligible. It is unclear which media were allowed into the room.

Wes White is a video-journalist, recent candidate for Salinas City Council, and co-founder of the Monterey County/Salinas Union of the Homeless. His video of the SCPD Press Exclusion is at
https://youtu.be/ZGnW82WWpww

Norse's audio of the D.A.'s press conference plus some commentary is at http://radiolibre.org/brb/brb170216.mp3 (15 minutes into the file).

Commentary outside the SCPD Press Conference which he was excluded from is at http://radiolibre.org/brb/brb170216.mp3 (1 hour and 4 minutes into the file).
Add Your Comments

CNN and other news outlets were blocked on Friday from attending an off-camera White House press briefing that other reporters were hand-picked to attend, raising alarm among media organizations and First Amendment watchdogs.

http://money.cnn.com/2017/02/24/media/cnn-blocked-white-house-gaggle/index.html
Add a Comment
§Misconceptions
by Media
Saturday Feb 25th, 2017 5:13 AM
There seems to be a misconception that the media enjoys some sort of special access rights. It doesn't. It has the same right of access any other citizen does. No more, no less.

Another misconception is that every media outlet has an automatic right to attend a press conference or other newsworthy event. Wrong again. For a variety of reasons, pool coverage may be required. An example of this are high-profile trials.
Add a Comment
§Law & Order Anarchist Intent
by Goat
Saturday Feb 25th, 2017 11:02 AM
Police protect and serve ONLY corporate interests, and they are trained to kill, AND are rewarded with paid administrative leave. I have witnessed their brutality on many occasions. We must organize. Push back against tyranny. A metal rake? What next? "He was coming at me with a cereal spoon!" Gag me.
Add a Comment
Support Independent Media
We are 100% volunteer and depend on your participation to sustain our efforts!