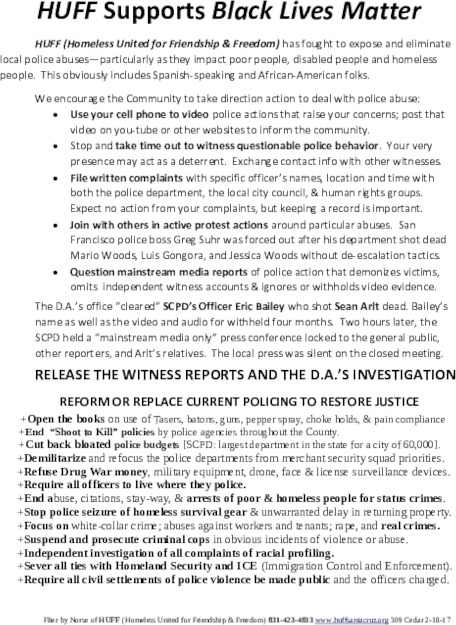 Download PDF (509.1KB)
It was encouraging to see so many new faces there--new to me, anyway. Some told me they had on entered or reentered the activist arena after the election of Trump and the recent refugee and traveler bans.

Other than an inquiry from a Capitola cop who drove up in a car to on my arrival to ask if I were responsible for the protest (which I wasn't), no police showed up except in passing patrol cars.
Regular honks from other cars and trucks seemed to indicate strong sympathy.

With few exceptions the men present were there with their families. The overwhelming majority of those gathered were women. Virtually all participants were "white". It was an enthusiastic and friendly group. I arrived around 10 AM when there were only a handful of people, and left around 11:30 when the protest had grown and was still going strong.

I distributed the attached flyer, and interviewed a number of the folks holding Black Lives Matter signs.

The interviews will be played tomorrow on Free Radio (streams currently at http://www.freakradio.org and archives at http://radiolibre.org/brb/brb170219.mp3 (about an hour into the audio file).
§Clarifying...
by Robert Norse Sunday Feb 19th, 2017 8:16 AM
The HUFF flyer above reflects my views and likely some of those protesting unrestrained police practices across the country at the BLM protest, however it was not created by the organizers of that protest and does not represent either their official position or a consensus of their views.
Add Your Comments
LATEST COMMENTS ABOUT THIS ARTICLE
Listed below are the latest comments about this post.
These comments are submitted anonymously by website visitors.