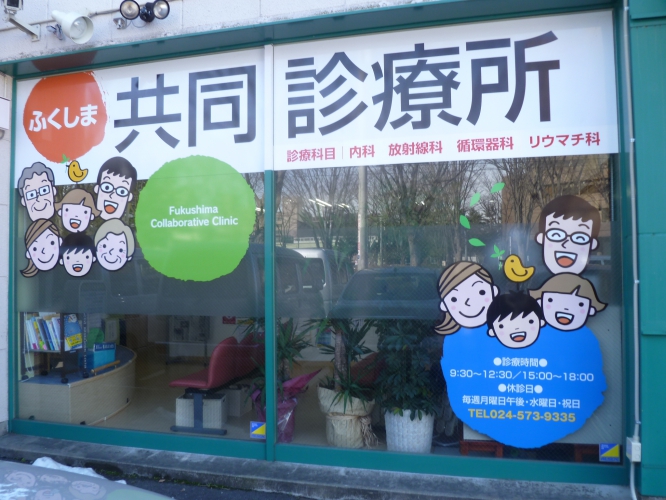 original image (2048x1536)
The Fukushima families and children have had to rely on independent community clinics to tell them the truth about what they are facing.
Japan Fukushima Community Clinic-Let Fukushima Children Have a Future
https://www.clinic-fukushima.jp/english/


We have to protect children from radiation. Setting up clinics in Fukushima is crucial for children to survive.

The accident of Fukushima nuclear plants spread tremendous amount of caesium out to the air whichwas equivalent to 168 times the caesium released by the atomic bomb dropped on Hiroshima in 1945. The damage caused by this accident could far exceed the severity of the Chernobyl accident.
120,000 people were forced to evacuate from their home town, and 60,000 left their home by their own decision even though they would lose all of the provisions of their lives.
In reality, there are still 360,000 children in Fukushima Prefecture who have remained behind, and 75% of the lands upon which these children run and play every day have been identified as having heavy contamination of radiation.
They also found caesium in the urine of children who evacuated urgently at the time of the crisis.
Radiation contamination can cause serious disease. Children therefore should be removed from the area immediately.
However, in reality, there are many people who cannot afford moving out of their homes without financial help or governmental assistance, and they have demanded help from the government. The government does not show willingness to help. Moreover, the special advisor for health care of victims who was hired by the prefectural government has tried to convince people that the contamination level was still very safe, and has falsified the scale of the disaster as small as possible by hiding the sickness of the children.
A mother’s group from Fukushima has been sitting in occupation tents at different ministries offices in Tokyo, and calling for the government to protect their children’s future. This was the beginning of this movement, and it inspired 60,000 people to join the demonstration against nuclear plants in Tokyo on September 19, 2011. It is now spreading over many different places in the world.
Reliable clinics are urgently wanted in Fukushima!
Scoring the surface of the contaminated soil is not enough to secure their safety, and the children have been continuously contaminated every day for a year by now. There is anxiety that some children starting to show symptoms of sickness. Many mothers are wondering whether their children’s symptoms are caused of the radiation, but cannot find trustworthy doctors who will truly listens to the concern of the victims. It is a crucial issue in Fukushima that there are no doctors whom people rely on. Most doctors in general hospitals and clinics in cities refuse to admit, and even doubt, that there is a correlation between these symptoms of sickness and radiation in any cases. In the case of Chernobyl, there are reports of thyroid-related disease, hormonal disorder, anemia, headache, heart-related disease, lung conditions, low immune system and cancers.
Hiroshima victims of the atomic bomb obtained peace of minds because of a clinic they could rely on, but they had to set it up by themselves. They also spent tremendous effort to fight against the Japanese government over injustice in treatments.
Koyo Clinic in Hiroshima-city is an excellent model of this type of clinic. In 1970’s, leukemia was found among the second generation of the atomic bomb victims. Those people who suffered leukemia could not find a doctor who would admit the correlation between their leukemia and the radiation and give special treatments. They therefore had to set up a clinic themselves and found a doctor who was willing to fight against the government. Kenzabro Oue praised the clinic and said “ It was the integration of education and people’s commitment”
Children in Fukushima urgently need to set up clinics so that they can invite doctors willing to work with this issue from different places outside of Fukushima.
You can help Fukushima children by setting up clinics that they can rely on

http://nonukesaction.wordpress.com/
Add Your Comments
LATEST COMMENTS ABOUT THIS ARTICLE
Listed below are the latest comments about this post.
These comments are submitted anonymously by website visitors.