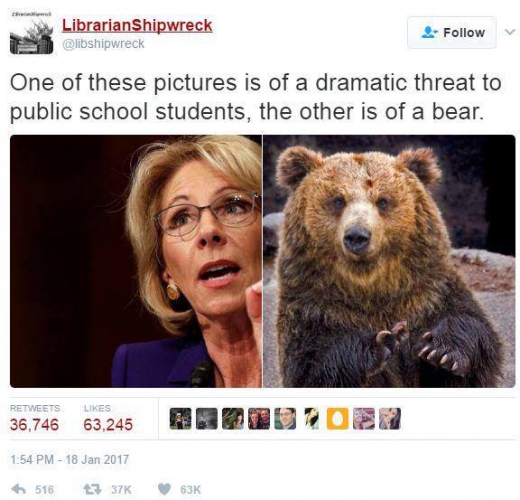 Bay Area families and teachers are gathering on Tuesday, January 31st to oppose the confirmation of Betsy DeVos as the Secretary of Education. During her confirmation hearing, DeVos revealed her extreme lack of knowledge about public education, saying students and teachers should be armed against bears. She's also a multi-billionaire with many financial conflicts of interest.

DeVos’ policy of moving public funding into private schools and charter corporations has led to the destruction of public education in Michigan and will now hurt schools nationwide. It's not the grizzly bears we should be worried about when it comes to our schools and children; it's the corporate interest and disregard for public education that DeVos represents!

Join us alongside three hundred cities across the country to oppose this terrible Trump nomination. And BYOB: pls bring your own bears (your kids' favorite teddy bears, that last year's Halloween costume, old Cal gears, be creative)! We'll line up them up, visualizing our resistance to DeVos' hundred conflicts of interest.

11am set up starts and then press conference at 12pm.

#ResistTrumpTuesdays
END_OF_DOCUMENT_TOKEN_TO_BE_REPLACED
Added to the calendar on Mon, Jan 30, 2017 1:38PM
Add Your Comments
Support Independent Media
We are 100% volunteer and depend on your participation to sustain our efforts!