Dispatches from the War Zone - Presentation 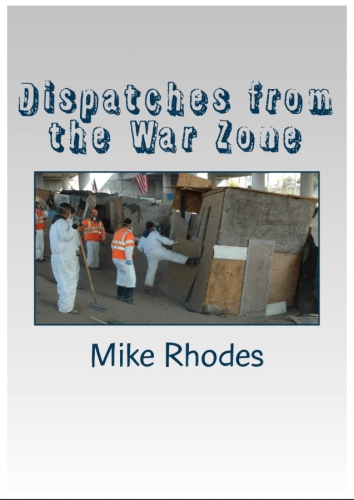 Import event into your personal calendar
Date:
Saturday, February 04, 2017
Time:
9:00 AM - 10:30 AM
Event Type:
Speaker
Organizer/Author:
Mike Rhodes
Email:
mikerhodes [at] comcast.net
Phone:
5599784502
Location Details:
Denny’s restaurant at Blackstone and Divisadero in Fresno.
The next book reading/presentation about Dispatches from the War Zone will be on Saturday, February 4, 2017 at 9 a.m. This event will take place at the Kennedy Club in Fresno at the Denny’s restaurant at Blackstone and Divisadero.

About the author and book:

Mike Rhodes is the author of Dispatches from the War Zone, homelessness in Fresno from 2002 – 2015. His extensive coverage of this issue, as editor of the Community Alliance newspaper, defended homeless people’s human rights and led to significant changes in public policy.

Rhodes was a key organizer in a 2006 class action lawsuit by the homeless against the City of Fresno. The $2.3 million settlement forced the city to stop bulldozing homeless encampments and compensated the homeless for their losses.

The ongoing coverage has exposed public corruption, identified the homeless issue as a vital concern in the community and highlighted alternative projects that provide the homeless with the dignity and respect they deserve.

END_OF_DOCUMENT_TOKEN_TO_BE_REPLACED
Added to the calendar on Mon, Jan 30, 2017 1:08PM
Add Your Comments
Support Independent Media
We are 100% volunteer and depend on your participation to sustain our efforts!