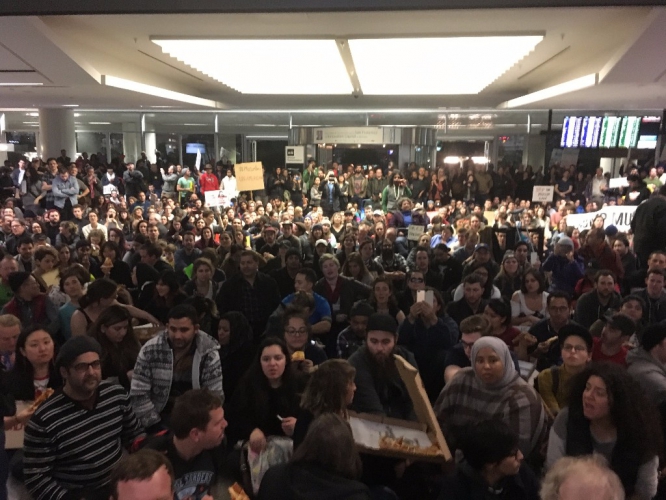 On Saturday we illustrated self-determination: self defense, protection, resistance, rigor and reliance on one another rather than fear, retraction or reliance on law enforcement. Despite showing up in the thousands all day and night at SFO International Airport, alongside communities all across the US, to demand our communities in detention be released and have access to legal counsel, we still are uncertain about the status of most. And we know that more travelers vulnerable to this same anti immigrant attack are en route.

Public officials from across California have expressed a commitment to resisting Trump. We demand that they do more; that they act on that commitment. Not one person should be put in or remain in detention. And our decision makers should make sure of that. We call on them to take every action to intervene, disrupt and resist the attempts to enforce Trump’s white supremacist agenda in San Francisco. Similarly, we call on our allies, workers, and community to continue to join us in resistance.

The fight is not over. With SF still detaining Arab and Muslim immigrants, we must come out harder and stronger to show that we will not stand down until everyone is released and allowed to move wherever they choose. And we will continue to make sure that sanctuary means protection, defense and action for all those attacked by this administration.

We are calling on people from across the Bay Area and everywhere to:

Converge on SFO Airport’s International Terminal to shut it down at 12pm today, Sunday January 29th.

Call and tweet your local public officials, in addition to the following offices, to demand non-compliance with and action against the executive order.

Please make these points in your email or phone call:

We urge you to not only say you refuse compliance with the ban on refugees in a stand against racism, xenophobia and Islamophobia, but to exert your authority to act on it.

As elected officials of San Francisco, a sanctuary city, it is your responsibility to ensure that it remains and acts as a sanctuary. We urge you to come down to SFO and demand that CBP release all people being detained.

We, in the San Francisco Bay Area will fight to remain a sanctuary city and will not allow people to be racially profiled based on national origin. We have no tolerance for racism, xenophobia or Islamophobia.

We know that this family, like many people, are fleeing for their lives in large part because of US policy and military action in their countries of origin. Turning them away, could mean a death sentence.

Sign up for a rapid response text alert system at http://bayresistance.org/

Thank you for taking these actions in defense of one another.

The Arab Resource and Organizing Center
Add Your Comments
Support Independent Media
We are 100% volunteer and depend on your participation to sustain our efforts!