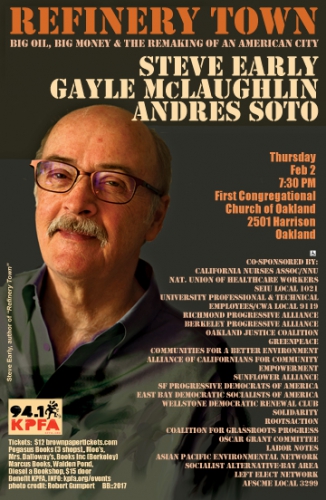 Labor Activist Steve Early documents how a largely non-white working class community of 110,000 people spawned a vibrant culture of resistance to corporate power after more than a century of political dominance by the Chevron Corporation. Richmond, California - long a proto-typical company town with one of the highest homicide rates per capita in the country, with poverty, joblessness, drug trafficking, street crime, gang violence and wild corruption in City Hall resulting in mismanagement and near bankruptcy - transformed itself over a decade into a progressive city via multi-faceted municipal reforms. These were led by labor and community activists, environmental justice campaigners, police reformers, and gay rights activists who formed the Richmond Progressive Alliance.

"As Washington remains in gridlock, the everyday citizen-heroes of Richmond, California, have been getting things done to make their city work for all. Refinery Town is essential reading for anyone seeking inspiration for what grassroots organizing can accomplish, one community at a time." - Robert Reich

STEVE EARLY has been an organizer, lawyer, author, union representative, and labor activist for the past forty-five years.

GAYLE McLAUGHLIN, former mayor of Richmond, Ca., has served as the first corporate-free progressive officeholder on the Richmond City Council.

ANDRES SOTO has been long an organizer with Communities for a Better Environment.

$12 advance, $15 door.
END_OF_DOCUMENT_TOKEN_TO_BE_REPLACED
Add Your Comments
Support Independent Media
We are 100% volunteer and depend on your participation to sustain our efforts!