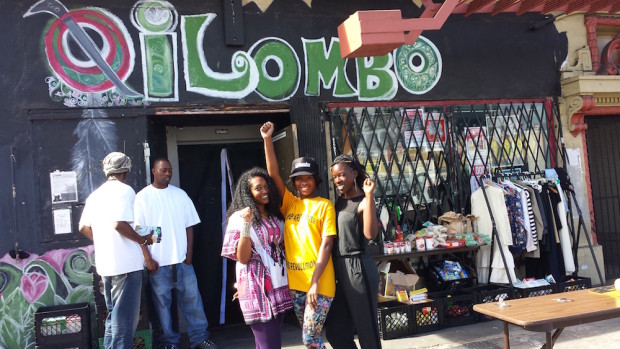 Qilombo, a radical community social center in the heart of West Oakland’s Afrikatown, is one of the latest spaces to be impacted by the rise of code enforcement complaints, which has threatened to board up its services.

According to Qilombo’s organizers, the property’s management company—SCM East Bay—had renewed their monthly lease but reversed its decision a few days after the Ghost Ship fire.

The center then had a surprise inspection last week that resulted in a “cease and desist” order for all public events.

The move is a renewed attempt by SMC East Bay to remove the community center from the property, a battle that Qilombo has dealt with in the past, said Van Dell, Qilombo’s operations manager.

“We don’t see the relationship between not being allowed to host unpermitted public events and not being able to be a leaseholder,” Dell told the Post.

Furthermore, by Wednesday the city had not told Qilombo members any details about what changes should be made to bring the community center’s space up to code.

This kind of disregard by city officials is one of the reasons people living and working in unsafe conditions are fearful to come out and ask for safety inspections, said Dell.

“If the steps taken by the city had anything to do with our safety, the result would have been to give us some time to fix these things while holding landlords accountable to making these repairs, not a permanent cease and desist order,” she said.

“Instead, it makes us more vulnerable and disposable as we deal with gentrification and then landlords get to reap the benefits.”

Qilombo is a community space that provides important services to people along the San Pablo Avenue corridor, including a needle exchange, free meals, a community garden and African cultural classes.

According to Chaga Kwa Nia, a main organizer at Qilombo, the community center is vital for residents he says the city has given up on.

“We provide those services for folks who are Black and Indigenous, and elderly people who are sick and going through mental illness and drug issues,” Kwa Nia said.

SMC East Bay, the building’s property manager and the building inspector did not return the Post’s calls for comments.
http://postnewsgroup.com/blog/2016/12/23/w...
Add Your Comments
Support Independent Media
We are 100% volunteer and depend on your participation to sustain our efforts!