NO! To a Fascist America. Stop the Trump/Pence Regime Before it Starts 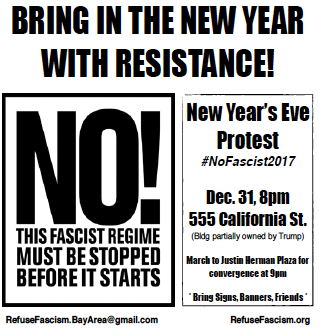 Donald Trump, the President-elect, is assembling a regime of grave danger. Millions of people in the US and around the world are filled with deep anxiety, fear, and disgust. Our anguish is right and just. Our anger must now become massive resistance - before Donald Trump is inaugurated and has the full reins of power in his hands.

WE CAN STOP THE TRUMP/PENCE REGIME BEFORE IT STARTS:
Imagine if people, in the tens of millions, filled the streets, powerfully declaring that this regime is illegitimate and demanding that it not be allowed to rule! The whole political landscape would be dramatically transformed, every faction within the established power structure would be forced to respond-and all this could well lead to a situation in which this fascist regime is actually prevented from ruling. This is not some idle dream but something which could be made a reality if all those who hate what is represented by this fascist regime translate their outrage into firm determination and massive mobilization to create the conditions which make this possible. Read THE PLAN. Read, sign and spread the Call: In the Name of Humanity, We Refuse to Accept a Fascist America. Go to refusefascism.org

Come to the emergency meeting to begin to mobilize millions -
bring your ideas, your passion, your friends.
http://www.revolutionbooks.org/2016/12/mas...


END_OF_DOCUMENT_TOKEN_TO_BE_REPLACED
Added to the calendar on Mon, Dec 26, 2016 8:46AM
Add Your Comments
Support Independent Media
We are 100% volunteer and depend on your participation to sustain our efforts!