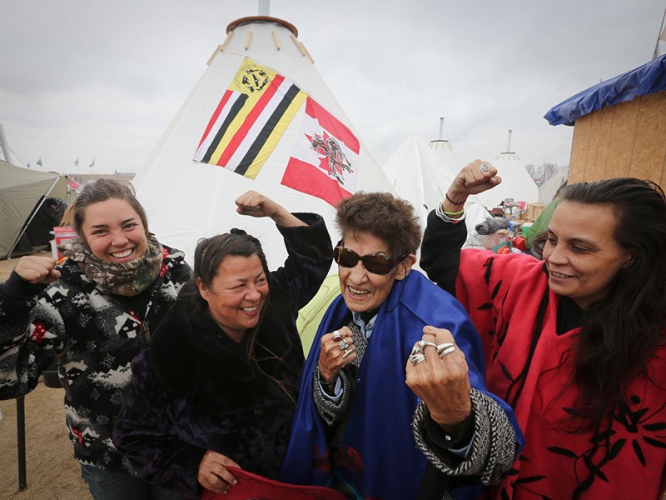 original image (800x600)
Standing Rock, December 4, 2016 — Today, the U.S. Army Corps of Engineers announced that it would not be granting an easement under Lake Oahe for the Dakota Access pipeline to cross the Missouri River a half mile upstream of the Standing Rock Sioux Tribe reservation. The Corps further stated that it plans to prepare an Environmental Impact Statement for alternative routes. These actions trigger a new round of public involvement processes to permit the final piece of the pipeline as required by the National Environmental Policy Act. The decision is major victory for the Standing Rock Sioux Tribe and all who stood in solidarity over the last few months.

The Standing Rock Sioux Tribe, represented by Earthjustice, brought a lawsuit against the Corps for its approvals for the pipeline in July of this year. The lawsuit claimed that the Corps violated multiple environmental and historic preservation statutes, focusing on the decision to reroute the pipeline from Bismarck, North Dakota to the doorstep of the Standing Rock reservation without an adequate environmental analysis and consultation. At various times, pipeline construction has been subject to court injunctions due to the litigation.

The Corps granted permits for the pipeline in July 2016 under a highly streamlined approval process known as Nationwide Permitting. The process circumvents any kind of close environmental review and public process. The Lake Oahe crossing requires an additional approval—known as an easement—because it crosses federally owned land on either side of the Missouri River. It was this easement that the government confirmed would not be granted.

“We wholeheartedly support the decision of the administration and commend with the utmost gratitude the courage it took on the part of President Obama, the Army Corps, the Department of Justice and the Department of the Interior to take steps to correct the course of history and to do the right thing.

“We want to thank everyone who played a role in advocating for this cause. We thank the tribal youth who initiated this movement. We thank the millions of people around the globe who expressed support for our cause. We thank the thousands of people who came to the camps to support us, and the tens of thousands who donated time, talent, and money to our efforts to stand against this pipeline in the name of protecting our water. We especially thank all of the other tribal nations and jurisdictions who stood in solidarity with us, and we stand ready to stand with you if and when your people are in need.

“With this decision we look forward to being able to return home and spend the winter with our families and loved ones, many of whom have sacrificed as well. We look forward to celebrating in wopila, in thanks, in the coming days.”

Statement from Jan Hasselman, Earthjustice attorney who represented the Standing Rock Sioux Tribe in their lawsuit:

“Today is a historic day both for the Standing Rock Sioux Tribe and for indigenous people everywhere. This pipeline never should have been routed near these sacred lands in the first place, and it absolutely never should have received permits without a thorough and meaningful discussion of the risks and benefits to affected Indian Tribes. The announcement that a full environmental impact statement will be prepared is a huge step towards rational decision-making for a project of this magnitude.


Photo: Taylor Peterson, Katherine Morrisseau, Nancy Scanie, and Fawn Youngbear-Tibbetts. Clan Grandmother Nancy Scanie from Cold Lake Dene First Nation in Alberta Canada represents the Athabasca Keepers of the Water. "We especially thank all of the other tribal nations and jurisdictions who stood in solidarity with us, and we stand ready to stand with you if and when your people are in need,” said Standing Rock Sioux Tribe Chairman Dave Archambault II. (Credit: JOEY PODLUBNY / CC BY-NC 2.0)
Add Your Comments
LATEST COMMENTS ABOUT THIS ARTICLE
Listed below are the latest comments about this post.
These comments are submitted anonymously by website visitors.