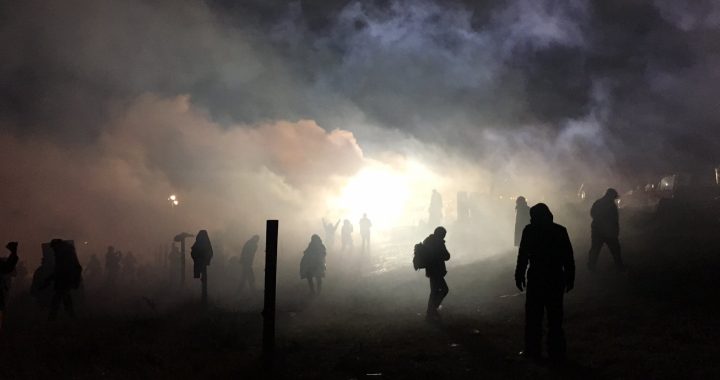 Last night, WPLC attorney Angela Bibens described the horrifying scene: “[Law enforcement] deployed 20 mace canisters in a small area in less than five minutes, to the point where people have lost bowel function. At least one seizure has been witnessed at the front lines by our legal observation team. There have been people vomiting from the exposure to the mace. The water cannon has been mixed with the mace, and so even our legal observers have been exposed and are trying to deal with that while they’re doing up their notes. And canisters were shot at the medic area at the front line. There is at least one woman who has a broken kneecap. At least one elder went into cardiac arrest and was revived through CPR at the front line by medics.”

The attack began around 6 PM yesterday, while Water Protectors attempted to peacefully remove two military vehicles that had been blocking Highway 1806 since October 27, ironically, in an effort to clear the path providing the most direct route from the Oceti Sakowin camp to Bismarck, ND, for emergency services vehicles. The Morton County Sheriff’s Department made unfounded claims of “very aggressive” behavior and an “ongoing riot” by Water Protectors, and falsely claimed that the water cannons were deployed in response to fires set by Water Protectors on Highway 1806.

Concerned members of the public are strongly encouraged to call local and federal agencies to demand (1) immediate end to the construction of the $3.8 billion Dakota Access Pipeline, (2) a full investigation into abuses by law enforcement, and (3) dropping the felony charges against Water Protectors arising from the October 27 police raid on the camp.

Donations to support the Water Protector Legal Collective may be made at fundrazr.com/campaigns/11B5z8 or nlg.org/donate/waterprotectorlegal for tax-deductible contributions. For updates, visit their website at waterprotectorlegal.org, and follow them at Facebook.com/WaterProtectorLegal, Twitter @WaterProtectUs.

National Lawyers Guild
https://www.nlg.org/
Add Your Comments
Support Independent Media
We are 100% volunteer and depend on your participation to sustain our efforts!