Add an Event
Newswire
Calendar
Features
Home
Donate
From the Open-Publishing Calendar
From the Open-Publishing Newswire
Indybay Feature
Publish to Newswire
Add an Event
Related Categories: San Francisco | Labor & Workers
"Reinstate NALC Steward Angela" Protest At SF Against Workplace Bullying/Union Busting
by Labor Video Project
Friday Nov 18th, 2016 2:30 PM
Supporters of NALC 214 chief steward Angela Bibb-Merritt rallied and spoke out at the SF federal building on November 16, 2016 against her suspension and the massive workplace bullying and union busting going on at the post office. Many stewards have been harassed and bullied by management. 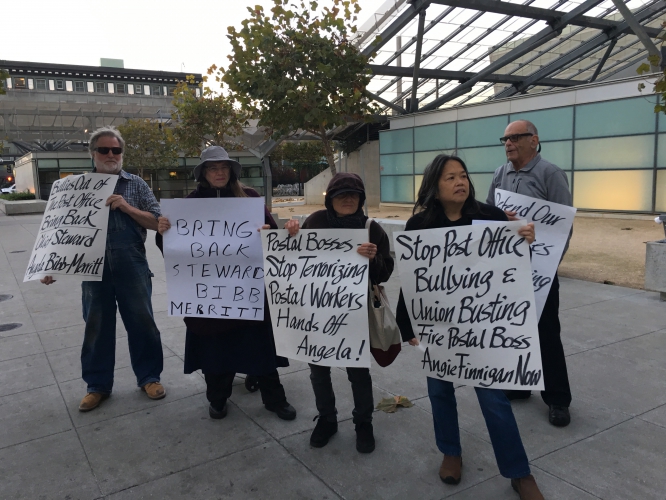 original image (4032x3024)
Supporters of San Francisoc NALC 214 Chief Steward Angela Bibb-Merritt rallied and spoke out on Wednesday November 16, 2016 at the 7th St. San Francisco Federal Building against her suspension and workplace bullying that she faced on the job. The postal managers have been harassing and suspending NALC shop stewards who are defending the membership. Postal workers are also being forced to work 12 to 15 hours threatening their health and safety. The postal management are seeking to privatize and turn the post office into an Amazon non-union operation with slave labor conditions with massive speed-up and no rights on the job. Also musician and retired postal worker Jimmy Kelly sang songs about Angela and labor issues in at the post office and in workers lives.
Additional media:
https://www.youtube.com/watch?v=c8kw1kNB7Yc
https://youtu.be/LI3ZrADYCwc
http://postalemployeenetwork.com/news/2009/05/federal-administrative-judge-has-harsh-words-for-san-francisco-usps-management/
https://www.youtube.com/watch?v=pnjd823fJU8
https://www.youtube.com/watch?v=VGFpntWcKts
Production of Labor Video Project

The US post office management are in a rampage against the workers and the unions. They have been engaged in massive workplace bullying and intimidation to the point that postal workers are even afraid to take the lunch break on their own time because of the harassment and speed-ups. This is not new in San Francisco and there have already been cases of "going postal" by management terrorizing and harassing postal workers.

Part of the aim of the postal bosses is to target the union shop stewards. They are being fired and framed up by management including chief steward Angela Bibb-Merritt and other stewards in San Francisco.

This is also part of the effort to privatize the post office as they outsource and cutback services to eliminate public service jobs for greater profits to the privatizers. This will certainly massively increase with the election of Donald Trump who is already attacking public worker rights and wants to privatize and contract out the entire public workforce to his friends and cronies.

The issue of workplace bullying is also going on against OSHA staff like Whistleblower protection Program investigator Darrell Whitman who exposed the collusion between OSHA management and the corporations that they are supposed to regulate.

One of the cases that most shows the serious systemic problem of workplace bullying is at Wells Fargo Bank where the management coerced and bullied thousands of workers to open up over 2 million fake accounts in order to rip off the depositors. Over 5300 workers were fired and many were fired for refusing to engage in illegal activity. Some of these OSHA complaints went to OSHA worker Darrell Whitman and he was prevented from doing an investigation by his managers. Some are still waiting for OSHA to investigate the illegal bullying and cover-up of illegal activities.

It is time for all public workers and private workers and the entire public to stand up for a health and safe working place and also the protection of union activists including at the post office. San Francisco city workers have faced constant bullying and teachers are being scapegoated and bullied on the job. This epidemic of workplace bullying has to stop and the first step is organizing collectively against it and speaking out to stop it.

If you have been bullied on the job come to the rally and speak out for Angela and others who are being bullied and targeted for doing their jobs.

Whereas, there has been a growing practice of workplace bullying against San Francisco postal workers, endangering their health and safety and impacting their families, and

Whereas, workplace bullying is being used as part of a plan to privatize and destroy the Post Office and other public services, with the goal of eliminating public jobs, as well as to intimidate rank and file workers and as a union busting tactic. However, shop stewards, the front line of the unions, are in many cases putting up a determined resistance to these management abuses, and

Whereas, NALC Local 214 Chief Steward Angela Bibb-Merritt has been issued an emergency suspension and notice of removal, for representing the members of her union and defending workers who have experienced workplace bullying. In addition, other NALC Local 214 shop stewards have been targeted for retaliation for their union activities, and

Whereas, American Federation of Government Employees steward, SF Labor Council delegate, and OSHA Whistleblower Protection Program investigator Darrell Whitman has been targeted by management for his fight against workplace bullying at the agency, retaliated against for doing his job, and ultimately terminated by his employer, and

Whereas, every worker has a right to a healthy and safe workplace, free of management abuse.

Therefore be it resolved, that the San Francisco Labor Council calls on the San Francisco Postmaster to immediately drop the discipline and reinstate National Association of Letter Carriers #214 Chief Steward Angela Bibb-Merritt with full back pay, and

Be it further resolved, that we support a solidarity rally and speak-out to demand reinstatement of Chief Steward Angela Bibb-Merritt, and to build resistance to workplace bullying in the Post Office and elsewhere. The rally will be held at 4:30 pm on Wed. Nov. 16, 2016 at the US Federal Building at 7th and Mission Streets, SF, and

Be it finally resolved, that the SF Labor Council send letters to Congresswoman Nancy Pelosi, Senator Diane Feinstein and Senator Barbara Boxer, calling on them to write the SF postmaster to urge the reinstatement of NALC 214 Chief Steward Angela Bibb-Merritt, and to initiate Congressional and Senate hearings on the epidemic of workplace bullying against workers in the Post Office and other public agencies, as well as at private-sector work sites.
Submitted by National Association of Letter Carriers, Golden Gate Branch 214
https://youtu.be/ioKm4dfQGHY
§Angela Bibb-Merritt At Federal Building Protest Over Suspension
by Labor Video Project Friday Nov 18th, 2016 2:30 PM 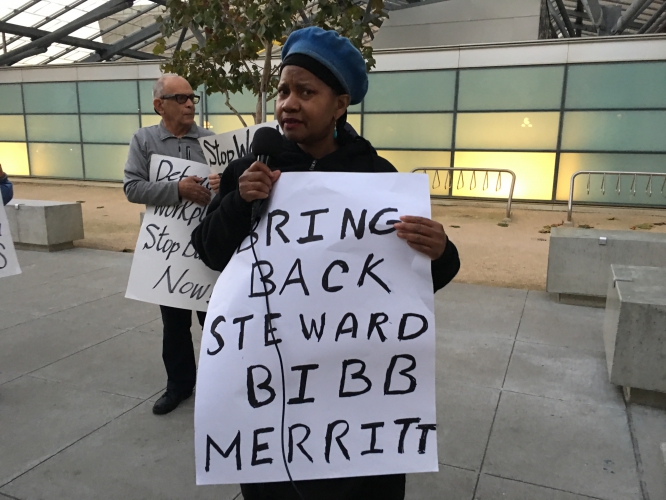 original image (4032x3024)
Angela Bibb-Merritt, the NALC 214 chief steward in San Francisco was bullied, harrassed and suspended for doing her job representing her fellow workers on the job. There is an epidemic of workplace bullying and terrorism on the job at the US post office.
https://youtu.be/ioKm4dfQGHY
§Karen Eshabarr a postal leader of NALC 214 Joined the picket line at spoke
by Labor Video Project Friday Nov 18th, 2016 2:30 PM 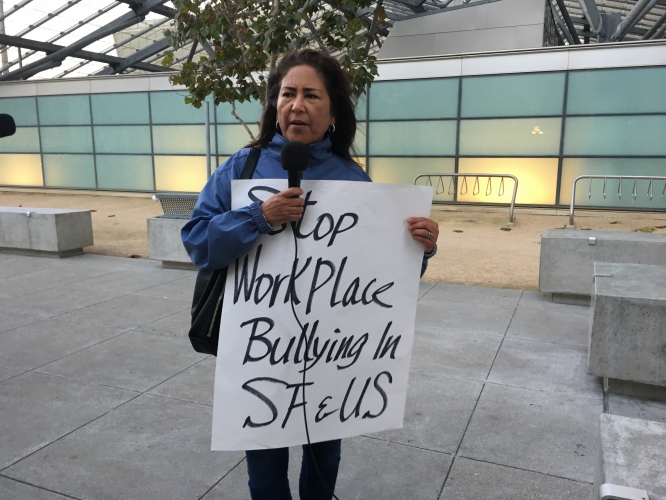 original image (4032x3024)
Karen Eshabarr is a leader of NALC 214 and participated in the picket to defend chief steward Angela Bibb-Merritt. The present union leadership of the local boycotted the rally despite the fact that the local members unanimously endorsed the protest.
https://youtu.be/ioKm4dfQGHY
§Musician and Postal Worker Jimmy Kelly And Angela
by Labor Video Project Friday Nov 18th, 2016 2:30 PM 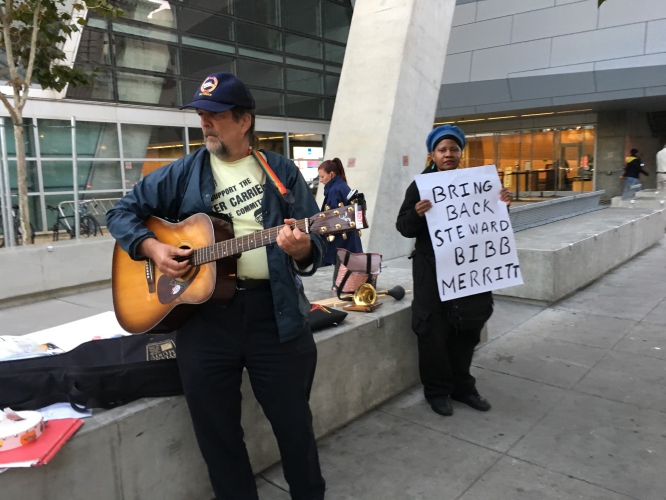 original image (4032x3024)
Labor musician and retired NALC postal worker joined the rally for Angela Bibb-Merritt and sang songs about workplace bullying and union busting.
https://youtu.be/ioKm4dfQGHY
Add Your Comments
Support Independent Media
We are 100% volunteer and depend on your participation to sustain our efforts!