by Dan Bacher
Protesters lined both sides of the street in front of the U.S. Army Corps of Engineers on J Street, proclaiming their solidarity with the struggle of Standing Rock Sioux Tribe in North Dakota and their allies to stop the pipeline that carries fracked crude Bakken oil. 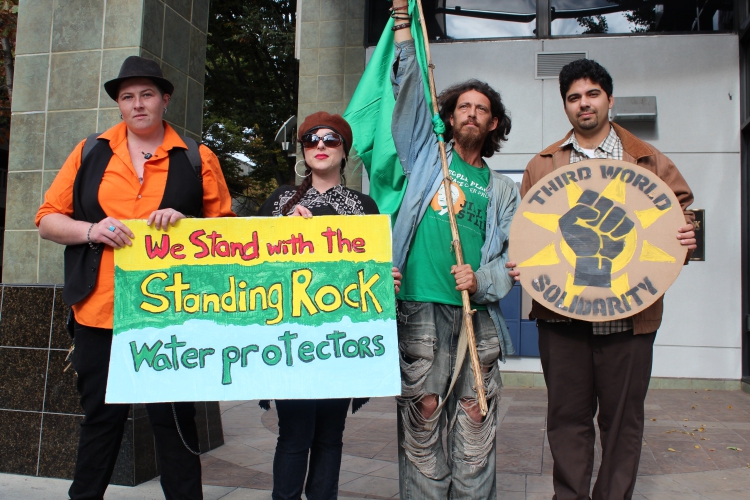 Over 500 Sacramento area residents, including Native Americans, social justice advocates and environmentalists, joined tens of thousands of others throughout the world on November 15 to demand that the Obama administration and U.S. Army Corps of Engineers halt the controversial Dakota Access Pipeline (DAPL).

They lined both sides of the street in front of the U.S. Army Corps of Engineers office on J Street, proclaiming their solidarity with the struggle of Standing Rock Sioux Tribe in North Dakota and their allies to stop the pipeline that carries fracked crude Bakken oil. Many drivers passing by on the busy street honked their horns in support of the protesters.

The protest took place the day after the Corps announced it is delaying an easement for the Dakota Access Pipeline project until it conducts further environmental review and discussion with the Standing Rock Sioux Tribe. The Corps said “construction on or under Corps land bordering Lake Oahe cannot occur because the Army has not made a final decision on whether to grant an easement.”

The Standing Rock Sioux and the water protectors opposing the pipeline are worried that the final Corps decision won’t be made until next year after Donald Trump is inaugurated. Trump’s transition team has vowed to expand offshore and offshore oil production throughout the nation.

“Trump also owns stock worth between $500,000 and $1 million in Phillips 66, which will own a 25 percent share of the finished pipeline. One of Trump's key energy advisers is North Dakota Rep. Kevin Cramer, who has encouraged him to dismantle key aspects of the Clean Water Act, which gives the Army Corps and the Environmental Protection Agency authority to regulate the nation's waterways and wetlands,” Ezinna wrote.

Tuesday’s protest was one of the largest regarding an indigenous struggle ever held in the Capital City. “We had an incredible turnout at our event,” said Chris Brown, an organizer from the Sacramento Climate Coalition. “A special shout out goes to the Nevada County protectors of water, who came out in droves.”

Brown noted that the Corps approved the construction pipeline without proper consultation or adequate environmental studies.

“The Standing Rock Sioux are resisting the DAPL, which threatens their water, ancestral burial sites, and Native sovereignty,” according to Brown. “They have been met with militarized police using automatic rifles, sound cannons, tear gas and mace, flash-bang grenades, bean bag rounds, and rubber bullets. The courage of the Water Protectors has inspired people all over the world.”

"The state of North Dakota has deployed the National Guard, State and Local Police and police from several other states as well as the FBI to protect Energy Transfer Partners, a privately owned pipeline construction corporation,” said Francisco Dominguez (Tarahumara) of Sacramento Area Friends and Relatives of the Lakota Nation. “The last time I checked we were still a Democracy."

Mariana Rivera from the Zapatista Coalition noted the links between the Sioux Tribe’s struggle in North Dakota and struggles of indigenous peoples and their allies to stop the raising of Shasta Dam, the environmentally destructive Delta Tunnels of Governor Jerry Brown and fracking in California.

“Native people are taking the lead on something that concerns us all, protecting our water and land. All of us to need to take a stand with Standing Rock now,” said Rivera.

“Extracting fossils fuels jeopardizes water systems and native rights — and that’s why we’re here in solidarity with them,” explained Alicia Esquivido, a local Greenpeace activist, who was there with fellow activist Trent Pearson.

Rick Guerrero, an SEIU organizer and former president of the Environmental Council of Sacramento (ECOS) Board said, “I'm here to stand with our brothers and sisters in North Dakota. Last week’s election crystallized how our resistance needs to be immediate and sustainable. This destruction needs to be be stopped not only for native people, but for the earth and all workers.”

Before the end of the protest, Carol Standing Elk, Lakota Sioux, met with a U.S. Army Corps of Engineers representative, Tyler Stalker, and several men from the agency inside the office.

"She told us, 'We don’t have anything to do with DAPL; you are are wasting your time,'" said Standing Elk.

“They kept assuring us that their Sacramento office couldn’t do anything. However, I pointed out that they do have the same director in charge of the Corps — and they should know rules and regulations that apply to Tribes,” she said.

Energy Transfer Partners is building the 1,200-mile pipeline to carry fracked crude oil from the Bakken oil fields in North Dakota. The pipeline would run under the Missouri, the nation’s longest river, where a spill would endanger the drinking water for 18 million people.

In a classic case of environmental racism, early plans proposed routing the pipeline close to the city of Bismark, a largely white community. However, when the people there objected because of the danger to their water supply, the pipeline was rerouted near the Standing Rock Sioux Reservation.

DAPL also imperils the world’s climate, with 2015 and 2016 being the warmest years in recorded history. A recent study from Oil Change International showed that fossil fuel projects already in production will carry us beyond the 2° rise commonly considered the maximum allowable to avoid the most serious effects of climate change. “This means we must stop all new fossil fuel infrastructure (e.g., DAPL), and transition to a fossil free economy,” said Brown.

On Monday, the Army Corps issued a statement calling for more study and discussion with the Tribe before it allows the pipeline to cross under Lake Oahe at the proposed location:

"Washington, D.C. – Today, the Army informed the Standing Rock Sioux Tribe, Energy Transfer Partners, and Dakota Access, LLC, that it has completed the review that it launched on September 9, 2016. The Army has determined that additional discussion and analysis are warranted in light of the history of the Great Sioux Nation’s dispossessions of lands, the importance of Lake Oahe to the Tribe, our government-to-government relationship, and the statute governing easements through government property.

The Army invites the Standing Rock Sioux Tribe to engage in discussion regarding potential conditions on an easement for the pipeline crossing that would reduce the risk of a spill or rupture, hasten detection and response to any possible spill, or otherwise enhance the protection of Lake Oahe and the Tribe’s water supplies. The Army invites discussion of the risk of a spill in light of such conditions, and whether to grant an easement for the pipeline to cross Lake Oahe at the proposed location. The Army continues to welcome any input that the Tribe believes is relevant to the proposed pipeline crossing or the granting of an easement.

While these discussions are ongoing, construction on or under Corps land bordering Lake Oahe cannot occur because the Army has not made a final decision on whether to grant an easement. The Army will work with the Tribe on a timeline that allows for robust discussion and analysis to be completed expeditiously.

We fully support the rights of all Americans to assemble and speak freely, and urge everyone involved in protest or pipeline activities to adhere to the principles of nonviolence."

The Standing Rock Sioux Tribe then published the following news release in response to the Corps’ statement:

CANNON BALL, N.D. – The U.S. Army Corp of Engineers today announced they are delaying an easement for the Dakota Access Pipeline project until it conducts further environmental review with the Standing Rock Sioux Tribe. The Corp noted that “construction on or under Corps land bordering Lake Oahe cannot occur because the Army has not made a final decision on whether to grant an easement.”

Standing Rock Sioux Tribal Chair Dave Archambault II said while the decision was not 100 percent what the Tribe had hoped for he said it is clear President Obama is listening. “We are encouraged and know that the peaceful prayer and demonstration at Standing Rock have powerfully brought to light the unjust narrative suffered by tribal nations and Native Americans across the country,” Archambault said.

“Together we can inspire people across America and the globe to honor each other and the Earth we hold sacred,” Archambault said. “Millions of people have literally and spiritually stood with us at Standing Rock. And for this, you have our deepest thanks and gratitude. The harmful and dehumanizing tactics by the state of North Dakota and corporate bullies did not go unnoticed because of you. Not all of our prayers were answered, but this time, they were heard.”

The 1,100-mile pipeline was rerouted towards tribal nations after citizens of North Dakota rightfully rejected it to protect their communities and water. While the pipeline is nearly complete, it required the final easement to drill under the Missouri River (at Lake Oahe) just a half a mile upstream of the tribe’s reservation boundary. The water supply of the Tribe and 17 million Americans downstream are at risk for contamination by crude oil leaks and spills. A single spill would be culturally and economically catastrophic for the Tribe. The Missouri River is the longest river in North America and crosses several states south of the project.

“We call on all water protectors, as we have from the beginning, to join our voices in prayer and to share our opposition to this pipeline peacefully. The whole world is watching and where they see prayerful, peaceful resistance, they join us,” Archambault said.

§In front of convention center
by Dan Bacher 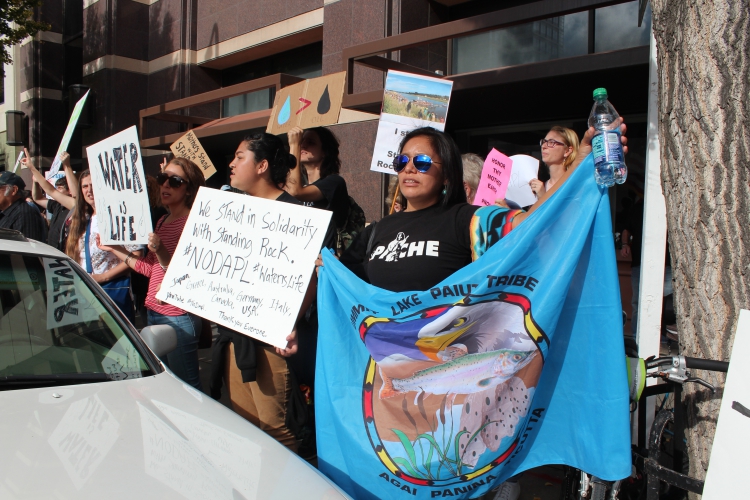 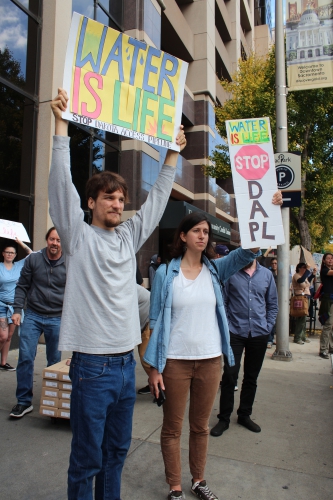 original image (3456x5184)
Water Is Life sign in front of the Army Corps of Engineers in Sacramento on November 15. Photo by Dan Bacher.
§I Stand With Standing Rock
by Dan Bacher 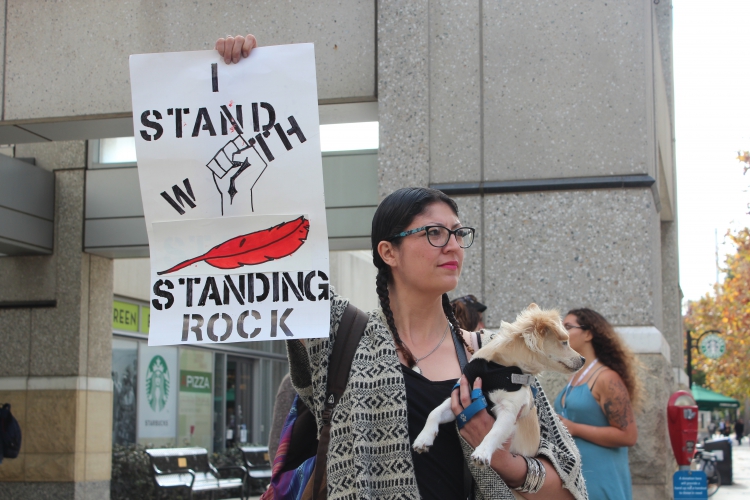 original image (5184x3456)
Woman and her canine friend show their opposition to the DAPL. Photo by Dan Bacher.
§Mini Wiconi
by Dan Bacher 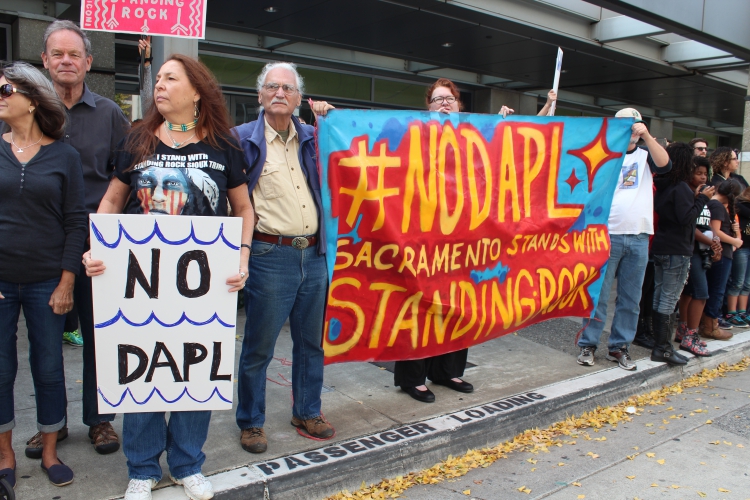 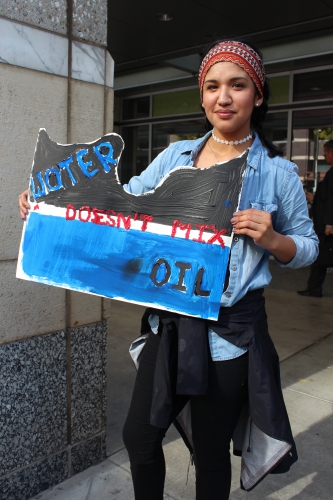 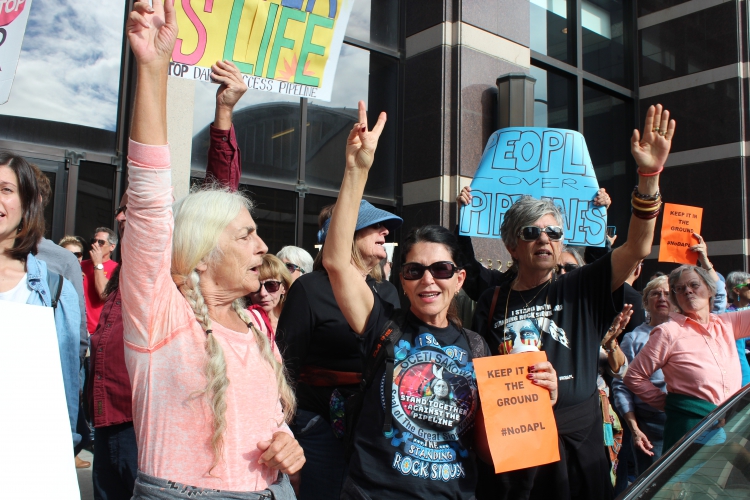 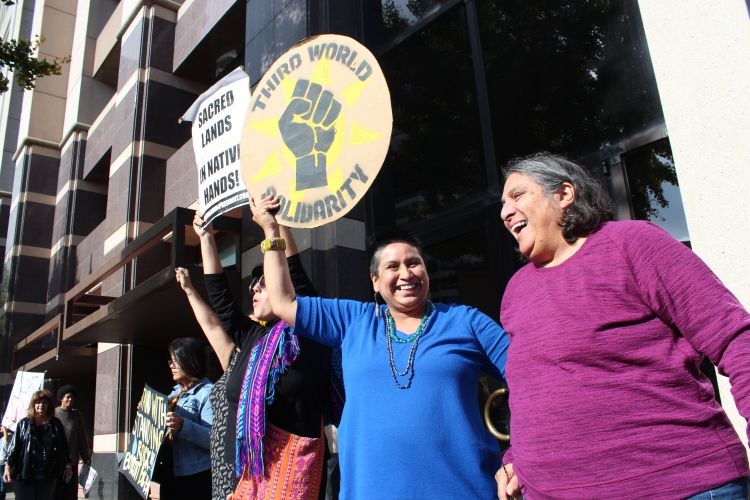 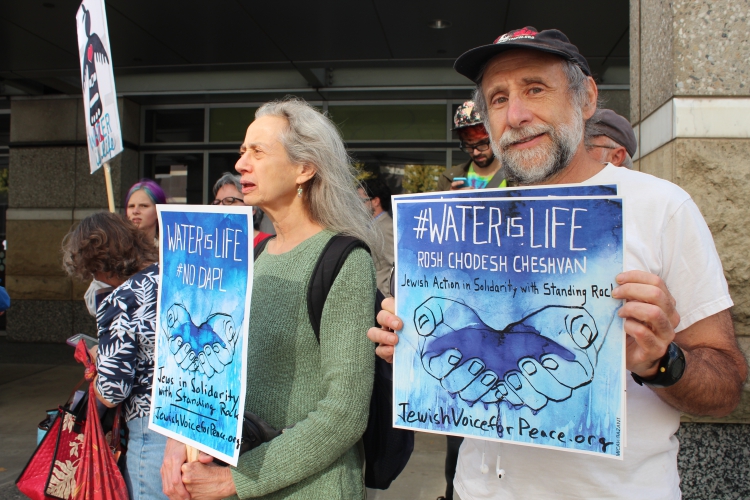 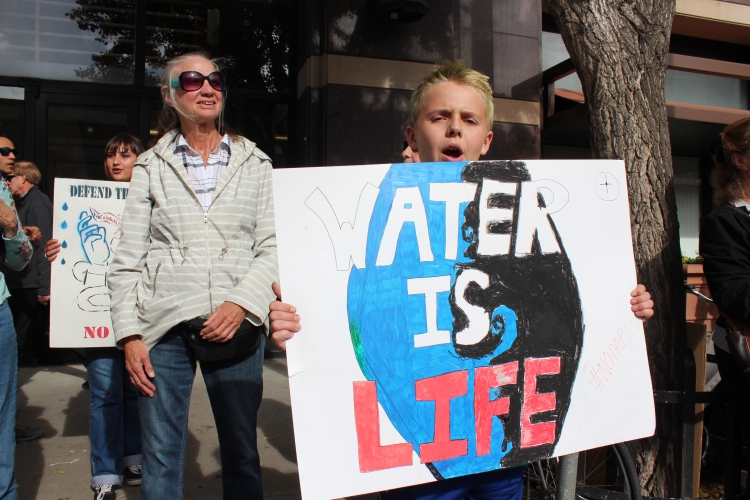 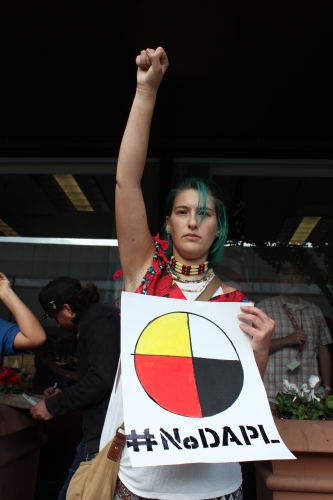 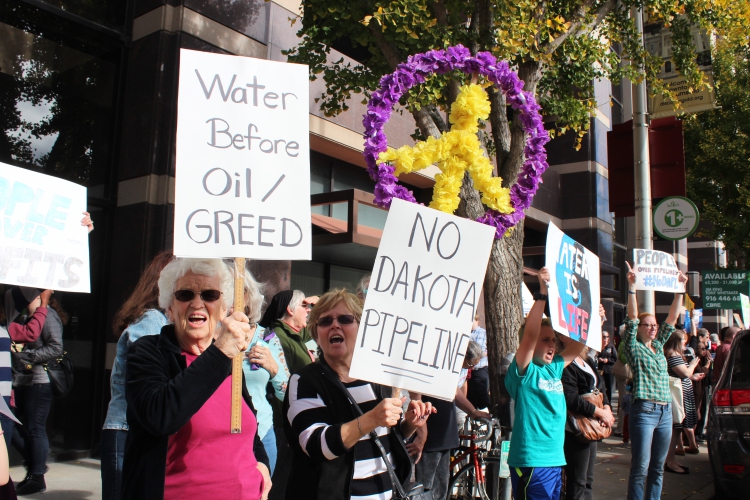 original image (5184x3456)
Water Before Oil/Greed. Photo by Dan Bacher.
§Be The Change
by Dan Bacher 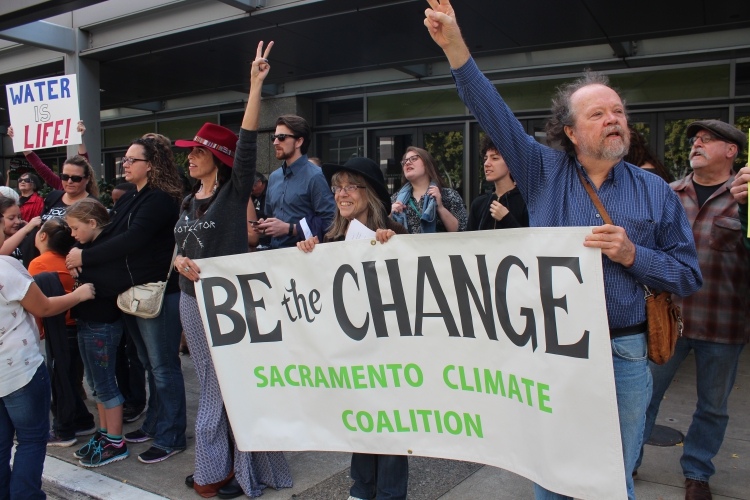 original image (5184x3456)
"Be The Change" Sacramento Climate Coalition banner. Photo by Dan Bacher.
Add Your Comments
Support Independent Media
We are 100% volunteer and depend on your participation to sustain our efforts!