by john Englart (Takver)
Morocco has painted itself as a green leader at this UN climate conference, and in many ways it is, but beneath the surface there are also the stories of pollution and greenwashing which activists have brought to light. 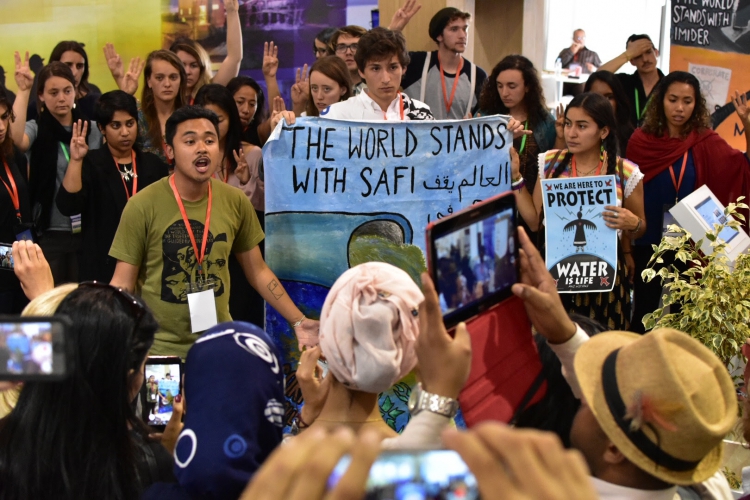 original image (1620x1080)
Activists on Thursday highlighted two of these stories, of heavy pollution of the water at Safi, a town on the Moroccan coast, and at Managem's silver mine at Imider. Water is Life. The phosphate company and the silver mining Company are both sponsors of COP22 that are destroying the water quality, health and life of local communities.

The activists staged a die-in at the Office Chérifien des Phosphates (OCP) pavilion, in protest of the company’s environmental injustices in the town of Safi in Morocco.

Activists simultaneously fell to the ground at the OCP pavilion inside the COP22, sharing the names of locals who have died and suffered miscarriages from mining pollution, and activists who have been assassinated for speaking out against the two companies.

Ryan Camero, a water rights activist from California testified: “I visited Safi, a community suffering from OCP’s unfettered pollution, and am holding the smells, sounds, sights and stories in my heart."

"The phosphate fertilizers produced there result in toxic waste, destroying fish populations and decimating fishery-dependent economies. This waste has killed 9 or 10 people every year, while thousands of gallons per minute create a brown sludge streak along the coast."

"The company behind this, OCP, is not only one of the major polluters here in Morocco but also a sponsor of this year's COP. I see this as horrifying hypocrisy, echoing that of corporations around the world who are trying to profit from the climate crisis.” said Mr Camero.

The activists then moved on to occupy the booth of COP22 sponsor Managem, a Moroccan mining company. They spoke out against the impacts on the water and health of the indigenous Amazigh people of Imider, who have had their subsistence livelihoods disrupted by Managem’s silver mine.

The activists shared song, speeches and chanting: “Protect the water, not corporate greed,” while a large crowd of conference goers assembled to watch. Some Moroccans in the crowd chose to join the protest.

“These simultaneous actions show indigenous and non-indigenous groups and allies from both inside and outside of Morocco coming together to highlight the similarities of environmental atrocities communities around the world face,” said Kayla DeVault, of Navajo Nation, who visited the Imider “Movement on Road ‘96” protest camp in a solidarity exchange during the first week of COP22.

In a sustained encampment similar to Standing Rock in North Dakota, Amazigh men, women and children have occupied the land surrounding the valve of an industrial well for six years, building a democratic village.

“The actions also show how corporate sponsors of the COP contribute to greenwashing while ignoring environmental racism and classism. At the same time, people who live in these corporate sacrifice zones sadly pay with their lives and livelihoods without ever experiencing the privilege to walk into this space [COP22] and draw attention to the injustices committed against them.” said Ms DeVault.

END_OF_DOCUMENT_TOKEN_TO_BE_REPLACED
Add Your Comments
Support Independent Media
We are 100% volunteer and depend on your participation to sustain our efforts!