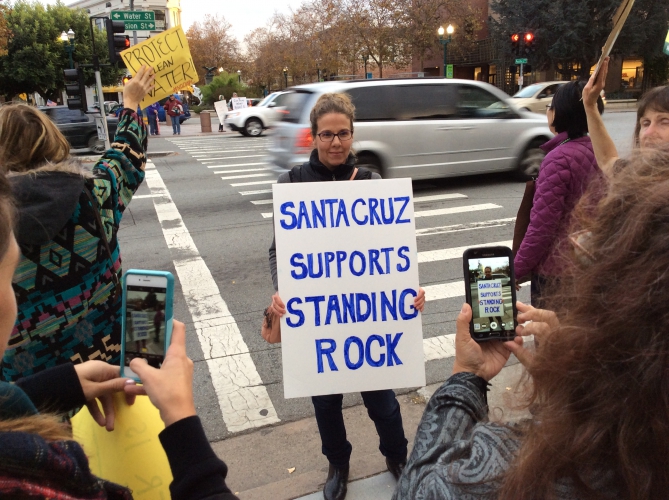 original image (2592x1936)
Nearly a hundred local supporters of the Standing Rock Sioux Tribe gathered at the Town Clock on Tuesday evening for a loud, raucous and joyous celebration of the NoDAPL Day of Action Santa Cruz. Primary organizer Allegra David led the group on a march down Pacific Avenue to full throated chants of "Water is Life" and "You Can't Drink Oil. The group's spirits were somewhat uplifted by the report that the Army Corps of Engineers dealt a blow to the progress of the Dakota Access Pipeline on Monday, saying in a letter that more analysis and discussion with the Standing Rock Sioux tribe is needed before construction can take place under the Missouri River.

At the end of the march, folks formed a circle held hands in the plaza across from the Post Office where Allegra led the group in prayer and a silent vigil in support of Standing Rock. Other local organizers asked people to join the Santa Cruz Stands With Standing Rock Facebook page and pledged to continue the fight for our brothers and sisters on the front lines in North Dakota as winter approaches.
§
by Steve Pleich Wednesday Nov 16th, 2016 1:14 PM 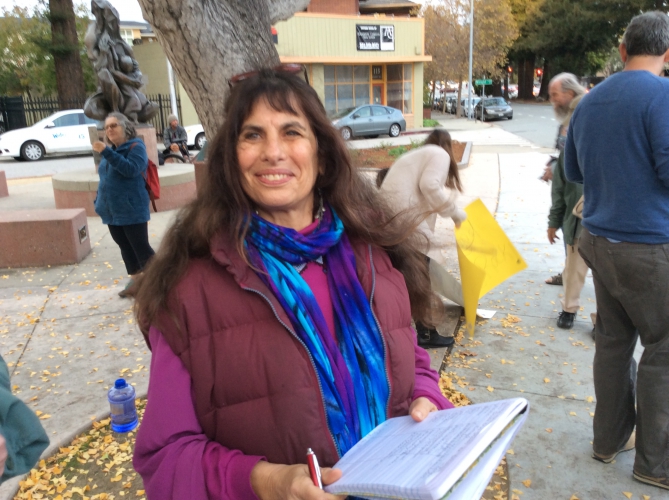 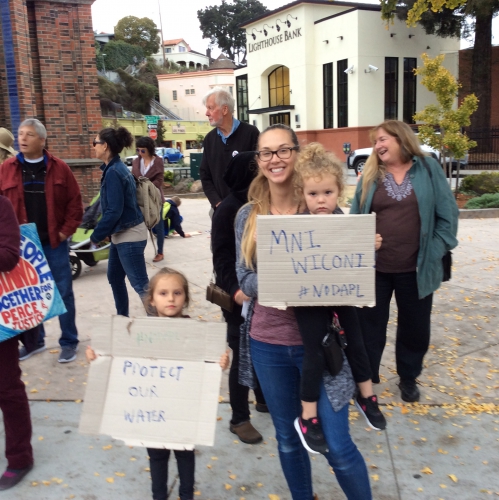 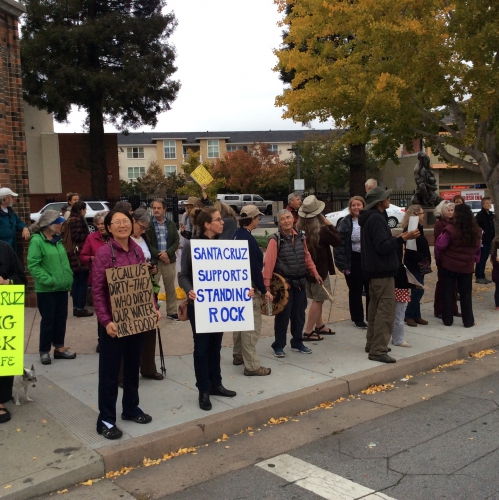 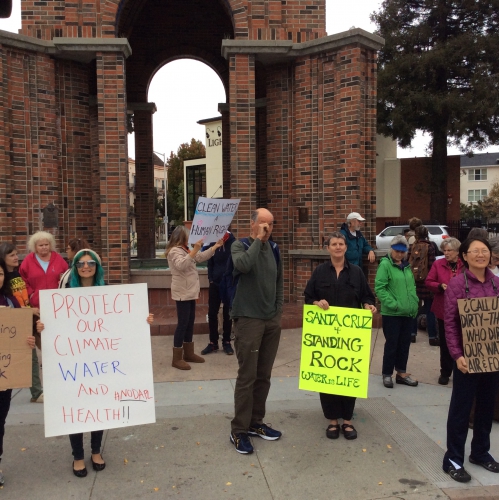 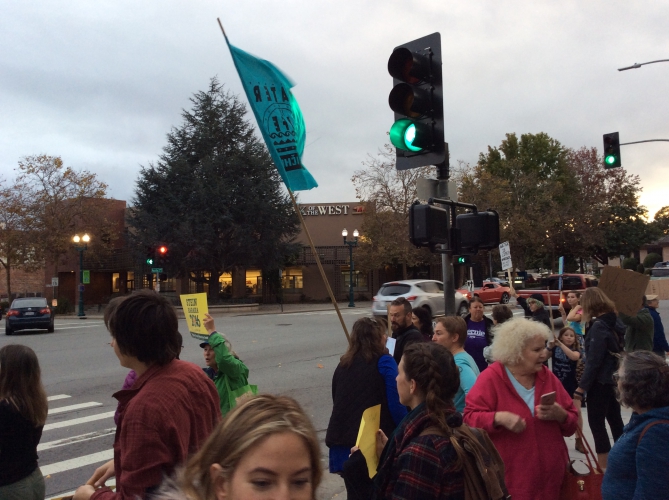 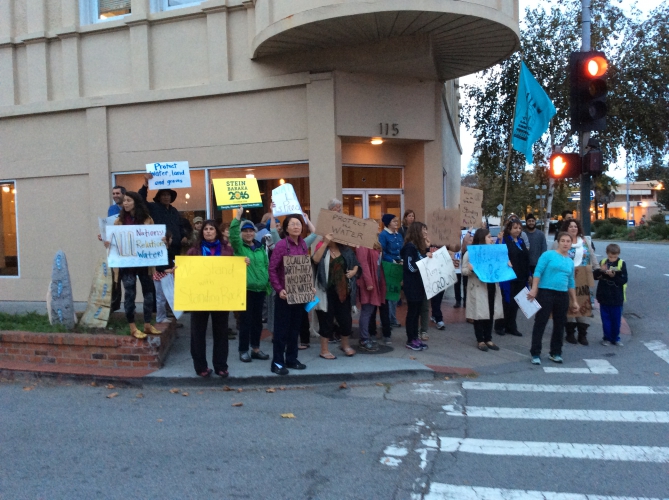 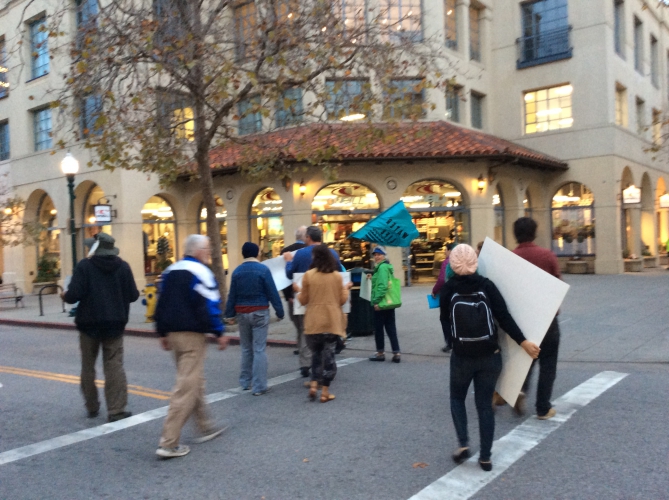 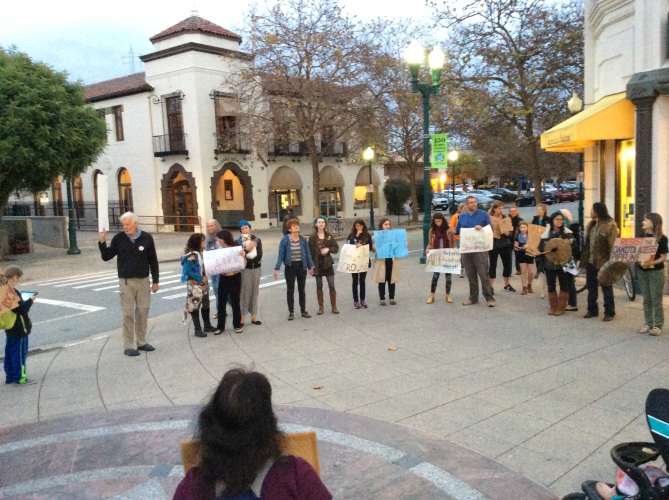 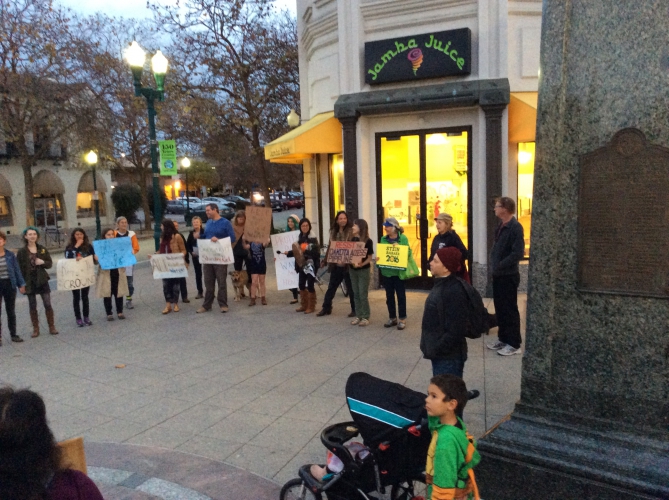 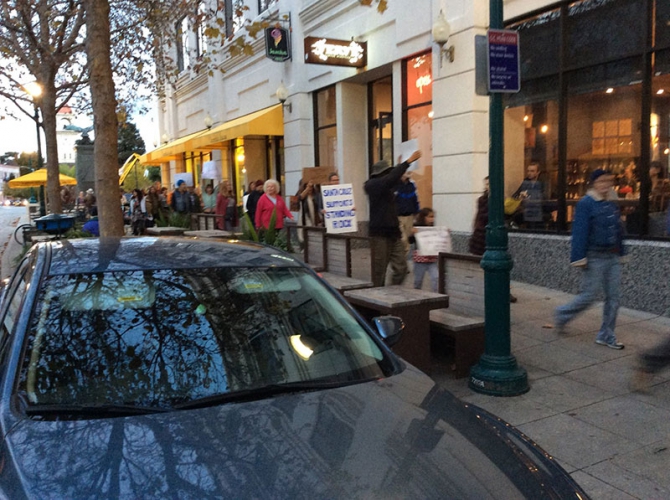 Thanks for the nice report and cool photos. It seems like it was a great event. But it was not "a march down Pacific Avenue."

Both Steve Pleich and AutumnSun state that the group "marched down Pacific Avenue." However, Steve's photos of the demonstration, published on Facebook, tell a different story.

There could obviously be a march at an event without one specifically being called for. But that's not what happened this time. Note that the Facebook event details do not mention or call for a march:

"We are coming together to demonstrate our solidarity with Standing Rock. We will meet at the Town Clock at 4:00. After gathering and circling in prayer, we will walk over the Water Street Bridge and stand in silent vigil sending waves of protection to the Sacred Spirit of Water. Please join us."

The photos of the event do not show a march down Pacific Avenue. The photos show the group walking around the block while staying on the sidewalk.

Thanks again for the report and photos! But please, let's not exaggerate our reporting.

Add a Comment
§But a Purposeful Walk
by Steve Pleich
(spleich [at] gmail.com) Thursday Nov 17th, 2016 2:39 PM
Walk Bloc
You're right of course but we were purposeful and determined to spread the word.
Add a Comment
Support Independent Media
We are 100% volunteer and depend on your participation to sustain our efforts!