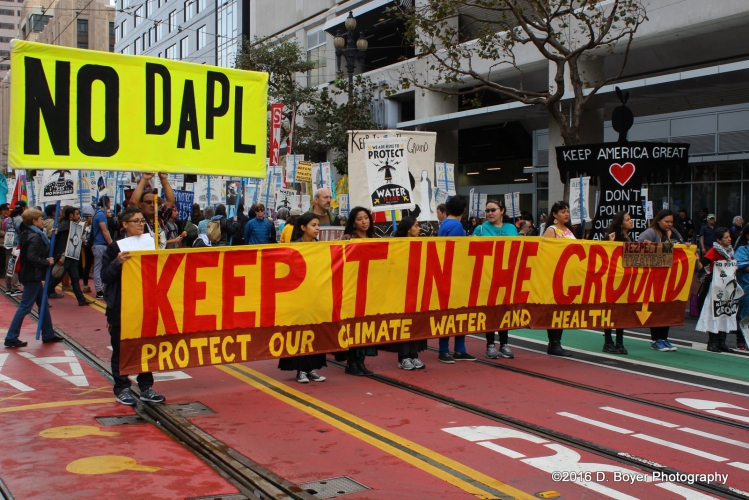 original image (1600x1067)
The following list shows only the oil or gasoline pipelines that have caused environmental disasters in the United States in 2016 alone.
"On February 14, a 6-inch crude oil pipeline broke near Rozet, Wyoming, spilling about 1,500 gallons of crude oil into a creek bed.
"On March 11, about 30,000 gallons of gasoline spilled from a leaking plug on a pipeline, at a tank farm in Sioux City, Iowa.
"On March 22, about 4,000 gallons of gasoline spilled from a 6-inch petroleum products pipeline in Harwood, North Dakota.
On April 2, the TransCanada Corporation Keystone Pipeline was observed by a local resident to be leaking, near Freeman, South Dakota. The cause was a crack in a girth weld, and amount of tar sands dilbit spill was about 16,800 gallons.
On May 20, a Shell Oil Company pipeline leaked near Tracy, California, spilling about 21,000 gallons of crude oil.
On June 23, a Crimson Pipeline crude oil line leaked in Ventura County, California. Initial reports said the spill size was from 25,200 gallons to 29,000 gallons, but, later reports estimate 45,000 gallons of crude were spilled.
On July 6, a Plantation Pipeline line was noticed to be leaking in Goochland County, Virginia. The spill did not reach nearby waterways.
On September 4, a pipeline broke in Kern County, California, spilling reclaimed water & oil.[582]
On September 5, a pipeline in Bay Long, Louisiana was hit by dredging operations, resulting in a spill of about 5,300 gallons of crude oil into the water.[583]
On September 9, a Colonial Pipeline mainline leak was noticed by workers on another project, in Shelby County, Alabama. At least 252,000 gallons of gasoline leaked from line.[584][585]
On September 10, a Sunoco pipeline ruptured near Sweetwater, Texas. About 33,000 gallons of crude oil were spilled. The pipeline was just over a year old.
On October 21, an 8 inch Sunoco pipeline ruptured in Lycoming County, Pennsylvania, spilling about 55,000 gallons of gasoline into the Susquehanna River. The river was running high at the time.
On October 24, a pipeline ruptured on the Seaway Pipeline, in Cushing, Oklahoma, spraying the area with crude oil.
On October 31, a Colonial Pipeline mainline exploded and burned in Shelby County, Alabama, after accidentally being hit by a trackhoe. One worker died at the scene, and 5 others were hospitalized. The explosion occurred approximately several miles from the 09 September 2016 breach."

info source wikipedia https://en.wikipedia.org/wiki/List_of_pipeline_accidents_in_the_United_States_in_the_21st_century#2016
§In solidarity with the events unfolding in the Dakota's
by D. Boyer Tuesday Nov 15th, 2016 5:36 PM 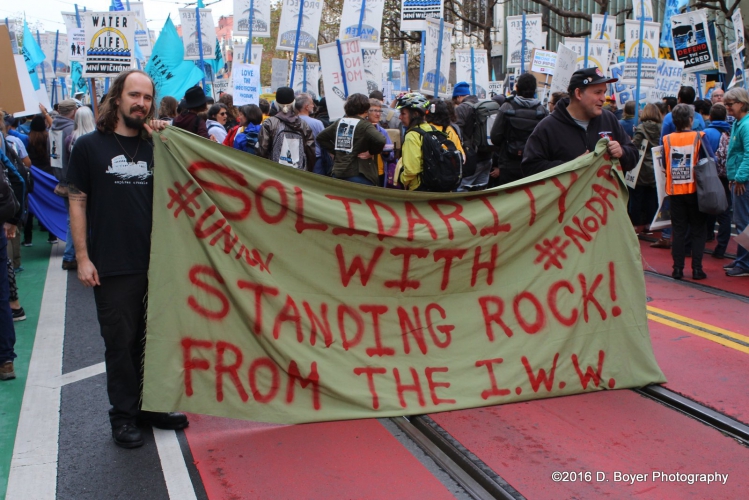 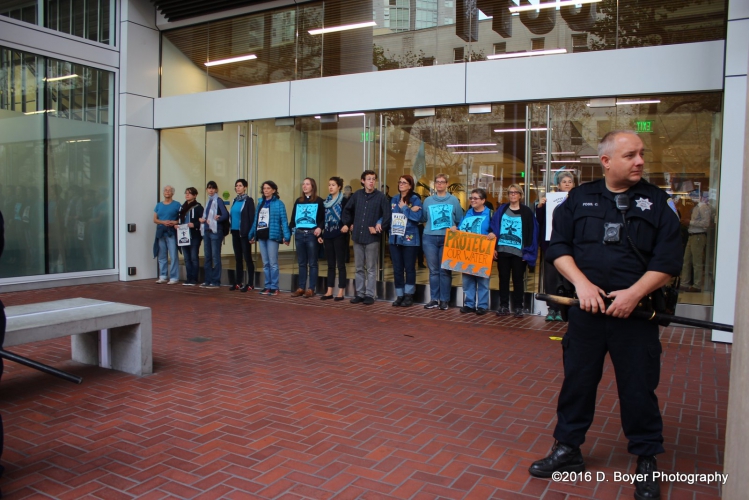 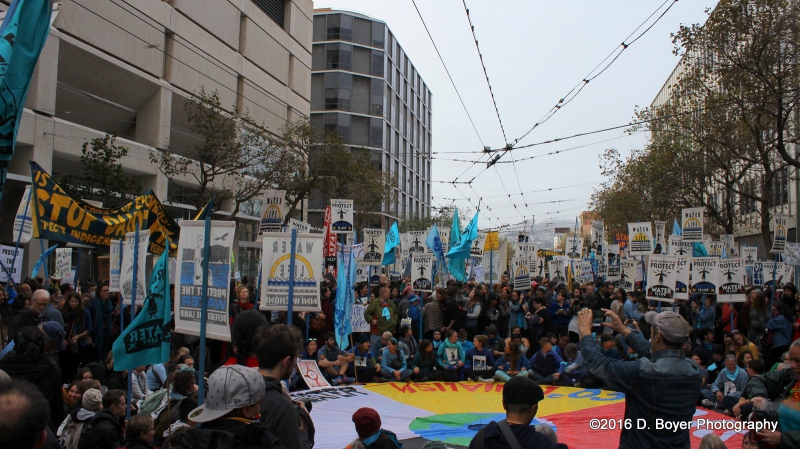 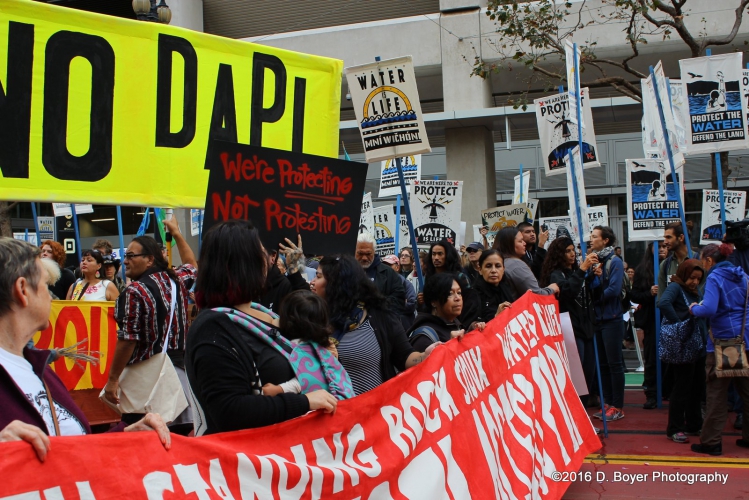 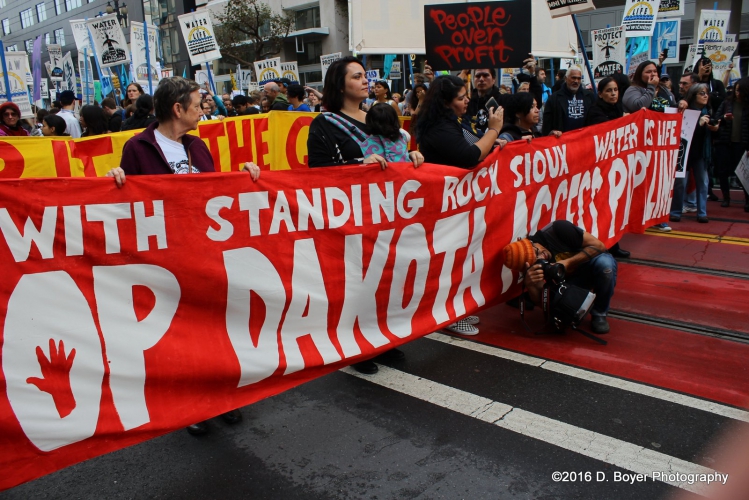 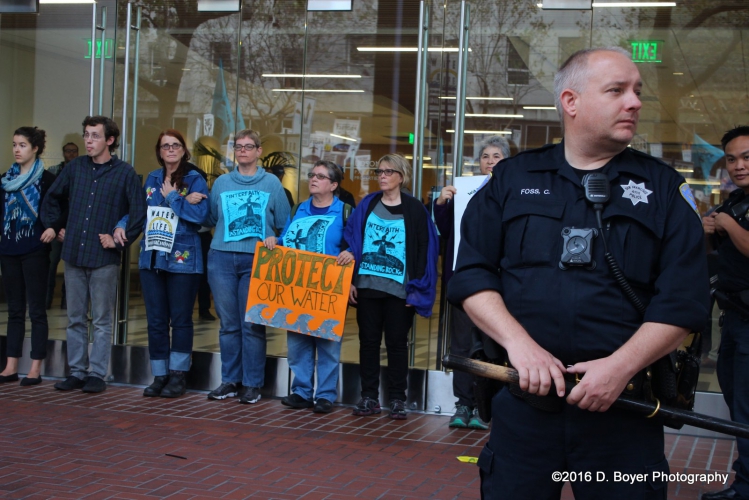 original image (1600x1067)
Please take notice the SFPD Officer is wearing a body camera.
Add Your Comments
LATEST COMMENTS ABOUT THIS ARTICLE
Listed below are the latest comments about this post.
These comments are submitted anonymously by website visitors.