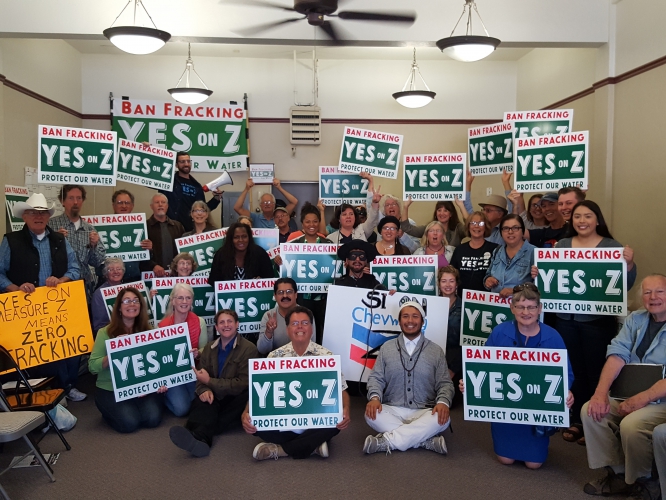 Some members of the coordinating committee made great personal financial contributions to keep the cash flowing. Please DONATE what you can to help put their debt to rest.

The Protect Monterey County coalition sincerely wishes that this victory in a major oil producing county in California will propel and inspire others throughout the state and nation to protect their communities against unhealthy oil & gas activities, and bring us all closer to a clean energy future. Here's a sample of the media attention:

Millions spent on NO on Z did not matter
The Salinas Californian - ‎Nov 9, 2016‎

Passage of Measure Z is a Game-Changer in the Fight Against Fracking
Bay Area Indymedia - ‎Nov 10, 2016‎

It's close but Measure Z appears to pass
The Salinas Californian - ‎Nov 8, 2016‎

It's super-important to gather up those signs!
Although hundreds of Yes on Z signs (including 3 billboards!) disappeared, we put out thousands. Here's hoping you've collected the signs you placed to help avoid the threat of fines and ill will. Call 831-224-3125 for how to recycle.

Now that voters have chosen a president who believes climate change is a hoax, it is more important than ever that communities stick together to protect our people, our resources, and ensure a healthy future for all. We've proven it can be done against great odds. Stay connected!
Add Your Comments
Support Independent Media
We are 100% volunteer and depend on your participation to sustain our efforts!