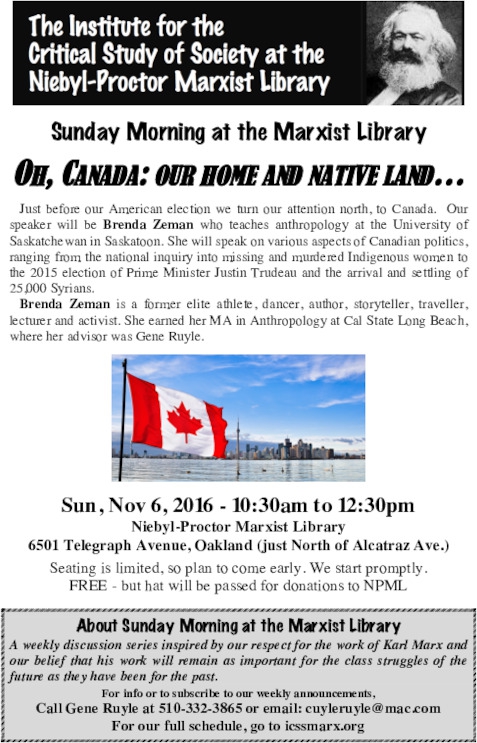 Just before our American election we turn our attention north, to Canada. Our speaker will be Brenda Zeman who teaches anthropology at the University of Saskatchewan in Saskatoon. She will speak on various aspects of Canadian politics, including the August shooting death of Colten Boushie of Red Pheasant First Nation which took place on a farm in Saskatchewan; the Fort McMurray fires and the Husky oil spill into the North Saskatchewan River; Truth and Reconciliation in Canada and South Africa; the new national inquiry into missing and murdered Indigenous women; the 2015 election of Prime Minister Justin Trudeau and the arrival and settling of 25,000 Syrians; Tommy Douglas and challenges to universal healthcare; the September assisted suicide of W.P. “Bill” Kinsella in Hope, B.C.; the changing lyrics to Canada’s national anthem; and what it all means.
Brenda Zeman is a former elite athlete, dancer, author, storyteller, traveller, lecturer and activist. She earned her MA in Anthropology at Cal State Long Beach, where her advisor was Gene Ruyle. A descendent of Slovak homesteaders and Shetlandic/Scots immigrants, she lives in her hometown, Saskatoon, Saskatchewan which sits on Treaty 6 land. Her husband Tommy Lee, grew up in Dynamite Hill in Birmingham, Alabama, will join in the discussion.

END_OF_DOCUMENT_TOKEN_TO_BE_REPLACED
Added to the calendar on Mon, Oct 31, 2016 7:34PM
Related Categories: East Bay | Government & Elections
Add Your Comments
Support Independent Media
We are 100% volunteer and depend on your participation to sustain our efforts!