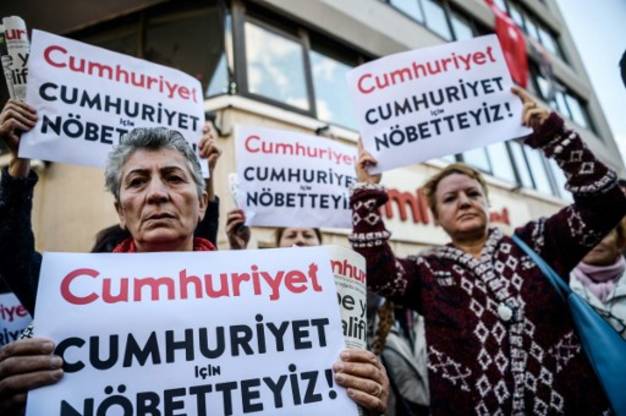 The International and European Federations of Journalists (IFJ/EFJ) today condemned the new wave of media repression by Turkish authorities following the detention of Murat Sabuncu, editor-in-chief of the newspaper Cumhuriyet, arrested this morning together with 15 other media staff of the newspaper.

They are accused of assisting the Fethullahist Terror Organization (FETÖ) and the outlawed Kurdistan Workers’ Party (PKK).

The authorities seized laptops and computers. In Ankara, journalist Güray Öz was taken in for questionning. According to Hurriyet, Turhan Günay, Hikmet Çetinkaya, Aydın Engin, Güray Öz, Musa Kart, Bülent Utku, Mustafa Kemal Güngör, Önder Çelik, Bülent Yener and Eser Sevinç were detained. The police were also searching for Akin Atalay, the head of Cumhuriyet Executive Board, who is currently abroad. Arrest warrants have been issued against 15 journalists and executives of the newspaper.

On Sunday 30 October, the home of Cumhuriyet former editor-in-chief Can Dündar was also raided by the police in the Çengelköy neighborhood of Istanbul. A detention notice was issued against the journalist, who is now abroad following his conviction earlier this year in a case related to the alleged transfer of weapons by Turkey’s intelligence agency to rebels in Syria.

Secretary General of the Council of Europe Thorbjørn Jagland again expressed his great concern about state of emergency measures: “It is highly questionable if the raid against Cumhuriyet can be justified as a proportionate measure, even under the state of emergency (…) Careful distinction must be made between violent or terrorist acts and expressions of opposition or strong criticism to the Government. Freedom of expression constitutes one of the essential foundations of a democratic society”, he said.

In addition, 15 Kurdish media outlets were shut down by decree on 29 October, which brought the number of media outlets closed under state of emergency in Turkey to 168. At least 113 journalists are behind bars. Turkey is now the world’s biggest jail for journalists.

The IFJ represents more than 600,000 journalists in 140 countries

OCTOBER 26, 2016
by: Mehul Srivastava in Istanbul
Police in Turkey have arrested senior journalists and Kurdish political leaders as President Recep Tayyip Erdogan wields his emergency powers to continue a sweeping purge of an already battered opposition.

The decisions, announced by overnight decrees, are the latest in a crackdown on those Mr Erdogan accuses of disloyalty, following a failed putsch in mid-July that revealed the scale of infiltration of the government by followers of a political rival, the exiled imam Fethullah Gulen.

In the months since assuming emergency powers after the coup attempt, Mr Erdogan had purged at least 100,000 employees from the military, various ministries and schools, and arrested and detained thousands of civil servants. The president also changed Turkey’s anti-terrorism legislation, suspending attorney-client privileges between those convicted of terrorism and their lawyers, allowing prosecutors to tape their conversations.

The latest arrests appear to target a broader swath of the opposition. Among those arrested was Murat Sabuncu, editor of Cumhuriyet newspaper, one of the last remaining news dailies not beholden to Mr Erdogan. Fourteen other staff at the title have also been detained. Since the failed putsch, 185 media outlets, many of them Kurdish-language, including one children’s broadcaster, have been closed down, including 15 via the latest decrees.

Turkey’s crackdown on dissent has gone too far
Erdogan is using emergency rule to rid himself of all opponents
There are now 148 journalists in prison in Turkey, 114 of them arrested or detained since the coup attempt. This total far surpasses China and other authoritarian countries.

“Turkey’s outrageous assault on freedom of expression has continued with impunity,’ said Salil Tripathi, chairman of the writers in prison committee at PEN International, a media freedom group. “Independent voices in Turkey are being stifled, as it continues its march of folly towards authoritarianism.”

Mr Erdogan also targeted a group of Kurdish politicians who have vowed to block his plans for a US-style executive presidency, which would give him greater powers. Elected mayors and other municipal officials including one of the country’s most popular, Gultan Kisanak of Diyarbarkir, were formally arrested on Sunday, after being detained for four days without access to lawyers. The leader of the main Kurdish opposition was also barred from overseas travel. All are accused of supporting the Kurdistan Workers’ party, a militant secessionist group.

A further decree issued over the weekend gave Mr Erdogan powers to choose the rectors of all Turkish universities, months after he described hundreds of academics as traitors for calling for a return to a peace process with Kurdish militants.

“It’s a measure implemented to curb Gulenist influence in Turkish universities, which they gained by blackmailing, threatening and pressuring fellow academics,” said a Turkish official.

Mujtaba Rahman, managing director at the Eurasia Group consultancy, said: “This move is about Mr Erdogan’s medium-term objective for an executive presidency, shutting down critical media to help him steer public debate in his favour in the event of a referendum on constitutional reform.

Elif Shafak says it is not Turkey’s writers but the country itself that has deviated from the course of liberal democracy
“It provides some clues of how Mr Erdogan is likely to use the remaining months of the state of emergency to advance his political agenda.”

Mr Erdogan recently reversed a pledge by his allies to limit his emergency powers to a period of 90 days, extending their use by another three months. The decision allows him to continue ruling by decree, issuing decisions that cannot be challenged in the courts.

At the same time, his allies have rushed to finish a draft constitution, which must be submitted to a referendum before it can be approved. Mustafa Sentop, an official with Mr Erdogan’s Justice and Development (AK) party, told newspapers that the draft would be presented to parliament within 10 days, promising a “US-style” presidency.

To secure a referendum Mr Erdogan needs more votes in parliament than his AK party can muster. That has prompted the president to step up his appeal to a nationalist opposition party, and continued crackdown on a Kurdish political party that is firmly opposed to his plans.

Also in the past few weeks Mr Erdogan has arrested Kurdish leaders after having stripped their MPs of constitutional immunity and cut off internet access in Kurdish-majority areas, a move his critics say is designed to stop mass protests.

Eleven people, including executives and columnists of the critical daily Cumhuriyet newspaper, were detained in a series of raids on their homes early on Oct. 31, after prosecutors initiated a probe against them on “terrorism” charges.

According to a list published on Cumhuriyet’s website, detention warrants were issued for 15 journalists, including executive board members of the Cumhuriyet Foundation. The Istanbul Chief Prosecutor’s Office said the operation was based on accusations that the suspects were “committing crimes on behalf of the Fethullahist Terror Organization (FETÖ) and the outlawed Kurdistan Workers’ Party (PKK).”

A detention notice was also issued for former Cumhuriyet editor-in-chief Can Dündar, who went abroad following his conviction earlier this year in a case related to the newspaper’s report on the alleged transfer of weapons by Turkey’s intelligence agency to rebels in Syria.

The house of another writer, Orhan Erinç, was searched but he was not detained due to his age.
Two opposition parties and press groups condemned the raids, saying the move passes another threshold in pressure on dissidents by the Turkish government.

Turkish Deputy Prime Minister Numan Kurtulmuş said the detention warrants issued against daily Cumhuriyet’s employees only targeted the daily’s foundation board members and were a result of a probe initiated by Istanbul prosecutors on Aug. 18.

Saying today’s operations were the outcome of an investigation that began months ago, Kurtulmuş added that the legal proceedings were part of an ongoing process and that it would not be correct to express any opinion during the current process.

Today’s detentions, however, involved names who are not just members of the Cumhuriyet Foundation’s Executive Board but also journalists working at the daily.

AP Photo
Istanbul police raided the house of Can Dündar in the Çengelköy neighborhood of Istanbul, the former editor-in-chief of daily Cumhuriyet, as part of an operation against the newspaper on Oct. 31.

Police could not find anyone at home, but Can Dündar’s wife, Dilek Dündar, flew from İzmir to Istanbul to open the house to police.

The police search was completed at noon on Oct. 31.

The raid came amid the detentions of at least 12 Cumhuriyet journalists and executives on charges that the suspects were “committing crimes on behalf of the Fethullahist Terror Organization (FETÖ) and the outlawed Kurdistan Workers’ Party (PKK) even if the newspaper was not a member in them.”

Judicial authorities also issued a warrant for Can Dündar, a former editor-in-chief of Cumhuriyet who became a bête noir for the government by printing a story about how Turkey’s intelligence agency was allegedly sending weapons to Syria. Dündar was sentenced to five years in jail for a story on the arms transfer on the same day that he survived an assassination attempt outside an Istanbul courthouse. Dündar left the country during the appeals process, but Dilek Dündar was subsequently prevented from going to visit him when Turkish authorities revoked her passport.

An Istanbul court has also accepted an indictment against Dündar on charges of “printing and publishing terrorist organizations’ statements” during a one-day editorial stint undertaken in solidarity with the now-closed daily Özgür Gündem.

He said last month that he would not surrender himself to Turkish courts because he had lost faith in the judiciary after the failed July 15 coup and the subsequent state of emergency declared by the government.
October/31/2016
http://www.ifj.org/nc/news-single-view/bac...
§Turkey Banned Twitter in the Past
by repost Monday Oct 31st, 2016 6:32 PM 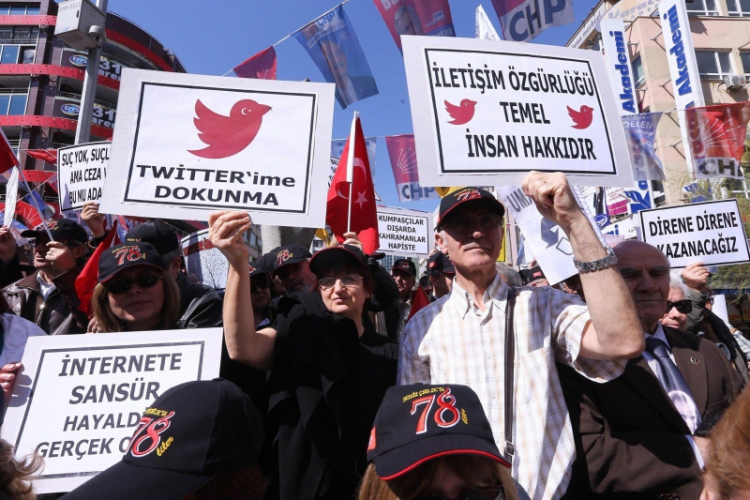 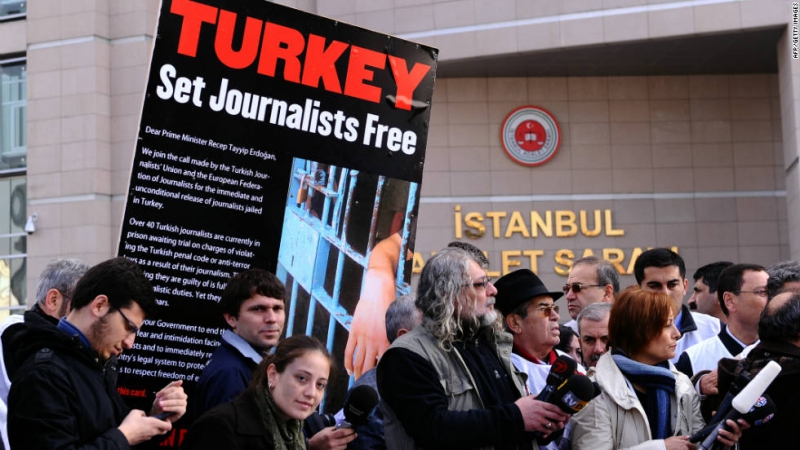 original image (980x552)
There are more journalists arrested and in jail in Turkey (140) than any other country in the world.
http://www.ifj.org/nc/news-single-view/bac...
Add Your Comments
Support Independent Media
We are 100% volunteer and depend on your participation to sustain our efforts!